Vice President for Advancement Kirk Shisler said the event is one small way to thank the many alumni and EMU community members for their philanthropic support. “It is especially gratifying to know that more than 3,200 donors and alumni stand strong with EMU and the bold mission we serve,” said Shisler. “We are in the final months of Phase II of the Suter Science Center renovations to support our growing engineering program and thriving science majors, and our University Fund and other projects continue to benefit from a very loyal core of alumni donors and individual friends of the university.” This year’s banquet was scheduled between a host of other Centennial-related activities: many guests came across University Commons from the Margaret Martin Gehman Gallery which hosted an art exhibit reception, and an expedited program after the dinner left time to walk across campus to Lehman Auditorium for an evening performance of the Centennial play.

“I don’t just see donors and supporters,” President Susan Schultz Huxman noted in her keynote address. “I see mission-makers and game-changers. I see bold visionaries, and third-way kingdom-builders, people who see a different kind of return on their investment in giving to EMU.”

Huxman offered listeners an overview of the institution’s Centennial history, drawing four parallels between the pioneers of 1917 and those carrying on the legacy in 2017.

“The similaries between then and now are striking and comforting,” she said, “a reminder that the apple seed does indeed bear an apple tree.”

Creation care was important then, with one of the first standard courses offered being soil study and crop production, and now, as EMU curriculum and facilities continues to prioritize sustainability.

The university’s first woman president also pointed out that the class of 1917 included four women and three men, learning together in a co-educational environment long before many colleges in the state valued such equity.

And the spirit of rigorous intellectual inquiry continues today, she said, as was shown early in the exhaustive search for the first president, a portion of whose favorite quotation from Alexander Pope appears on the banner of the first literary society. “That expectation of high-end academic achievement has always been the abiding ethos at EMU.”

“Happy birthday, EMU!” Huxman concluded. “May you flourish for another 100 years as we bring scholarship, service and shalom to the Shenandoah and beyond.”

Ghale, who moved to Virginia from Nepal at age six, said her choice to attend EMU had been clear for some time, based on high reviews of the nursing program. As a student, she’s been “greatly blessed” by professors of high character, small class size, the community atmosphere, and opportunities for extracurricular and spiritual involvement, including her recent cross-cultural experience in Guatemala and Colombia.

These programs “would not be available for students like me, without everyone’s generous donation to EMU,” she said. “I want to thank you all individually, with a grateful heart for your thoughtful and kind-hearted gifts to this wonderful school that I have come to call home.”

After returning from a three-year international service assignment with Mennonite Mission Network, Showalter took an online course at Eastern Mennonite Seminary with Dorothy Jean Weaver. Her calling, she says, was soon revealed. Showalter benefited from a ministry leadership scholarship, an investment both in her and in the future of the church.

Now associate pastor at Shalom Mennonite Church in Harrisonburg, Showalter urged those gathered “in the community united by EMU” to “each find a way to share our gifts with one another, equally beloved participants in the Kingdom of God.”

The donor banquet was sponsored by Sentara, BB&T and ColorQuest Custom Printing. 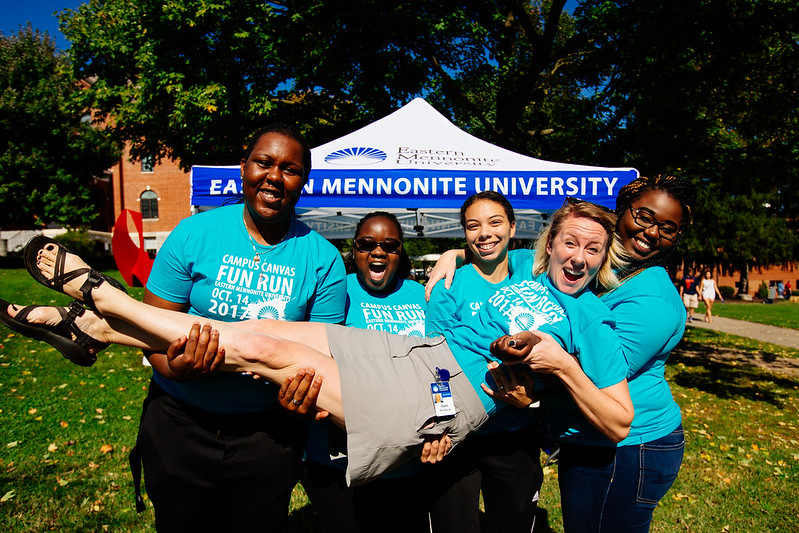