Eastern Mennonite University students with common interests can propose to “live” these themes in an intentional community setting on campus. Currently, two houses – Eshet Chayil and Light House – promote student leadership and meditative spirituality, respectively. The Theme Housing program, which began in 2015, provides juniors and seniors with an alternative to living in the residential halls.

Theme houses are “an opportunity to have, primarily, senior students who want to stay on campus be engaged and give back to the community,” says Lead Residence Director Scott Eyre. His department has seen in theme house residents “a desire to connect senior and upperclass students with incoming freshman.” These juniors and seniors have resources and camaraderie, developed over three years of campus involvement, to offer the underclassmen, explains Eyre.

Each year, three on-campus houses are available for group living. The program continues a tradition that started in the 1970’s when students, and sometimes faculty and their families, lived together.

The application process includes a mission statement, house goals, individual statements of interest, and a theme description including community impact. Potential groups should notify Residence Life by early January for their application to be considered for the following academic year.

Eshet Chayil, meaning “woman of valor” in Hebrew, was first envisioned by senior Janaya Sachs, who shares the house with six other women. The phrase comes from A Year of Biblical Womanhood, by Rachel Held Evans, who visited campus in 2014. The house was also inspired by last year’s theme group in the same building, Bridge House.

Current resident Elisabeth Wilder says that “all of the women who lived in Bridge House were prominent figures on campus in various leadership roles. They tried to create a space to bridge the gap between different groups of people, and I think they achieved that goal.” [Read about former resident Jolee Paden ’16 here.]

“We want to be a positive presence on campus in everything that we do,” says Wilder. “We are here to meet student needs in whatever way we can.”

Light House, a men’s residence, formed to provide students alternative, meditative spiritual experiences. They host structured discussions over a soup dinner on Thursday evenings and Quaker-style meetings on Sunday mornings. Thursday discussion topics have included neuroscience, sexuality in the Mennonite church, and rhetorical use of the words violence and nonviolence. Sundays’ meetings are geared more towards introspection than dialogue – “an hour of quiet contemplation modeled after the Quaker tradition,” says house member Clay Cordell.

“For those who aren’t familiar with the Quakers, Sundays at our house may seem strange at first,” Light House announced in an invitational email. “The central idea behind what we will be doing is that what some would call ‘prayer’ happens on a two-way street, and we can expect to encounter the Divine when we quiet our minds and bodies.”

“I thought it would be great to host a space where discussion and meditation were at the center of the experience,” said house member Samuel Saxton. “We appreciate EMU giving us this opportunity.”

These are not the first intentional living spaces on campus. The Shenandoah yearbook first mentions group-house living in 1971, when 53 women and seven cats were divided up among Martin House, Suter House and Birchwood. The following year, a student group named “Middle Earth” formed. The 1973 yearbook indicates two intentional communities on campus: Arbor Vitae, a student group living with a faculty couple; and Gemeinschaft, a conglomeration of married couples, children, and single students. Gemeinschaft’s intention was “the practice of observable love,” said Richard Showalter, an instructor of Biblical studies who lived in the house.

Martin House, which was torn down in 2013, was one of the first such houses in the ‘70s. Keith Gnagey ’76, executive director of the Harrisonburg-Rockingham Free Clinic, lived there in one of the first faculty-student groups.

“It was wild! There was no night,” says Gnagey.

In the 1975–76 academic year, nine students shared the house with two faculty families. “It was quite a commitment and quite an undertaking for faculty to move their families into this setting,” says Gnagey.

He remembers staying up until midnight studying, then deciding to bake bread – the smells of which wafted through the house at 4 a.m., “causing a major disturbance!” But generally, “good food and great conversations” made for a rewarding, if challenging, experience living in close quarters.

One of the live-in families that year was Loren Swartzendruber, former EMU president,  his wife Pat, and their then-infant son, Tim Swartzendruber.

Assistant Director of Housing Matthew Hunsberger also lived there as a student.

“I had a wonderful experience living with a group of 13 students, and we’ve even had a few reunions over the years since then,” says Hunsberger. 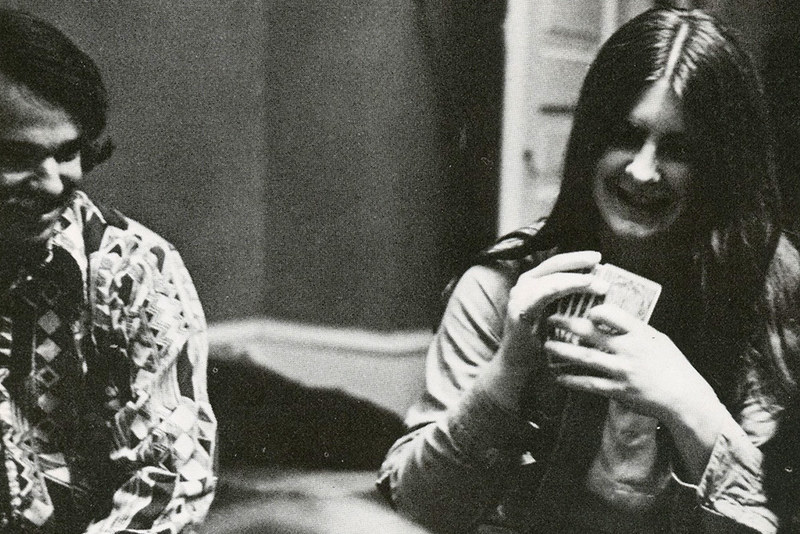