Twenty-four leaders from Morocco and the United States met at Eastern Mennonite University Feb. 10-13, 2011, with a smaller follow-up session at Georgetown University on Feb. 14, in a quest for better understanding between Morocco’s Muslims and America’s evangelical Christians.

Richard Cizik, a prominent Christian evangelical lobbyist in Washington, D.C.,, conceived of an extended series of interactions in an environment where all would feel comfortable. He asked EMU, a Christian university known for its international peace work, to host the multi-day exchange on its main campus, two hours west of Washington D.C. 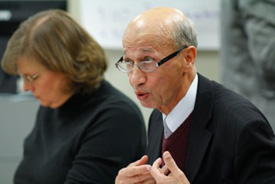 Driss Alaoui- Mdaghri, a prominent civil society leader who has held four different cabinet positions in the government of Morocco Rick Love, president of Peace Catalyst International and a consultant to Vineyard USA 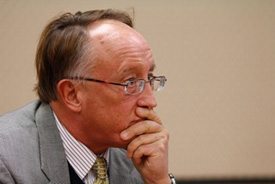 Michael Kirtley, president of the Friendship Caravan and founding member of The Casablanca Institute

Cizik is former vice president for governmental affairs at the National Association of Evangelicals. In 2010, he launched the New Evangelical Partnership for the Common Good, one of the sponsors of the meeting. He also co-chairs The Casablanca Institute, the other sponsoring organization, with Driss Alaoui-Mdaghri, a prominent civil society leader in Morocco.

“With the fall of the Soviet Union, there has been an effort to make Muslims here and abroad into the new ‘evil empire,’” said Cizik after the meeting. “This is not only a huge mistake on the strategic level – playing right into the hands of terrorists – but a violation of biblical ethics.

“Evangelicals must have serious religious dialogue with Muslims here and abroad and reach out with Jesus’ love in acts of compassion and service,” he added. Cizik called Morocco “an excellent partner in this exchange,” crediting it for a “long history of religious tolerance, interfaith outreach, and friendship with America.”

The by-invitation-only meeting drew a contingent from Morocco, which included:

The Moroccan ambassador to the United States, Aziz Mekouar, traveled from his base in Washington D.C. to participate.

The U.S. component of the gathering included:

The group was rounded out by a retired U.S. diplomat with extensive experience in the Muslim world, leaders from the Islamic Society of North America, a public health expert of Iranian background, several experts from different universities, two Christians who have created media productions on Muslim-Christian relations, and a half-dozen representatives of EMU, including its president and provost.

The group began by viewing a documentary, “Countdown to Zero,” on the threat to the world posed by the continued existence of massive amounts of nuclear arms around the world. The viewers quickly established that they shared a common interest in promoting nuclear disarmament, reducing the threat of terrorism and thus the possibility of nuclear-armed terrorists, and working for greater harmony in the interests of mutual security.

From this common ground, the group moved into a series of discussions – carefully facilitated by a Muslim woman and a Christian man, both based in the United States and both selected by EMU – that uncovered some sensitive subject matters, including different understandings of the meaning of religious freedom.

Despite the touchy subject matter, an atmosphere of respect and cordiality was maintained throughout the days of interactions and presentations, leavened by shared meals, coffee breaks, and touring of Thomas Jefferson’s Monticello. Afterwards Alaoui-Mdaghri said, “It is always a pleasure to find people who are open-minded in spite of many pre-conceived ideas about the other. We all strived not to impose our ideas, but rather to offer them as food for thought. I believe many of the problems between Christians and Muslims are more artificial than real, and suffer from lack of discussion about them.”

During an early session, Eric Patterson cited the findings of a 32-member Chicago Council task force (co-chaired by Cizik), as reported in Engaging Religious Communities Abroad: A New Imperative for U.S. Foreign Policy (2010). He noted that “religion is often used by extremists as a catalyst for conflict and a means of escalating tensions” and that insensitivity to this reality had caused bloodshed in many areas of the world.

While acknowledging the need for sensitivity in cross-religious interactions, Patterson asked that Morocco also recognize that many Christians view talking passionately about their faith as a being part and parcel of certain universal human rights, including the right to practice freedom of speech.

In response, Noureddine Sefiani moved beyond the focus on religious actors by presenting a paper advocating for greater consultation with a wide array of civil society leaders before foreign policy decisions are made.

Through presentations on their history, economy, and politics, the Moroccans stressed that their society was based upon hundreds of years of largely harmonious relations among Muslims, Jews and Christians. They pointed out that the King of Morocco had refused demands to hand Moroccan Jews over to the Nazis during World War II and sent more than 300,000 Moroccans to fight alongside the allies. The Moroccan presenters reached back far into history to note that Morocco was the first to recognize the United States as a sovereign nation in 1777, followed in 1786 by a treaty of peace and friendship. It is the longest unbroken treaty of its kind in U.S. history.

Their overall message was that they did not want this friendship jeopardized – and their own society made unstable and less religiously tolerant – through misunderstandings created by those who don’t understand this history of friendship and who treat Moroccan laws and values with disrespect.

The Moroccan participants emphasized that Morocco’s laws reflect the sensitivities of its citizens and are passed by their representatives in Parliament. They stressed that the Moroccan people view Christian proselytizing as being disrespectful, especially if it is done deceptively in a covert manner after the proselytizer has entered Morocco under other pretenses, such as starting a business or obtaining an education.

A Christian minister who lives and works openly in Morocco made an impassioned appeal that the covert missionary model needs to be abandoned in favor of alternative models for Christian ministry in Muslim societies.

The purpose of the three-day encounter at EMU was not to arrive at agreement among all present, but rather to permit all involved to understand each other’s viewpoint better. Cizik said more meetings and events will be organized. Reflecting on the exchanges later, Cizik noted that The Casablanca Institute could be an ideal forum for facilitating this kind of exchange.

Cizik said he approached Eastern Mennonite University (EMU) about hosting the encounter because he was aware that EMU housed the world-recognized Center for Justice and Peacebuilding and had earned respect from both Muslims and Christians for its “theology of presence.”

In addition, one of EMU’s graduates – a former Fulbright student who holds a master’s degree in conflict transformation – is now a counselor in the Moroccan embassy in Washington D.C. and was able to affirm the cross-religious respectfulness of EMU.

The Casablanca Institute was launched in 2010 with a vision to be a think tank based simultaneously in Casablanca, Morocco, and in Washington, D.C. Its stated mission is to promote interfaith dialogue and action among various groups in the United States and Morocco, expanding to other nations in the future.

The event was co-hosted by two EMU programs, the Center for Justice and Peacebuilding, directed by Lynn Roth, and Abraham’s Tent, a Center for Interfaith Engagement, directed by Ed Martin.