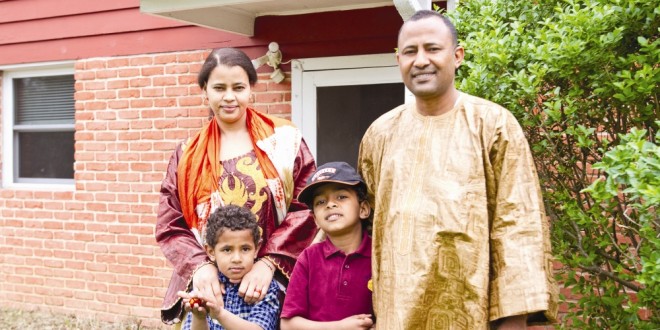 At the end of his first year as a Fulbright scholar at CJP, Abou Ag Ahiyoya of Mali said he has been impressed with CJP’s emphasis on transformation at the grassroots level.

“Until now, I have seen a top-down approach for solving problems,” Abou said in a May 2011 interview with Peacebuilder.

Abou comes from the Tuareg ethnic group, who traditionally live nomadically in the Saharan interior of North Africa. The famous Berbers of Morocco are part of this same group.

Though Abou was raised with family members who continue to lead the nomadic life in the dessert – to this day, his mother herds her own camels, goats and sheep across a vast territory – Abou went a different route. He pursued higher education and became a high-ranking police officer at age 27, initially in Mali.

He was one of the leaders of the civilian police force dispatched to the Darfur area of Sudan by the African Union from 2005 to 2007. By 2008, he was deputy director of the National Policy Academy in Mali. As a police instructor and trainer, he has worked with the United Nations. He has been a consultant and facilitator at the Pearson Peacekeeping Centre in Canada.

Despite his impressive credentials, Abou does not present himself as someone who “knows it all”— that is, as someone who prefers issuing commands rather than listening thoughtfully. Instead he seems like the type of kindly and thoughtful person that anyone would want as a neighbor, friend, father, or brother.

Abou speaks of walking 10 to 15 miles to attend a French language school as a child and of being 11 when he lost his father, an army soldier, to sickness.

Abou explains that after Mali started shifting to a democratic political system in 1990, its police force began to open itself up to minority peoples. Abou was one of the first Tuareg persons to rise to a senior police position.

At CJP, Abou says he is trying to gain a deeper understanding of the roots of conflict – and ways to mitigate it, short of using force that contributes to the cycles of violence. “I want to be a peace officer in the future,” he says. “Our prisons are full – the police and courts cannot guarantee stability and peace.”

“The AQMI [Saharan terrorists inspired by al-Qaeda] are recruiting lots of our youths because they don’t have jobs. We need to address the causes of terrorism and solve problems from the bottom up.”

Abou has seen a society that represents, for him, the worst possible social degradation. It was in Darfur. There for a while, Abou was the acting chief of police operations under the African Union, serving a vast refugee population and supervising almost 1,000 officers from about 25 African countries.

He dealt with killings, rapes, and other crimes on a daily basis. He saw children growing up without families, and tens of thousands without real homes. “I witnessed the consequences of war – I don’t want this to happen to any community or country,” he says in a soft-spoken voice.

With Abou in Harrisonburg are his wife Fadimata and two young sons, Hachime and Mohammed. Abou says they have been pleased to discover other Muslim students and families to share their experience of living in a majority Christian culture.