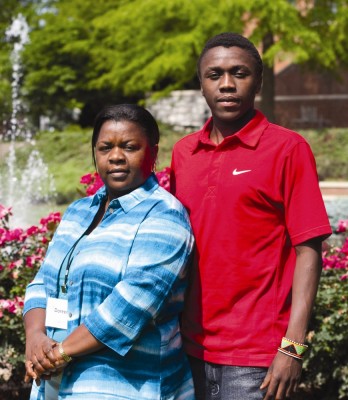 In May 2001, a federal court in New York convicted four suspects of the 1998 bombing of the U.S. Embassy in Nairobi. They were later sentenced to life imprisonment. As a victim who attended the trial, I gave testimony on the victim impact to determine the sentencing of the suspects.

I remember looking at the suspects as I gave my testimony, and how it suddenly occurred to me that, even if the suspects were sent to the execution chamber, it would never bring back the lives of my late husband and the 240 other Kenyans who died in the terrorist attack. What was more important and urgent to me then and now was not the court battles between the prosecution and the defense attorneys, but a more meaningful process, one that would reveal a sense of remorse and accountability on the part of the offenders for the suffering and loss that their acts of violence had cost me, my two sons and the rest of the Kenyans.

To those of us who seek to end violence and injustice in our societies, it is necessary to ask the following questions:

If not, do we need to consider additional forms of creative justice that will heal and reconcile communities alongside the legal system?

I have taken a keen interest in alternative justice systems, those that look at the relationship of parties beyond the courtroom in order to address the needs of both the victims and the offenders and to heal communities. Most have their roots in the indigenous African justice systems. They propose that any form of violence against an individual is a violation of the basic needs of safety and security. Most indigenous forms of justice were wary of retributive justice since it would only serve to further polarize the community and the relationships therein. The systems therefore attempted to restore community harmony first and foremost, rather than hastily punish the offenders.

In a paradigm shift, some of the victims of violent crime, with the help of the court and a trained facilitator, have requested to meet the offender in face-to-face meetings outside the courtroom so that the victims can ask those vital questions that are left unanswered by the legal system, yet are very crucial and personal to their healing process.

The creation of such a “safe space” for both the victims and offenders is not usually provided for by the judicial system. The defense’s focus is on finding the offender not guilty while the prosecution seeks a guilty verdict. The victims are therefore asked questions that further traumatize them.

Victim advocacy groups are now requesting judges and defense lawyers to pay attention to the needs of the victims and find ways that are sensitive to all who are affected by crime or acts of violence. If victims take the lead in the process, they are able to effectively end the cycles of violence by dealing with their own feelings of revenge.

My own experience as a victim of violence taught me that justice and healing do not come easily. Even if the court found the suspects guilty and sentenced them to life imprisonment, I still had to deal with my own feelings of anger and bitterness. It took several years to realize that sometimes all the justice a victim needs is an apology from the offender, an acknowledgement from the rest of the community/society that something wrong and awful happened, and the assurance that such a thing will never happen again.

[This is a revised version of a longer essay that appeared in Wajibu (Vol. 24, No. 4, 2009), a quarterly journal “of social and ethical concern,” published by Gerald J. Wanjohi in Nairobi, Kenya. It is reprinted by permission of the author and publisher. When she wrote this essay, Doreen Ruto, MA ’06, worked for the USAID Office of Transitional Initiatives in Nairobi as a monitoring and evaluation officer. She now teaches at Daystar University, using a peace curriculum that she developed with fellow teacher Emmanuel Sayiorry, MA ’07.]

1 comment on ““I needed a healing form of justice.””