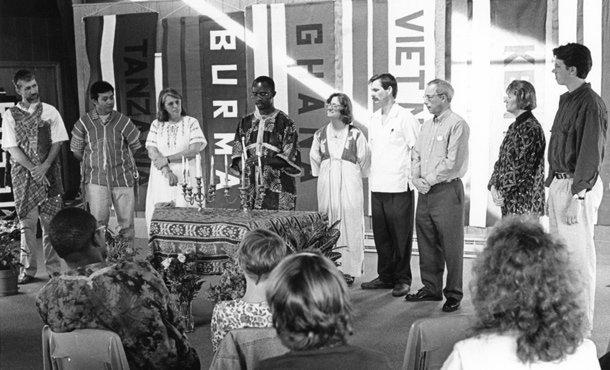 The post-EMU paths followed by CJP’s 36 earliest graduates are as diverse as the 10 countries in which they are currently living.  Yet several themes tended to recur in the interviews, regardless of the nationality, gender, or vocation of the speaker.

Theme No. 1: Peacebuilding begins with oneself and one’s close personal relationships.

Twenty-one of the 36 graduates (58%) specifically mentioned personal sacrifices or career changes they had made to enable their children to be raised in a healthy home environment with attentive caregiving. Four of the alumni are in couples where the husband is devoting, or did devote, years to being the full-time parent. Three of the female alumni are full-time parents now, and two couples are job-sharing or otherwise evenly splitting child-rearing responsibilities. One at-home parent explained, “I want my children to be part of the solution, not part of the problem, when they grow up.”

Theme No. 2: Peacebuilding needs to be extended beyond self, home and immediate community into the transformation of entire systems that perpetuate widespread injustices and thus foment violent conflict.

“In becoming a parent I have become increasingly aware of the world that we are leaving to future generations,” wrote Jeff Heie in an e-mail to the editor of Peacebuilder. “Our current economic system assigns very little value to prevention and the ‘common good’… I have come to view many forms of conflict as rooted in issues of lifestyle. When Western cultures demand a certain level of comfort and wealth, they sow the seeds of conflict.”

Theme No. 3: Wrestling with transforming systems and structures in the absence of clarity on what would be better and how to get there.

In February 2009, at the Global Baptist Peace Conference in Rome, Aküm Longchari of Nagaland (in northeast India) asked those present, representing 59 countries, to consider how they use nonviolent campaigns around the world: Are they merely addressing the outcomes of a violent society, but not addressing the structures that create it?

In a 1999 paper written with fellow alumnus Babu Ayindo of Kenya, Longchari elaborated:

In almost every part of the world, greed and insecurity have led to astronomic consumerism and domination. What we have now is a culture of lies and death primarily guided by fear and profit. Humanity has turned anti-life. We are now evolving a culture that does not have humans and life at its center… Things will get better when more third and fourth world and indigenous people overcome the [Western] definitions of culture that suffocate their capacity to transform their world according to their needs, as their ancestors did.

Build Relationships, But Then?

Upon graduating from CJP (called “CTP” in their era), most of the 36 alumni felt they had been well prepared to develop the interpersonal relationships necessary for reaching out to parties in conflict and bringing them into dialogue with each other. They felt they had learned to listen respectfully, regardless of the nature of the speaker, and to converse in a diplomatic, culturally sensitive manner. They also had learned to be aware of the array of factors that play into a conflict, including who are the stakeholders and what might be their motivations.

In other words, these alumni often spoke of emerging from CTP with a new lens through which to view themselves and the world, of being sensitized to how others view life. They also emerged with analytical tools to help them know “where to start” in their efforts to sow seeds of peace.

Nobody interviewed expressed regret at gaining these insights and skills. Almost all spoke of the ways they had benefited from learning them.

Nevertheless, about a third of the interviewees expressed a desire, as Ayindo and Longchari voiced in their paper, “to search for new paradigms of governance and systems… with the inherent capacity to meet the aspirations of peoples.”

CTP did not contribute to this search, at least not in their era of study. “The one area that I wish would have been stronger at CTP was a critical analysis of how economic systems and relationships perpetuate conflict,” said Jeff Heie. “The military-industrial complex is an example that we all know about. An economy that relies so heavily on the economic activity generated by arms sales and military spending has a vested interest in keeping violent conflict alive.” Heie and other alumni expressed frustration at addressing the effects or symptoms of cycles of destruction, rather than breaking the cycles.

On the local level, for instance, Jim Bernat has worked for a community services board in a semi-rural area of Virginia long enough to notice that some of the clients coming into his treatment system are the sons and daughters of clients treated for mental health or substance abuse problems many years ago. “Our system is clearly broken, when the kids arrive at our doors as harmed as their parents were,” said Bernat.

“I used to think that if your arguments are good enough, people will listen to you,” Dunsmore said. “Often that isn’t true, especially when there are very powerful interests at play.” Back in her day at CTP, Dunsmore added, “We talked very little in class about power dynamics.”

Upon returning to West Africa after graduating, Sam Gbaydee Doe kept seeing something that he did not know how to stop, even with his rapidly growing network of peace organizations: certain African power-players went about winning a place in the post-conflict power structure by intentionally doing horrific things. Doe observed: “One of the best ways to get recognition, to get a seat at the negotiation table, is to cut off the limbs of babies and children.”

Eventually Doe developed a hunger to move beyond scenarios of dealing with sickly violent characters to figuring out “how we can make the state work for ordinary people.” In 2005, he entered a doctoral program in Britain to study the history and mechanisms of statebuilding, intending to apply his findings to Africa.

No interviewee suggested that demonstrating in the streets, in the manner of the French Revolution or even of Mahatma Gandhi, was an effective way of transforming the “system.”

“We can’t just protest,” said Dunsmore. “We must come up with proposals for things that will work in the real world. We need to understand the deep, complex phenomenon underlying our global problems.”

From her professor’s perch in Ohio, Laura Brenneman agreed: “Oppression is definitely structuralized, but [in the US] folks are mostly comfortable and don’t want that pointed out.”

Yet even those folks who aren’t complacent, who are willing to acknowledge “structuralized oppression,” are handicapped by their lack of a socio-economic “paradigm” to work towards. As
Dunsmore puts it, “We’re flying blind. We can’t see around the corner.”

The Impact of Money

A final consideration in this discussion is money. None of the 36 alumni featured in this Peacebuilder have deep wells of money at their disposal. Many depend on grant-based funding that provides for short-term interventions or other types of work focused on specific problems.

A major source of grant money for CJP in its formative years was the Hewlett Foundation, according to CJP’s leaders in the 1990s. After a decade, however, Hewlett shifted its priorities to environmental and development issues, withdrawing funding from CJP and other peace organizations it had been supporting.

In hindsight, Hewlett does deserve recognition for hanging with CJP for 10 years – many foundations shift their funding priorities much more quickly than that. Ironically, however, Hewlett shifted its funding just as CJP had started to develop a track record, as exemplified by the work of our first 36 graduates.

One can dream of the long-term impact Hewlett might have engendered if it had maintained its support, perhaps providing CJP with the resources to explore the structural issues troubling so many of our alumni today.

As matters now stand, many of our graduates spend considerable time writing grant applications for short-term funding. If successful, they subsequently must prepare detailed reports to meet the typically rigid requirements of their funders. Rather than being accountable to the people they are trying to serve, they must tailor their work to the funders’ current interests, which may be “natural resource conflicts” this year, HIV/AIDS next year, and “human security” the year after. Few of our alumni are willing to speak on the record on this matter, because of fear of losing all funding possibilities.

An African dependent on grant money said: “The whole peacebuilding field is becoming monopolized by USAID, which exists to advance the foreign policy of the United States. I have seen funding of a particular project suddenly cut off, not because the work we were doing wasn’t good and effective for the people at the grassroots, but because Washington DC saw no benefit for Americans in what we were doing.”

Another spoke of a $5 million USAID grant supposedly earmarked for peacebuilding work in Africa that was siphoned off by US contractors and other “experts” en route to Africa, resulting in only $175,000 actually being available for work by Africans for Africans.

These views are the stuff of uncomfortable conversations. But they are exchanges that need to be held, according to Jenner, formerly a CJP student and now an administrator. She says more resources need to be put into “longer term, harder work, [including] having hard, disagreeable conversations about problems, confronting power, and building peace that is sustainable.”

How to do this “longer term, harder work” may be CJP’s biggest challenge over the next 10 to 15 years.