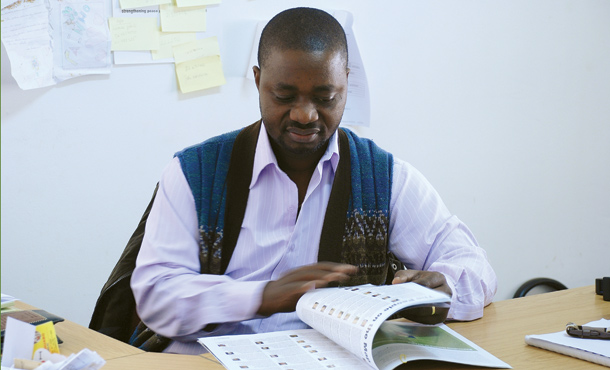 Like many of his fellow students in CTP in the late 1990s, Alfiado Zunguza came from a country ripped apart by war – Mozambique. As a child, he lived for months without electricity or potable water. Motherless from age 6, he moved among relatives’ homes in search of education and security. For survival, he became adept at growing the food he needed – cassava, rice, and sweet potatoes.

In 1996, the 16th year of Mozambique’s civil war, Alfiado met a Mennonite Central Committee volunteer, who was helping a group of Mozambican Christians work toward conflict resolution and reconciliation. Encouraged by the Mennonite volunteer and subsidized by his Methodist church, Alfiado took his first four courses at EMU’s Summer Peacebuilding Institute that same year.

When Alfiado returned to Mozambique after his summer of peace studies, he established a department, JustaPaz (“JustPeace”), within his church to do ongoing peace work.

The next year, 1997, Alfiado’s church offered him the opportunity to be a full-time master’s student in conflict transformation at EMU. It was a difficult decision. He would have to leave behind his wife Carla and their two daughters, one of whom was a newborn. With Carla’s support, he took what they viewed as a “once in a lifetime opportunity.” (Alfiado and Carla now have four children, all daughters.)

From its modest beginnings, JustaPaz has grown to be the most influential peace organization in the Portuguese-speaking world. Headquartered in Maputo, Mozambique, JustaPaz now has its own building, 13 staff members, and an annual operating budget of $400,000. It receives support from German, Swedish, Norwegian, and Canadian organizations, as well as its original parent, the United Methodist Church.

The establishment of JustaPaz was, in part, an outgrowth of efforts by the Methodist bishop of Mozambique to get the two major warring parties – known as FRELIMO and RENAMO – to negotiate their way toward a peace agreement. (An agreement was signed in 1992.)

JustaPaz’s most recent strategic plan notes the following accomplishments over a three-year period: