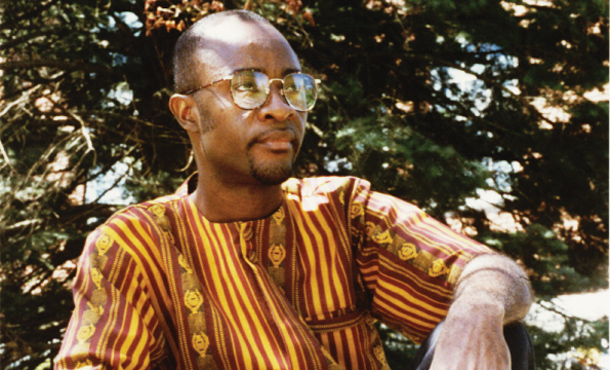 Fourteen years ago, Sam Gbaydee Doe came to CTP from his native land of Liberia, where about 10% of the population had died, or would die, in one of Africa’s bloodiest civil wars, from 1989 to 1996, followed by a shorter war, from 1999 to 2003.

Liberian warlords used child soldiers to commit atrocities – rape and murder people of all ages and genders, including members of the children’s own families. Liberia’s civil war claimed lives from nearly every Liberian family, displaced most from their homes, and reduced the country’s economy to rubble. The strife also spread to Liberia’s neighbors, contributing to the destabilization of all of West Africa.

Sam needed a place to recover personally from the trauma he had experienced, as well as a place to explore ways to prevent such barbarity from occurring again. Encouraged by Barry Hart (a future CJP professor) – whom Sam met while both were doing conflict transformation and trauma awareness workshops in Liberia – and financially assisted by the Mennonite Board of Missions, Sam came to EMU in May of 1996.

In October 1998, at the end of his MA studies, Sam teamed up with a later graduate of CTP, Emmanuel Bombande (MA ’02) to launch the West African Network for Peacebuilding (WANEP). Sam became its first executive director.

“I left EMU fired up to translate a dream into a reality,” Sam said in a September 2010 interview. “I dreamed of a regional movement of civil society that would collaborate with regional intergovernmental bodies to restore not just stability in Africa but democratic freedom and prosperity. I dreamed of establishing an early-warning system throughout civil society that would head off violent conflict. Those dreams became reality in just five years. The profound thing was the speed at which ordinary people mobilized for peace.”

As an example, WANEP provided support to a Liberian social worker Leymah Gbowee, who organized the Women of Liberia Mass Action for Peace. This grassroots women’s organization was instrumental in ending Liberia’s war in 2003 and facilitating the election of Ellen Johnson Sirleaf, the first female president of an African nation. (Leymah is a 2007 MA grad.)

With seed money of $90,000 from the Winston Foundation, WANEP grew in two years from grouping 13 organizational representatives from six countries to 300 member groups from 14 countries. By 2000, WANEP’s annual budget was $1.2 million. By 2004, its budget had doubled. Sam incredulously asks himself: “How did we get from no organization in 1998 to being the largest peacebuilding organization in Africa in 2004, with 22 staff members [at its headquarters in Accra, Ghana] and offices in 14 other countries?” WANEP now runs its own version of SPI, the West African Peacebuilding Institute.

Few people or organizations make headline news for civil wars prevented, numbers of child soldiers quietly rehabilitated and reintegrated into society, or elections held without major violence. Yet WANEP and its partner organizations deserve much credit for their contributions to the growing stability of the majority of the countries in West Africa.

In 2004 Sam began working toward a doctorate in peace studies at the University of Bradford in England. The next year, he went to work for the United Nations as a consultant to its Liberia Mission, followed by a one-year stint with the UN Development Programme Pacific Regional Office in Fiji.

Since 2007 Sam has worked for the UN in Sri Lanka. He completed his doctorate in the spring of 2010. “After my intense work in West Africa, I felt I needed another opportunity to retreat, reflect, and reengage,” he explains.

His doctorate dissertation was on “indigenizing post-war state reconstruction,” a topic that links building peace to building a stable, democratic state. As an advisor and analyst in a country emerging from 30 years of civil war, Sam oversees trainings on conflict-sensitive development, dialogue and reconciliation, and other topics in Sri Lanka. Sam is the 2002 recipient of EMU’s annual Distinguished Service Award.