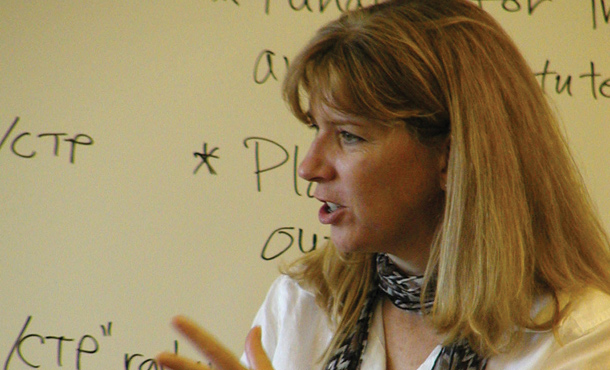 Krista Rigalo arrived at EMU in the fall of 1998 with considerable international experience. She already held a master’s degree in agricultural education and had focused on agriculture in the Philippines as a Peace Corps volunteer there in the late 1980s and early 1990s.

In the mid-1990s, as a Mennonite Central Committee (MCC) volunteer, she shifted her attention to the ravages of war while co-directing MCC’s program for Rwandan refugees in the eastern Congo.

As an MA student in conflict transformation from 1998 to 2000, Krista spent a semester at the Carter Center in Atlanta, where she focused on how conflict between Uganda and Sudan might be eased.

Upon graduation from EMU in 2000, she returned to Africa on behalf of MCC to work at the Africa Peacebuilding Institute at the Mindolo Ecumenical Center in Zambia, where she taught courses in trauma healing and in peacebuilding. She also worked for MCC in Angola.

She returned to the United States in 2003 and entered the doctoral program in conflict analysis and resolution at George Mason University, always maintaining her focus on Africa.

In her current Peace Corps role as acting chief of programming and training for Africa, Krista spends considerable time coordinating with other offices to ensure that the Corps’ 27 country programs in Africa receive the desired number of volunteers, with the requisite skills. Krista often arranges special trainings to see that people in the Corps are well-suited to their work assignments. She is in charge of overseeing the training of both the volunteers and the staff involved with Africa.

“My MA from EMU has been extremely beneficial in terms of my ability to help the Peace Corps identify needs and design training materials,” Krista says. “The CJP degree is a practitioner’s degree in the sense that the practice component is really highlighted and developed. When I was there, many of the courses were taught almost as trainings, which makes it that much easier for me to adapt CJP’s content for trainings conducted for the Peace Corps.

“I still go through my notebooks from my classes and pull out relevant material that can be used as a starting point for materials for Peace Corps volunteers.”

She notes that Peace Corps volunteers in Africa work largely in education, but some also work in improving health, developing small enterprises and non-profit organizations, supporting agriculture, and protecting the environment.

“Our average volunteer is 24 to 26 years old, with very limited experience dealing with atrocities and protracted conflict,” says Krista. Yet some of these young adults are placed in Liberia, Sierra Leone, Rwanda, northern Uganda, and Kenya, all of which have undergone bloody conflicts in the recent past. “They are definitely facing the realities of what it means to try to do development work in a post-conflict community.”

With support from her leadership, Krista has been able to start what she calls a “post-conflict initiative” in which she is developing new materials appropriate for preparing volunteers to work in regions emerging from war. The materials will cover “psychosocial work” and “conflict-sensitive development.”

In the summer of 2010, Krista sent a Peace Corps program manager from Uganda to EMU to take STAR (Strategies for Trauma Awareness and Resilience). With her new skills, Krista says, the manager “will be used by the agency as an on-continent resource to other country programs.”