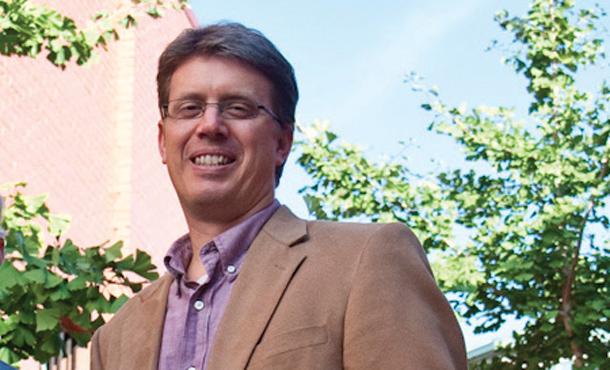 Given the worldwide reputation of EMU’s Center for Justice and Peacebuilding, one might reasonably ask, “But what impact have its graduates had in EMU’s home community?”

An observer might cite the work of CJP-linked people in churches, health-care centers, school systems, a transitional program for recently released prisoners, and a center that helps immigrants and refugees. But at or near the top of the list of “most impact in the community” would have to be the Fairfield Center, founded 28 years ago by a dozen visionaries, almost all of them EMU faculty members or alumni.

The Fairfield Center was launched in 1982 under the name Community Mediation Center, the first such center in Virginia. The center was renamed “Fairfield” in 2010 to enhance its marketability and to recognize one of its founders, Kathryn Fairfield ’70, an attorney who has been a steadfast mediator, trainer and advocate over the years.

In the center’s early years, Tim Ruebke was an undergraduate majoring in social work at EMU. For his social work practicum, he went to the mediation center in the fall of 1992. Two months later he was employed as a case manager and mediator. He spent the next 15 years handling 1,500 cases involving issues as “minor” as marital conflict and as major as criminal cases and complex organizational or multi-party issues. He is a state-certified mediator for civil and family circuit court cases and has taught alternative dispute resolution in community workshops and college classes.

Since 2007 Tim has been the executive director of the Fairfield Center, a role which requires him to spend more time “managing the business” – producing grant applications and reports, supervising personnel, working with his board – than actually mediating or facilitating, as he did in his earlier years.

Tim has four part-time staff members and eight volunteers to handle an average of 45 cases per month. Their efforts are enhanced by those of almost 30 trained community mediators. Collectively, these workers offer an array of “conflict resolution, communications excellence training, business services, restorative justice and civic engagement initiatives,” according to www.fairfieldcenter.org.   In short, they can address “any circumstance requiring dialogue or decision-making between two or more people.”

Harrisonburg and surrounding Rockingham County abound with examples of the influence of the Fairfield Center:

Harrisonburg isn’t perfect, but its inevitable problems tend to be addressed in a responsible and calm manner. Part, maybe even much, of the credit for this situation of relative social harmony lies with the work of the Fairfield Center and its long-time staffer and current leader, Timothy Ruebke.