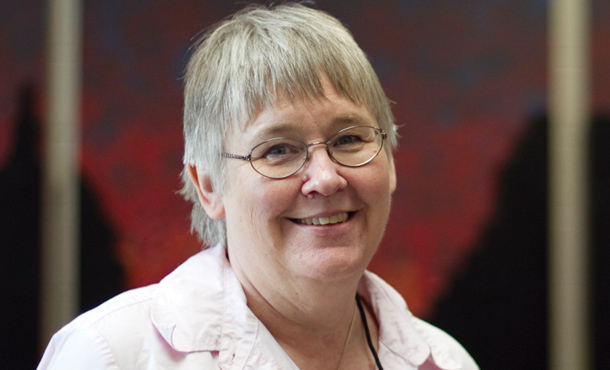 Jan Jenner is outranked only by Howard Zehr for being the longest-serving full-time employee currently at CJP. Over the last 13 years, she has been a student, grant writer, administrator, book author, and teacher at CJP.

She and her husband Hadley formerly served with Mennonite Central Committee in Kenya.

Books she co-authored – When You are the Peacebuilder: Stories and Reflections on Peacebuilding from Africa (2001) and A Handbook of International Peacebuilding: Into the Eye of the Storm (2002) – continue to be widely referenced. Most issues of Peacebuilder, for instance, cite at least one of these books.

“CJP is certainly more rigorous than it was when I was a student,” Jan says. “It is larger, more structured.” She notes that the CTP graduate program began in the 1990s with professors drawn from other fields, such as sociology, religion, social work and history (of crime). By 2001, however, CJP had three professors with PhDs in the field: professors Lisa Schirch, Barry Hart and Jayne Docherty had all earned their doctorates at George Mason University’s Institute of Conflict Analysis and Resolution.

CJP’s evolution reflected a trend, says Jan: “The field has professionalized over time. It depends more on bureaucracies than individual people. It is less led by Westerners. People know a lot more about what they are doing and why. We have moved from working on an anecdotal basis to evidence-based work.”

She expresses concern, though, that the field may become “too professional.” She doesn’t want people to think “they can’t do anything unless they have the right [academic] degrees. I don’t think we should be dis-empowering ‘Joe on the street’ from working for peace.”

She is also concerned by the disconnection she sees between “the short-term orientation of most of the funding and the long-term commitment necessary to stabilize communities.”

Jan is the behind-the-scenes administrator responsible for launching STAR (Strategies for Trauma Awareness and Resilience) after the events of 9/11 and for the founding of Coming to the Table, an initiative to deal with the legacy of slavery in the United States.