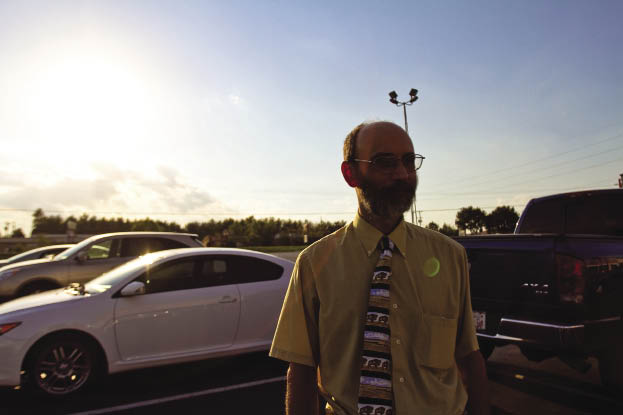 Who would come from half-way around the world to enroll in a program at Eastern Mennonite University that was so new, no college catalog listed it? Sam Gbaydee Doe did. From Liberia.

Initially, the plump squirrels running around campus dismayed him: They could be food for very hungry people in his war-torn homeland. He himself would have welcomed eating a scrap from a squirrel not long before.

Today [November 2010] Doe is a “development and reconciliation advisor” with the United Nations Development Programme in Sri Lanka, thanks in part to his master’s degree in conflict transformation from EMU.

Herein we explore the lives and reflections of the first group of students to complete EMU’s Conflict Transformation Program (CTP), now called graduate studies in conflict transformation under the Center for Justice and Peacebuilding (CJP). In this series of articles, the acronyms “CTP” and “CJP” will appear somewhat interchangeably, depending on the interviewee and the years referenced.

CJP’s first non-credit students, 40 of them, enrolled in the 1994 Frontiers of International Peacebuilding, the earliest version of the Summer Peacebuilding Institute.

The first for-credit students were two US-born Mennonites: Jonathan Bartsch, raised in Pennsylvania, and Jim Hershberger, raised in Kansas. In the fall of 1994, both men began graduate classes, hoping that their MA in conflict transformation program would be accredited by the time they finished. (The program became accredited in the fall of 1996; the men graduated the following spring.) The first courses taken by Bartsch and Hershberger were done mainly as a combination of independent study and one-on-one sessions with the founding director of CJP, John Paul Lederach, and sociologist Vernon Jantzi, author of CJP’s first curriculum.

CJP’s first MA students came with extensive experience beyond the United States. Bartsch had studied at the University of Cairo and Birzeit University near Ramallah in Palestine and could speak Arabic. Hershberger had lived for eight years in Nicaragua as a Mennonite Central Committee volunteer and could speak Spanish.

In January of 1995, they were joined by [student whose name has been redacted for security purposes.]

Ron Kraybill, who helped shape the new program while finishing his PhD in religion in South Africa, also came aboard that January as CJP’s first professor hired exclusively for the program. Hizkias Assefa, an internationally renowned mediator based in Kenya, taught each summer from the beginning.

By the summer and fall of 1995, word had spread, mostly via circles frequented by Lederach, Jantzi and Kraybill. The program grew exponentially, enabling EMU to hire Howard Zehr to teach restorative justice in 1996, soon followed by the hiring of two more faculty members, Lisa Schirch and Nancy Good.

Bartsch, Hershberger, and the third student were joined in the fall of 1995 by 12 more students, including four women. By the fall of 2000, six years after CJP first opened its doors, 37 people had earned master’s degrees or graduate certificates and more than 900 had attended its Summer Peacebuilding Institute.

CJP’s first several dozen graduate students now have had 10 to 13 years to gauge the impact of their studies on their lives and work. For the fall/winter 2010-11, Peacebuilder staff sought to contact each of the 37 to collect their reflections. We succeeded in locating 36 of them, 21 men and 15 women.

Without exception, the 36 felt positive about what they “got” from CJP. Many spoke about how their studies influenced their interpersonal relationships, including those within their immediate family. Those who came directly from conflict-ridden situations also spoke about the need for respite, for recharging their inner batteries.

Gilberto Peréz Jr., who completed a graduate certificate in 1999, recalls the ever-present physical violence in south Texas, where he grew up. Even in his family, it was no surprise when he hit his sister. Today, he and his wife Denise, a 1992 EMU alumna who majored in Spanish and elementary education, “work hard at having a non-violent household.” They use such techniques as paraphrasing what someone has said and reframing things.

Says Pérez: “My [12-year-old] daughter will stand there and tell her [younger] brother, ‘I’m mad at you.’ That’s not what I would have done when I was her age – I would have belted him.”

Babu Ayindo, MA ’98, says when he was growing up in the slums of Nairobi, Kenya, he experienced violence every day of his life. He feels he carries the potential for violence within him, as he thinks most of us do. He and his wife Miriam have taught their children that reacting violently is a short-term act with long-term repercussions. Babu explains:

Momentarily it gives you a good feeling. You’re annoyed, so you kick a chair, or you punch the wall or punch someone. You project on someone else, someone you can easily blame. But if you take your time and reflect on it then you realize that it’s not the best way out. It’s an easy way out, it feels good, but you also live with the trauma you are inflicting on others. You also become a traumatized person.

Sandra Dunsmore began courses at EMU while living in El Salvador, where her early Quaker-sponsored peace work involved (in part) listening to people linked to death squads. “I needed some space to think through what I had been involved in, to reflect in a guided way. I hadn’t done a particularly good job of taking care of myself. I couldn’t continue as I had been living.”

On the professional level, 33 of the 36 respondents (92%) mentioned specific ways they have carried their CJP studies into their work as non-profit administrators, mediators, trainers, social service workers, teachers, and other roles.

Jim Bernat, who studied at CJP while working as a mental health specialist in a region 90 minutes from Harrisonburg, says his graduate education helped him “refocus his being, thinking and practice around the principles of justice and nonviolence.”

Bernat is in his 25th year of working for the same government-supported community services board as he did in his CJP days, though he is now an administrator. From his CJP-influenced perspective, Bernat sees justice as “not just what one sees in a court of law, but as an everyday matter: How do we treat our employees here? Do our clients feel valued, and our staff too? How am I contributing to our sense of community?”

In fact, the most enduring trait acquired at CJP, said a majority of the respondents, is viewing the world through distinctive lens. This has proved to be personally transformative.

Daagya Dick, MA ’00, who fostered a network of peacebuilders in Central America from 2000 to 2003, said CJP taught her about shifting “from destructive dynamics to positive dynamics.” She said she gained an “understanding of how people work and what human needs are and how to respond to those needs in a way that people can be positively engaged.” She liked the way the program encouraged “balance and wholeness in life in order to be an effective peacemaker.”

Dick, who now teaches Spanish in a public high school in Kansas, added: “You can call on these skills anywhere you work.”

Christine Poulson, MA ’98, used similar words: “What I learned at CTP would be useful to anybody doing anything. It gave me a better

understanding of the world and of myself. I became a more reflective person. I am better at prioritizing what is really important to me.”

That first group of 21 men and 15 women brought rich experience to CTP. They were diverse in almost every respect – age, nationality, ethnicity, and motivation for coming to the then-new program. They were not diverse in religion, however. Most of them were Mennonite-style Christians – eight arrived directly from service with Mennonite Central Committee – though there were also Catholics and mainstream Protestants. One student was exploring Native American religions. But there were no practicing Muslims, Buddhists, Hindus, or Jews. These arrived in later years.

About 60% of these graduate students had survived civil wars or other society-wide violence.

Sam Gbaydee Doe of Liberia, one of the 12 students entering CJP in its second year, told this story in When You Are the Peacebuilder, a spiral-bound book published by CJP in 2001:

In December of 1989, I was only two semesters away from achieving my dream [to finish a degree in economics and accounting and become a banker] when the Liberian civil war began. By May of 1990, the rebels had captured every part of the country except the executive mansion where the president was hiding.

By July, 1990, we had gone without food for nearly three months and were hiding under beds and between concrete corners most of the day. One day there was a temporary cease-fire and I decided to take a walk, just to flex my muscles. While walking around this slum community, I came across a young boy, lying under the eaves of a public school. I remember his face like it was yesterday. He was just skin and bones.

I stood over him for quite a while. His mouth was open. Flies were feeding on his saliva. In a surreal moment, I raced to a nearby community to find something edible. I found some popcorn being sold for fifty cents. I bought some and dashed back to this child. I stooped over him, slipped a few pieces of the popcorn into his mouth, and waited anxiously to see him chew the popcorn and regain his strength. ‘Chew your popcorn, you innocent child,’ I said to myself, ‘God has answered your prayer.’

About ten minutes passed by but his little mouth remained frozen. It must have been half an hour later when, with a last rush of energy, he opened his eyes wide and looked at me. Our eyes locked. He shook his head, and closed his eyes. After several minutes, his movements slowed and eventually stopped. The child had given up the ghost. I began to cry profusely. I asked myself, “How many children like you are dying right now throughout this country? How many have been swallowed in the madness of adults?’

I made a pledge to that boy: I would work for peace so that children could live… I have never turned my back on the promise I made to that nameless and faceless child.

From one success to another

Doe went on to earn his master’s and doctoral degrees in the field of peace, co-found what is now the largest peace organization in Africa (WANEP), join the staff of the United Nations, and spend several years in Sri Lanka, helping that country emerge from 30 years of civil war. In the long term, he sees himself working in Africa once again.

Editor and writer of Peacebuilder