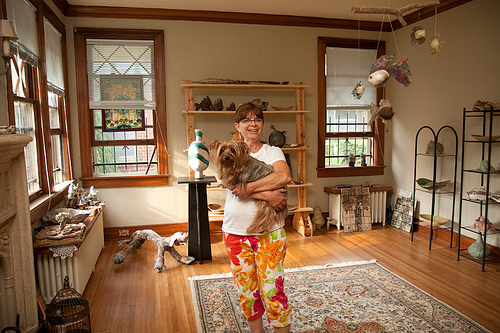 In the spirit of Raku, the artist makes no demands, expects nothing, follows no absolute plan, is secure in change, learns to accept another solution and, finally, prefers to gamble on her intuition.
–Jean Handley, Raku artist & sculptress

Jean Handley carries in her head and heart the nine training sessions she has attended at EMU’s Center for Justice and Peacebuilding (CJP) since 1998. Jean likely holds the record for repeated attendance at CJP, though never as a degree-seeking student. Yet she brings as much to CJP as she derives from it – she has lived a truly astonishing life.
Jean was raised Jean Botnik in an ethnically Jewish family in Birmingham, Alabama, during the era when African Americans in her city were meeting, marching, and being killed for civil rights. In the same small city lived Fania E. Davis, a close friend of two of the three African American girls who were killed when the Ku Klux Klan bombed their church in 1963.

When that bomb hit, Jean was age 17. A week later another bomb exploded – this time in her synagogue. Nobody died in that one, but Jean’s community too feared the Ku Klux Klan.

Jean moved to Cincinnati right after high school, fleeing an unhappy home. In Cincinnati, she taught herself computer programming and made a living at it. She also survived rape at knife point.

Like many young people in the 1960s, Jean turned on and dropped out. She headed to California to study art for a year, liberally dosing herself with weed and hallucinogens. In 1969, she went South, surfed in Mexico, taught English in Colombia (and was raped again, this time by four gun-wielding men), backpacked through South America, and finally settled after a few years with a boyfriend of Peruvian peasant stock, Manuel.

Jean and Manuel lived on an island three hours up the Amazon River from the nearest settlement, itself just a handful of huts. They had two tangible assets – a chain saw and a 100-meter dragnet for catching catfish. They raised pigs and chickens, trading them for gasoline, kerosene, matches and salt.

A year after settling on the island, Jean almost died giving birth. After four days in labor and four or five hours trying to flag down the occasional passing boat, Jean departed alone (Manuel had to stay behind to tend the animals) to a generator-powered medical clinic in Pucallpa, Peru, where the road from Lima ended and river travel began. There her son, Magus, was born by C-section. Jean and the baby returned to what she now wryly calls “living sustainably” on the island.

When Magus was three years old, Jean developed appendicitis. She endured another hours-long boat trip to Pucallpa, where the local doctor didn’t know what to do with the dying woman. A young surgeon from Texas, “Jimmy,” happened to be trekking through Pucallpa. With the help of Jimmy and some missionaries, Jean got airlifted to Lima. Jean underwent two surgeries in an American hospital, with Jimmy assisting (he had been trained by renowned open-heart surgeon Dr. Michael DeBakey).

Upon recovering, Jean parted ways with Manuel and returned to the United States with Magus. Here she taught English as a second language near the Mexican border.

In 1983, Jean emigrated to Israel – “I was looking for roots – a cross between a culture and a spiritual identity.” There she met Dennis Handley, the man who became her beloved husband and who adopted Magus. (She lost Dennis to cancer in 1993.) Jean developed her art and designed silk fashions for a bridal shop. She also worked with Jewish-Ethiopian refuges for eight years and found spiritual kinship with them.

Along the way, Jean met two Mennonite families – one living in Tel Aviv (Paul and Bertha Swarr) and one in Haifa – and “I really liked them.” Eager to better understand what it means to “do justice,” Jean found EMU’s Summer Peacebuilding Institute (SPI) on the internet, appreciated its link to Mennonites, and enrolled in her first SPI class in 1998.

In 1999, she and Magus returned to the United States to be closer to her father, who had developed Alzheimer’s. In 2000, Jean bought a house near the levies and Lake Pontchartrain in New Orleans, continued to produce and sell art, and started Turning Point Partners to introduce CJP’s conflict transformation principles to New Orleans’ hurting communities.

Hurricane Katrina hit in the summer of 2005, leaving Jean’s home – and her art studio equipped with two expensive pottery kilns – under 12 feet of water. Jean was homeless. She took refuge in Memphis, where her sister is a psychologist. By the fall of 2005, Jean was leading a 10-member team affiliated with Turning Points Partners in New Orleans to EMU for a special session of STAR (Strategies for Trauma Awareness and Resilience).

Until early 2007, Jean agonized over whether to rebuild her life in New Orleans or to stay in Memphis. With colleague Lou Furman stepping forward to lead Turning Point Partners in New Orleans, Jean gradually shifted her attention to Memphis, while protesting to God, “I can’t do this again. I’m 60. I can’t start over again.” But then she read a quote by Goethe to the effect that unless a person is committed, nothing happens; but once committed, the doors open. So Jean decided to mentally commit herself to the Memphis community.

She immediately received an invitation to do a restorative justice presentation to the Tennessee Department of Children’s Services at the state level. That cemented her decision – she would re-engage. The doors have kept opening, though she hasn’t hesitated to do her part in knocking on them.

These days, Jean divides her time between Turning Point Partners in Memphis – which is all-volunteer as Peacebuilder goes to press, with about six people involved – and her art work, which is sold in a strip-mall gallery. “The two keep me balanced,” she says. Besides, one of the lessons she assimilated in that 2005 STAR session at EMU was that being resilient requires taking care of oneself.