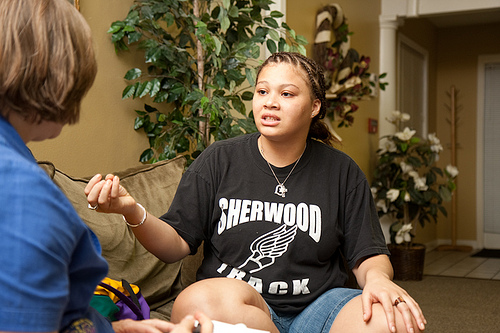 Getting to know the neighbors took on a new dimension recently at a gathering of residents at a Southeast Memphis apartment complex. Summoned as part of a neighborhood watch program, they were asked to form a circle and pass a “talking stick.” They were told to speak only about themselves, and only the one who held the stick could speak.

The event was a “peacemaking circle,” being used in neighborhood settings, churches and elsewhere in Memphis to resolve misunderstandings and create bonds of empathy, said Jean Handley, founder of Turning Point Partners, a nonprofit agency. Turning Point teaches communication, community-building and conflict resolution under the larger concept of restorative justice.

The circle was held at Autumn Ridge Apartments in Hickory Hill, which is one of several areas of the city Memphis Police Director Larry Godwin said last month include hot spots of crime.

Little was said until the stick was passed to Bonita Brice, 47, who had brought her two young grandchildren. Brice said her mother died when she was 4; she was passed among relatives and endured mistreatment (including once being made to drink a bottle of turpentine, she explained later). She had lost three sisters to heart disease and had had open-heart surgery herself. Pressing one child to her breast, she said she had never been out to meet anyone there. “I don’t have nobody to talk to where I can say just what I feel.”

Brice’s story quickly spurred others. A woman said her father was murdered; another, like Brice, lost her mother as a small child and felt like an outcast in  her family; a truck driver fought pneumonia alone in a hospital for months, lost his apartment and lived out of his truck for a year.

Before the evening ended, one woman in the circle gave Brice her phone number and Brice, in turn, gave the woman who felt unwanted a hug.

[Reported by Barbara Bradley and  excerpted with permission from the Memphis Commercial Appeal (09/10/09). As an epilogue, circles continued at this complex through September and early October 2009, with residents starting to “own” the process. They chose Brice to be their circle leader for October 6, 2009.]