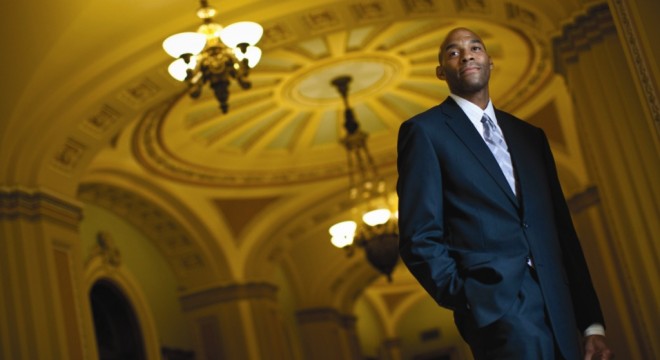 “Many people in peacebuilding are naïve or unaware of how to engage policymakers. They are clueless about the kind of impact they can have. They are intimidated by the idea of meeting with a member of Congress,” says Eric Ham.

Ham is changing that.

As policy director for EMU’s 3D Security Initiative, Ham spends most of his week organizing and leading delegations of concerned individuals, often straight from their grassroots organizations around the world, to Congress. He thinks the elected representatives of the United States need to hear fresh insights into policy matters, based on real-life experiences, often supplemented by extensive study. And he seems to be right, judging by the growing numbers of Congressional offices opening their doors to Ham, as well as to the woman he reports to, 3D Security Director Lisa Schirch.

Since Labor Day (9/07/09), Ham has taken three delegations to the Hill, focusing sequentially on Burma, global health issues, and Pakistan. On Oct. 2, 2009, Ham’s Congressional visitors – Azhar Hussain of the International Center for Religion and Diplomacy and Rebecca Winthrop of the Brookings Institution – advocated more support for the establishment of an educational infrastructure in Pakistan to fill the space now occupied by militant religious groups, who are cultivating violent extremism in the schools they run.

This type of aid – for educational rather than military purposes – typifies the core argument of the 3D Security Initiative that the United States needs to have a more even-handed approach to the three “Ds” of foreign policy – development, diplomacy and defense – instead of relying mainly on the “hard-power” approach of funding military might.

Hired by Schirch in April 2008, Ham heads up the Washington office of 3D Security Initiative. When Washington policymakers were debating whether to send more troops to Afghanistan in the summer of 2008, the Inititative took Afghan and Pakistani students and alumni from EMU’s Center for Justice and Peacebuilding (CJP) to speak to Congressional staffers about the need to shift funding toward civil society organizations in their countries. These visitors offered a preview of the findings Schirch reported in an article distributed by Common Ground News Service on Feb. 3, 2009.

Citing a survey of nearly three dozen civil society leaders from Afghanistan and Pakistan, Schirch found that they “want a shift in military strategy. They warn a troop surge alone will result in more civilian casualties, more village raids, further alienation of the local population and growing local resistance to foreign troops. The leaders also fear that the Taliban could use a troop surge as an opportunity to recruit local people to their cause.”

Those surveyed also criticized the funding of “highly paid experts who know little of local culture and design projects with minimal long-term impact.” Instead they recommended “direct support for Afghan organizations that understand local languages, cultures and religious dynamics. There are many Afghans doing frontline work in economic development, human rights, good governance and independent media. Yet they receive little recognition or financial support for their work.”

Eight months after Schirch made her report, validated by CJP students and alumni from that area of the world, her warnings seemed prescient. With matters going from bad to worse in Afghanistan as of October 2009, certain military leaders sought a massive increase in U.S. troops there, while key elected representatives questioned the wisdom of that course of action.

“We’re trying to alter the foreign policy landscape,” says Ham. Though the 3D Security Initiative is only four years old, Ham sees signs that it is succeeding, little by little. For one thing, the language used in Congress is shifting, with more references to “building civilian capacity” and funding “conflict-prevention” efforts. For another, an amendment offered by Senators Richard Lugar (R-Ind.) and John Kerry (D-Mass.) was passed restoring $3 billion for development to the foreign aid budget, as advocated by 3D Security.

For Ham, working in a David-sized organization to address a Goliath-sized U.S government is exciting and downright inspiring. He’s been on the other side of the meeting table as a Congressional staffer himself in the office of U.S. Senator Bill Nelson (D-Fla.). One of his best memories from that period is finding himself next to then U.S. Senator Barack Obama at a Foreign Relations Committee hearing on Obama’s first day in the Senate in January 2005. To Ham’s delight, Obama recognized Ham, who (as a graduate student in public policy) had audited then-professor Obama’s constitutional law class at the University of Chicago in 2002. “He was absolutely phenomenal as a teacher, earth shattering,” recalls Ham. “He was funny, engaging, articulate, brilliant.”

Ham, who is a native of Detroit, previously worked for two much larger non-profits: the American Civil Liberties Union and the Center for Strategic and International Studies. When Schirch sat down with him to talk about the mission, vision and goals of the 3D Security Initiative, Ham was surprised at how closely it meshed with his own hopes for his country, especially since he had never heard of the philosophy or programs of Eastern Mennonite University, where Schirch teaches graduate students.

“EMU is one of this country’s best-kept secrets,” Ham said after attending the 2009 session of EMU’s Summer Peacebuilding Institute. “I thoroughly enjoyed the experience of being there. You’ve got this small, religious, Christian university neatly tucked away in the Shenandoah Valley, and it brings in people from all over the world and many religions and puts them in classrooms together. It was like being at the United Nations.

“You’re talking to a doctor from Afghanistan and he is talking about how the U.S.-led war has ravaged his country and then you talk to a deputy mayor from Jerusalem… It was a phenomenal experience.

“I kept thinking, ‘Washington policy makers just need to come here.’ It would help them to see all the problems they face through new lens.”

Note: In 2011, the 3D Security Initiative became 3P Human Security. For more information on 3P, visit www.3phumansecurity.org. At time of publication, the Initiative is supported by the Ploughshares Fund, the Compton Foundation, the Colombe Foundation, the Ford Foundation, and private donors.