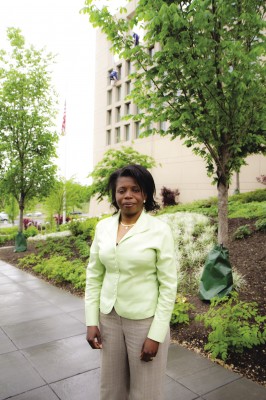 In February 2009, Irene Safi Turner, MA ’08, was invited to speak at an event organized by a coalition of groups that was urging the U.S. Congress to pass the International Violence Against Women Act (IVAWA).

Turner was a featured speaker because she had spent years addressing the widespread violence (often rape) inflicted on women in her native country of the Democratic Republic of the Congo. Turner came to EMU after years of working for the United Nations Development Programme and for CARE International on women’s issues, with a particular focus on the brutal treatment of women in war-ravaged areas of the Congo.

IVAWA had bipartisan backing—including Senator John Kerry, a Democrat, and Senator Richard Lugar, a Republican—but despite the efforts of Turner and other eye-witnesses to the violence against women in many countries of the world, the act did not get passed before Congress adjourned in 2009. The act was re-introduced in 2010, but as of April 2012, it had not been resurrected and passed.

According to Women Thrive Worldwide:

The IVAWA, if passed, would for the first time comprehensively incorporate solutions into all U.S. foreign assistance programs—solutions such as promoting women’s economic opportunity, addressing violence against girls in school, and working to change public attitudes. Among other things, the IVAWA would make ending violence against women a diplomatic priority for the first time in U.S. history. It would require the U.S. government to respond to critical outbreaks of gender-based violence in armed conflict—such as the mass rapes now occurring in the Democratic Republic of Congo and Haiti—in a timely manner. And by investing in local women’s organizations overseas that are successfully working to reduce violence in their communities, the IVAWA would have a huge impact on reducing poverty—empowering millions of women in poor countries to lift themselves, their families, and their communities out of poverty.

Though Turner started her journey to peacebuilding focused on the treatment of women, she is broadening the scope of her interests as a PhD candidate at the School for Conflict Analysis & Resolution of George Mason University. She wants to explore the role of doctorate-holding leaders of society and other intellectuals in contributing to the violence in the Congo, or at least in acquiescing to it.