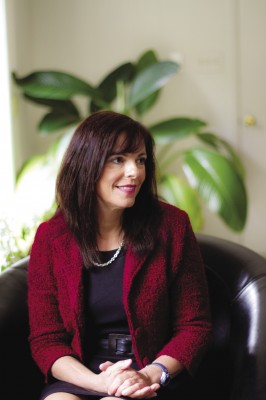 As a fresh graduate from the University of Virginia in 1982, Brenda Waugh headed to California where she worked as a costume designer and studio wardrobe coordinator in Hollywood.

Those early 20-something years seem eons ago.

They were before . . . Waugh finished law school and worked as a Legal Aid attorney, often representing victims of family violence.

Before . . . she was an assistant prosecuting attorney, often representing the state in cases of child abuse and neglect.

Before . . . her son, a former Virginia Tech undergrad, experienced the horror of a fellow student killing 32 people on April 16, 2007, leaving 25 injured before the student-shooter killed himself.

Waugh, who topped off her 1987 Juris Doctor with a master’s degree in conflict transformation from EMU in 2009, is now a supporter of restorative justice. So much so that she designed and co-taught with EMU professor Howard Zehr an online restorative justice course that attracted 14 students from four countries in 2011-12.

She also designed and co-taught a course for senior law students at her alma mater, West Virginia University College of Law, on “practice skills,” including typical interviewing and negotiating, but adding new conflict-resolution skills.

“We included collaboration, listening and mediation skills in this course, which I have come to believe are critical skills in the practice of law,” she told Peacebuilder.

In her private practice, serving three communities (and soon serving Washington D.C.), Waugh focuses on improving the ways and processes of addressing legal conflicts, said Waugh, who is married to lawyer Chris Quasebarth. “I focus my practice on cases suitable for mediation, restorative justice or collaborative law processes.”

Generating interest about the possibilities offered by restorative justice has become her passion. In the spring of 2012, she organized a continuing legal education program in the Eastern Panhandle of West Virginia attended by more than 60 lawyers and two judges. CJP adjunct instructor Lorraine Stutzman Amstutz also presented in this program.

In 2011 Waugh had an article published in the Journal of Law & Policy by Washington University School of Law in which she explored potential restorative approaches to the Virginia Tech tragedy. She has more articles in the works pertaining to daily applications of collaborative law and restorative justice principles for attorneys.

Prosecuting attorney:
I witnessed the destruction of multiple
generations by sexual abuse within one family.
The firestorm engulfing child, mother, cousins, aunts, uncles.

Student of restorative justice:
I gained understanding of a new way to justice (peace)
only to uncover promising processes blindly adhering
to the crumbling pillars of the old ways . . .

Even after all of the rest (the quarter century) I’m surprised.

All in all, a struggle to define harm, name those affected,
identify their role, and satisfy their needs (or their rights).

No stopping the struggle—careful hunting for answers.
Once upon a time I looked only at the facts, statutes, and
precedent—giving way to theories of restorative justice . . .