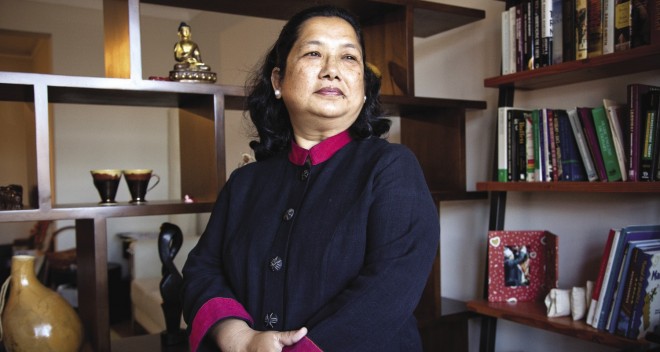 At the end of 1995, years before Anjana Shakya, MA ’02, arrived at CJP as a Fulbright scholar, she gathered representatives of non-governmental women’s groups in Nepal and founded the Beyond Beijing Committee to lobby for women’s rights and inclusion as equal participants.

Earlier, in September 1995, Shakya had the Nepalese women’s delegation to the United Nations’ Fourth World Conference on Women at Beijing. Participation in this conference “started the trend for the first time in the history of Nepal to be inclusive of its multicultural heritage and minorities and rural population,” Shakya told Peacebuilder.

Shakya launched HimRights in 1998, not long after Nepal descended into a war lasting from 1996 to 2006. Her organization continues to monitor, document, mediate, and rescue people suffering from violence. Today the program is focused on reconciliation work, based on peace and compassion rather than revenge and anger.

A major component of the program is a workshop lasting four to six days in which traumatized women and children, in separate sessions, are helped to work through their grief and anger and to move forward. “We find that after four or five days in our program, the participants recognize that revenge or other forms of violence only perpetuates further violence rather than peace, at both the personal and community levels,” said Shakya.

In a June 2011 interview with the alumni magazine of Smith College—where Shakya earned her undergraduate degree and currently serves as a board member of the alumni association—Shakya spoke of the value of art therapy for traumatized children. Their art has been the basis of comic books and art exhibitions that graphically show how these children experienced Nepal’s war.

“A lot of them [the children] had been child soldiers,” Shakya told Smith magazine. “They saw a lot of torture, a lot of killing; they themselves had to go through a lot of torture. They have lost their parents in the conflict. And for women, some of them have been soldiers themselves as Maoist insurgents. Some of them have been tortured and raped. They cannot sleep. They cannot think straight. They still live in fear.”

Yet Shakya has been heartened to see how even highly traumatized women and children have responded positively to the workshops sponsored by HimRights.

“[In most cases], they go through an amazing change. On the first day, they’re really mad and they say something like, ‘I want revenge.’ The anger that comes out is unbelievable. And we would gradually see each day how they changed. By the fourth day, they will stand up and say, ‘I don’t want revenge. It just doesn’t help. It will only instigate more violence.’ [Usually, by the end] there is so much compassion and understanding for each other.”

HimRights also hosts public hearings in which local policy makers, along with representatives from both sides of the conflict, hear testimony from women and children on how the violence affected them firsthand. In the Smith article, Shakya said she hopes that dialogue will ultimately translate into policies based on mutual understanding, with an eye to reconciliation and lasting peace based on social justice.

Beyond Beijing, also chaired by Shakya, consists of established female leaders in the fields of women’s rights, social justice, media, political empowerment, law, and community development in Nepal. It has a network of 182 committee members, plus 625 affiliated members, at the national, regional, district, and village levels. “From the beginning, Beyond Beijing embraced marginalized women in Nepal, notably dalits and indigenous women in remote regions, and ensured that they were represented at all levels of the organization,” said Shakya.

Shakya, who is married with two adult sons, told Peacebuilder that her long-term goals are “to change societal attitudes toward women and children. Unfortunately, the patriarchal value system will not go away easily.”