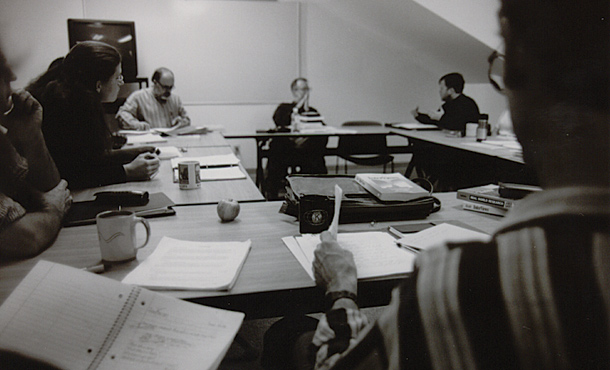 1. More impact than they foresaw

In the booklet When You Are the Peacebuilder, published just nine years ago [2001], the three authors – then all fresh graduates from CJP – wrote: “Most of us – including the authors – will never be famous. We’ll not work at the UN, or appear on television, or be written about in history books.” Actually, one of the three authors (Sam Gdaydee Doe) now works for the UN, and all of them have found themselves in media reports in reference to their work or views on building peace. If you Google their names – Babu Ayindo and Janice Jenner were the other two authors – you will see they have had a far greater impact on the world than they anticipated back in 2001. They have been research-based analysts, trainers, strategists, communicators, and developers of new peace-related programs. They have directly influenced tens of thousands and indirectly influenced countless more. In a generation or two, they may even be in history books.

About half of this group of early alumni came to CJP because they were hovering at the edge of “burn-out.” They needed time and space to regain their resiliency. They had experienced war-inflicted trauma, the violent deaths of loved ones, or were exhausted from struggling to address terrible wrongs over many years. In their interviews, all of those who faced burn-out said CJP recharged their batteries, though one spoke of the ongoing effects of the genocide-type trauma he survived. In short, CJP served as a resource for hope and regeneration for this group.

Every person in this group of alumni appears to be as well motivated as he or she was a decade or so ago. But certain members of the group have gone through divorces, bungled paying jobs, and found themselves at odds with other peacebuilders. In other words, being a trained peacebuilder is no guarantee of success in transforming all situations of conflict. Yet, by and large, when any of them meets another CJP-trained person in the world, there is an immediate sense of kinship. They nod when hearing the term “EMU mafia,” coined by Babu Ayindo in reference to the CJP-trained people he often meets in trainings, research, and social action processes around the world. This “mafia” consists of overwhelmingly well-intentioned people who are doing their best to, first, do no harm and, second, if possible, have a positive impact, while learning from the mistakes they have made along the way.

Alumni whose work is focused upon the Southern Hemisphere are most likely to spontaneously voice concerns about socio-economic structures or systems that they believe are fundamentally unfair and that fuel violent conflict. In a paper they wrote in 1999 and revised in 2004, alums Akum Lonchari and Babu Ayindo made this trenchant comment: “It is time third world people asked themselves rather seriously whether people who live in squalor, who are oppressed by national and global forces, and who are struggling for a little freedom are in urgent need of prejudice reduction workshops, communication skills, and peace manuals.” By contrast, alumni working in the developed parts of the Northern Hemisphere are more likely to express interest in personal transformation and interpersonal relationship-building as ends in themselves, rather than as building blocks for systemic change. There are, of course, exceptions to this general observation, as exemplified by Laura Brenneman in the US and Jeff Heie in the UK.

The founders of CJP did not intend for the MA in conflict transformation program to be a stepping stone for students who wished to subsequently earn a doctorate. On the contrary, they envisioned a unique graduate program – one that would prepare “reflective practitioners” for real-world work, rather producing graduates oriented toward academic teaching and research, as was being done at another Virginia institution, George Mason University, at the University of Colorado at Boulder, and elsewhere. Yet the last decade has shown that even people heavily involved in practice often hunger to acquire the highest degree offered. Some CJP grads want to teach at the university level. Some feel that having a doctorate gives them more credibility, regardless of their field of work. A few want the additional time in a university setting to think, research and analyze. Of the 36 alums in our group, eight (22%) have entered doctoral programs, and three have completed this degree.