Dr. Susan Schultz Huxman’s office walls in the presidential suite at Eastern Mennonite University are newly decorated with archival photos commemorating the institution’s 100-year history. But she’s not often there to contemplate those images.

To learn more about the institution she now leads, Huxman has spent the weeks since her Jan. 1 start date in an “immersive and invigorating” tour, motivated by her goal of meeting “as many EMU stakeholders as I can in one-on-one visits early in my term,” she says.

“Presidents shouldn’t spend much time in their offices anyway,” she adds.

Key EMU staffers rallied behind her slogan, “100 People in 100 Days,” helping Huxman to exceed that number long before the actual 100th day, falling three days after her April 7 inauguration as EMU’s ninth president.

“I learn so much about EMU and its distinctiveness outside of the office, engaging students, alumni, faculty and staff on their own turf,” says Huxman, who brings decades of academic and professional experience in the field of communications. “These stories I hear outside my office empower me, sustain me and connect me with supporters of EMU.” 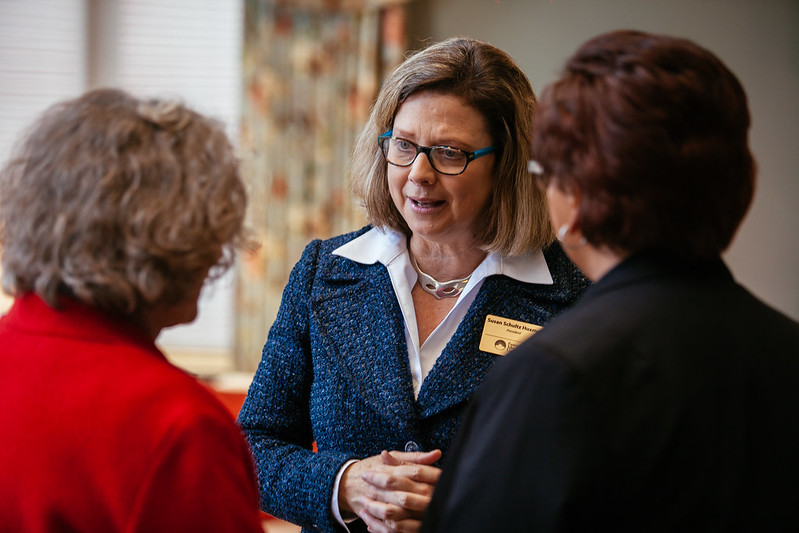 She kicked off her first day on campus, making a huge dent in her “100 by 100” goal with a whirlwind 8-hour tour introducing her to at least 30 people and a blue lion—EMU’s mascot, Herm. The day was downright frosty and the pace frenetic, but Huxman was game for the challenge, shaking hands, learning names, and getting behind the scenes of places such as the coffee shop and post office, posing for pictures along the way.

In the next weeks, Huxman connected in more leisurely appointments, including attendance at athletic events and in meetings with students, staff and faculty groups. She received a host of leaders from area churches, businesses, educational institutions and community non-profits during a special President’s Reception.

Days later, she headed to Florida for a busy stint of donor visits, a board of trustees meeting and the presentation of a keynote address at the Mennonite Education Leaders gathering. This was her second trip to Florida in three months: the first days in her new role were spent at the Council of Independent College’s New President’s Institute in Orlando.