The Eastern Mennonite University baseball team didn’t have to settle for California dreaming over this year’s mid-March spring break. They boarded a plane to Los Angeles and experienced the real thing. [See a photo slide show below or click here.]

The trip came about thanks to EMU coach Ben Spotts, who traveled to southern California five times while serving as an assistant baseball coach for perennial power Bridgewater College. He enjoyed the trips immensely, and he learned what the region had to offer.

So when he became EMU’s head coach in 2013, he knew he wanted to give the Royals a similar opportunity.

“We went to Florida the last three years, and I figured we should do something different,” Spotts says. “It’s good baseball-wise, it’s good for the guys to get a look at another part of the country—someplace many of them might not see otherwise—and it helps with recruiting to do something that’s different.”

Baseball in California a ‘once-in-a-lifetime opportunity’

Spotts says the trip had to be lined up about a year in advance to get on the southern California teams’ schedules—much to the chagrin of last year’s seniors, who were hoping to head west. For the players who returned this year, though, it was worth the wait.

“Going on a big trip like this was priceless for me, because I don’t know when I would have had the chance to get out to the West Coast if it wasn’t for Coach Spotts putting this together,” says Brendon Salladay, a sophomore catcher from Chesapeake, Virginia. “The fundraising and hard work all year paid off big-time with this trip, because it was a once-in-a-lifetime opportunity.”

Salladay says he thinks it also makes the EMU program stand out more, as well.

“This is a great way to bring in future athletes, because they will see that coming to EMU is a first-class experience all around,” he says. “No one would have guessed that a small school like EMU could go out to the West Coast and compete with California schools.”

A total of 46 people, including 42 players, made the trip. Spotts was able to rent a bus to accommodate the larger group. To cover the costs, players helped with parking at James Madison University football games for five Saturdays during the fall and sent letters to at least 10 family members, friends or neighbors asking for support.

“The goal was for the guys not to pay anything for it or very little,” Spotts says. “It was great to take kids who had worked so hard for it and do something special. It really worked out.”

The team played three games during their West Coast road trip, against Whittier College, the University of La Verne and Chapman College; a fourth scheduled game, against Claremont College, was rained out. Spotts also made sure they saw some of the area’s highlights, including the Rose Bowl, Dodger Stadium, Hollywood, Sunset Boulevard, the Santa Monica Pier and “nosebleed” seats for a Los Angeles Lakers game.

“It was a great time to connect with one another, whether it was in the airport, on the plane, bus rides, touring the city and at the different schools we played on the trip,” says senior Nic Love, a first baseman from Bedford, Virginia. “Being able to experience a different brand of baseball from the West Coast was awesome, and taking in the beauty and excitement of the LA area was something I will always remember.”

Spotts says the team will return to its regular Florida spring break tour next spring, but he plans to keep California or similarly unique experiences in the rotation.

”At some point,” he says, “I want every class of kids to experience something like that.”

EMU fields varsity and junior varsity teams. The Royals finished sixth in the conference last spring with a record of 10-10, qualifying for the six-team ODAC Tournament for the first time since 2002.  They ended with an overall record of 16-18. 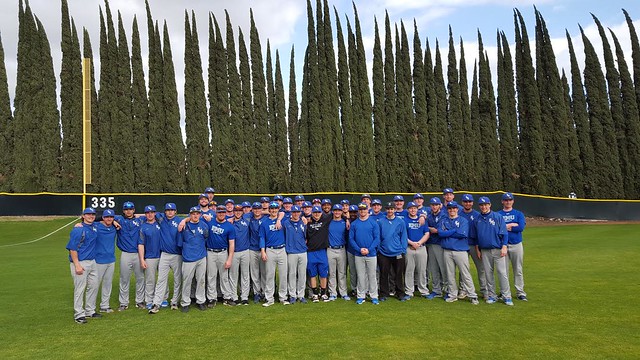