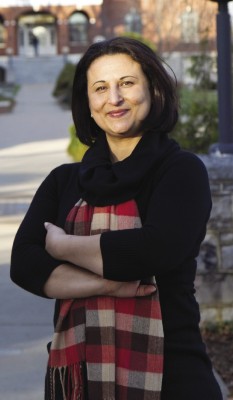 “We are different in every possible way,” says Huda Abu Arquob, MA ’06, about the man she has worked alongside for the last five years in San Francisco.

Abu Arquob is a Muslim woman on the short side of average height whose extended family lives in Hebron, Palestine. She works with Aaron Hahn Tapper, a 6-foot-6-inch Jewish-American man with a PhD in comparative religions. Together they co-lead Abraham’s Vision, which encompasses several academic programs aimed at getting young adults to understand and change the patterns of conflict that have shaped their lives.

“We give each other the space to disagree and to be honest and passionate about our disagreement,” says Arquob, adding in the next breath that she loves Hahn Tapper’s two young children and is close friends with his wife. “If we (Abu Arquob and Hahn Tapper) never disagreed, we would never really know each other!”

As if they themselves do not represent enough religious diversity, Abu Arquob and Hahn Tapper do much of their educational work through a Jesuit university, the University of San Francisco.

In Abu Arquob’s eyes, what she and Hahn Tapper are doing through Abraham’s Vision is similar to what CJP does: “The transformation I experienced at EMU is what we see happening with young people as they move through our programs.”

Abu Arquob says her story of resilience and survival is typical of her Palestinian people. Though college-educated, her parents were often forced to find employment in foreign locales, separated from their loved ones. Abu Arquob is the oldest of 12 children born to her parents, and all the children managed to get an education under extreme hardship. Abu Arquob, a former teacher on the West Bank, won a Fulbright scholarship to study at EMU.

Abu Arquob refers proudly to her feisty, self-sufficient paternal grandmother—“an illiterate woman who saw that all of her kids, three daughters and four sons, were educated.” Her grandmother accomplished this by excellent management of the family’s land and marketing of its produce, despite her husband’s imprisonment for seven years.

At Abraham’s Vision, Abu Arquob has seen sea-tide changes among the participants, such as a young man majoring in physics at Stanford who switched to addressing human rights through a law degree. And then there was the formerly bitter law student who ended up in Egypt training electoral workers and monitoring elections. Abu Arquob said many of the students who arrived feeling suspicious of “the other” end up staying in touch with the members of their cohort long after their program has concluded.

“Unlike some programs that mix Israelis and Palestinian young people, we don’t believe that just having contact with each other is transformative—we don’t sweep our differences under the rug,” said Abu Arquob.

“We believe it is important to understand social-identity and power dynamics of people in conflict. We put a huge amount of effort into healing collective and individual traumas before we position people to work together to resolve their conflicts.”

Ultimately, at least some of the students who come through an Abraham’s Vision program will move into leadership positions throughout society, says Abu Arquob. That is when she and Hahn Tapper expect to see fundamental breakthroughs in seemingly intractable conflicts.

Abraham’s Vision runs three distinct programs, all accredited through the University of San Francisco. Based on the Abraham’s Vision website, the programs consist of the following: