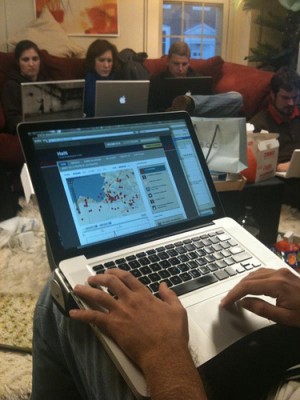 Reports were trickling in from our friend and coworker living in Kenya that the situation was rapidly deteriorating. After what appeared to be a stolen presidential election on December 27, 2007, the resulting violence seemed to be drawn along tribal lines. The 100 year-old mission compound where Esau and his family lived seemed to always be insulated from national crises like this. But on January 9, my husband got the email. A flyer, causing mass fear as it flew over the base declared the following threats: “We swear by the sacred Mugumo tree that when we descend upon Kijabe, we shall not leave any Luo alive …” Afraid for their safety, Esau (a Luo) and his family moved to a friend’s house away from Kijabe to live in hiding for several weeks. At the end of the 59-day political crisis, the sobering death totals throughout the country were approximately 1,500 dead, 3,000 innocent women raped, and 300,000 people internally displaced.

Patrick Meier had grown up in Kenya and happened to be back visiting his parents during the crisis. Articles with headlines like: “Kenya Is Not Burning,” were surfacing from the Kenyan government media outlets, who were trying to manage the national and international opinion through disinformation practices. He read these and wanted to do something to improve the ability to report human rights abuses resulting from the conflict. He enlisted the help of some Kenyan nationals to assist in realizing his idea. They called it Ushahidi (pronounced OO sha hēdē), which means “testimony” in Swahili. The system was simple, but novel in that it integrated Google Maps with Short Message Service (SMS) otherwise known as text messaging. It employed the idea of crowdsourcing, which harnesses eyewitness accounts of acts of violence from the general public. Ushahidi allowed people to send an SMS to a free, local number with their location and a description of what they saw.

The results of the experiment were extremely successful: several hundred texts were received with first hand reports of riots, death, property loss, sexual assaults as well as peace efforts throughout the country. Ushahidi had provided a method for creating real-time mapping that documented acts of violence and peacbuilding using common people. The system also provided a warning system, where people could automatically receive a text message if an alert was posted geographically close to a self-selected location.

This prototype system was modified to monitor election violence during the presidential election in Burundi in July of 2010, as well as Kenya’s constitutional referendum in August, 2010. In both of these cases, the system produced reports of little to no violence resulting from the elections.

Ushahidi was used most recently during the Arab Spring protests in Egypt and is currently monitoring the conflict in Libya. With the high penetration of the internet in cities like Cairo and Alexandria, the deployment in Egypt provided the opportunity to also incorporate Twitter tweets (in addition to SMS) into the conflict map.

Overall, this system, which simply combined multiple existing technologies, yielded a powerful conflict monitoring tool. This tool, however, is not void of weaknesses. In my next entry, I will discuss some of these weaknesses as well as a simple alternative system for monitoring election violence. [Mara J. Roberts (MA, ’11) is Director of Conflict Recovery at New Dominion Philanthropy Metrics.  This is the first of a two-part series on the use of technology in monitoring conflict (see part two).]

7 comments on “The Next Generation Conflict Monitoring System: People and Technology”