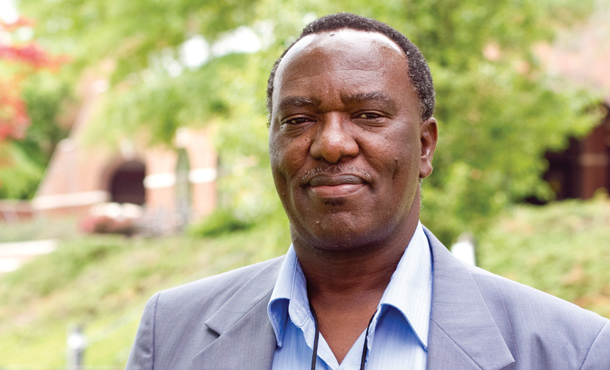 Since fleeing his native Burundi in 1996, Jean Ndayizigiye has been rebuilding his life in exile. He is on the board of directors of the United Burundian-American Community Association (http://ubaca.org), the largest organization of Burundians in the USA.

His association launched an annual celebratory convention three years ago – first held in Washington DC on the Fourth of July weekend, then in Dallas, Texas, and most recently in Atlanta, Georgia – to reduce Burundians’ sense of isolation and to build a vibrant community of mutual support. About 600 went to the convention held July 3-5, 2010, in Atlanta.

In the summer/fall 2005 issue of Peacebuilder, writer Sue Gier summed up Jean’s life before coming to the United States this way:

A teenage boy beaten near death by Tutsis classmates for being Hutu. A fugitive in hiding for three months by the grace of a Muslim woman. A prisoner starving in a filthy dark cell for six months. One year as a farm peasant.

A resurrected student in a Jesuit school. One of 10 in Belgium on college scholarship. A returnee to Burundi as a civil engineer, a senior official – director of Public Works, adjudicator in the Ministry of Finance – excelling at nation building.

New military rulers. Hunted again. A refugee, this time seeking and receiving political asylum in the United States. A man without hope of returning to his home or using his talents, skills, experience.

Trained in accounting, Jean works part time as a financial counselor for the residents of Gemeinshaft, a program to assist former prisoners to transition to living productively in mainstream society. He came to the US with his wife, Spes, also a Burundian refugee. They have four young adult daughters. He is an active member of Park View Mennonite Church and regularly contributes to charitable causes, including to an orphanage in Burundi.

Jean stresses that his greatest challenge through the years has been finding peace within himself: “You have to have inner peace before you can give it to someone else. You have to find your own blind spot before you can accept that others have blind spots.”