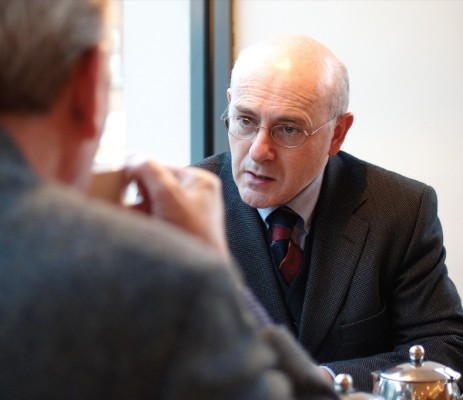 Since I should not assume that everyone here is informed about the nature of the conflict in Northern Ireland, I will give you a quick history lesson.

Centuries ago Ireland came under the control of England. As part of that process, large numbers of English and Scottish people were encouraged to settle in the north of Ireland. While most of the native Irish were Catholic, most of the settlers were Protestant.

At the start of the twentieth century there was a sustained campaign to break the link with Britain.

However, in the north there was a campaign to maintain the link or union with Great Britain. On both sides of this argument, significant numbers were prepared to use violence in support of their cause.

In 1920 the British settled the matter by dividing Ireland – granting independence to most of it and keeping the northern part within the United Kingdom.

However, around 40% of northerners were Irish nationalists – people who wanted independence from Britain.

Therefore, from its creation in 1920, Northern Ireland was a state whose citizens differed over their national allegiance.

Consequently, for several decades, the leaders of the Protestant, unionist majority, discriminated against the Catholic, nationalist minority.

The laws and institutions of the State reflected this discrimination.

By the 1960s, frustrations within the Catholic, nationalist community found expression in a campaign for civil rights. The state responded with brutal force.

Within the Catholic community, there were people who began a new campaign of violence to end British rule and end the partition of Ireland. These people are known as republicans.

Within the Protestant community, there were people who took up the gun to defend the link with Britain. These people are known as loyalists. While the majority of Catholics (nationalists) and Protestants (unionists) did not support the use of violence, the terrorist campaign fought by republicans and loyalists and the State’s campaign of counter-terrorism by the use of the British army and the police, meant that the Northern Ireland conflict became defined by widespread violence.

3,500 were killed. Thousands more were injured. Thousands were traumatized by violence. Thousands were sent to prison. However by the 1990s there was recognition that violence would not deliver a solution to the conflict and that any effort to find a political answer would only succeed if republican and loyalist paramilitaries were given a voice at the negotiating table.

In Ireland, over the last 15 years or so, we have been living through a period known as ‘the Peace Process’. This period has seen the establishment of political negotiations, ceasefires by the main republican and loyalist paramilitary organizations and fundamental reform of aspects of our system of governance in order to command the respect and allegiance of all our citizens.

…[P]rogress has been so profound that it is possible now to speak of the end of ‘the Troubles’ – a 30-year period when our conflict was expressed in violence and a generation grew up in the shadow of the gun and the bomb.