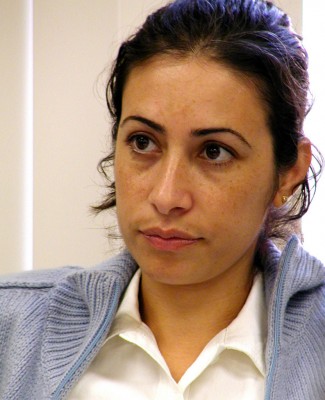 End the Seige on Gaza

Rania Kharma, MA ‘03, worries that the world is abandoning Palestinians, ignoring a massive humanitarian crisis in the Gaza Strip where she lives.

In messages via the Internet – one of the last links of Gaza residents to the outside world – she describes Gaza as a crowded, hungry, desperate prison. She says that Israel – which controls the border crossings – allows few people, little food and medicine, and virtually no basic goods through the checkpoints.

Kharma wrote this fall to the CJP listserv: “I, personally, was prevented from crossing Erez checkpoint to Ramallah three times.” (Kharma has been employed by both the World Bank and Palestinian Authority in high-level humanitarian positions, such as coordinator of the Emergency Services Support Programme.)

“Last time I was trying to cross, there was a little child, around 7-8 years old, a cancer patient, who had an appointment in a hospital in Jerusalem. He also was denied access, and he cried when he knew that. I will never ever in my whole life forget his little face covered with tears as he knew he was denied access. We both walked back to Gaza. I have made it so far, but I wonder if he did.”

About 1.5 million people are squeezed into a narrow strip of 139 square miles (360 sq. km.) where local water is undrinkable. A 2002 report by CARE International, issued five years before the current clamp-down, noted an alarming shortage of basic foods in Gaza, such as meat, poultry, dairy, fish, powered milk, and infant formula, coupled with spiraling prices due to scarcity. “The Palestinian Territories, and especially the Gaza Strip, face a distinct humanitarian emergency in regards to acute and moderate malnutrition,” said CARE at that time.

On July 7, 2007, CARE International issued a new appeal for “water, sanitation, food, health and social assistance in the Gaza Strip.” “The recent destruction of essential infrastructure compounds the difficulties faced by thousands of Palestinians whose resilience has been tested by increasing levels of violence, food shortages, and loss of incomes,” said CARE.

“Of immediate concern is the impact of fuel and power shortages on access to water, disposal of sewage and maintenance of emergency health services. Of longer term concern is… the psychological trauma of conflict on the civilian population, especially children.”

In early October 2007, Kharma and more than 30 other humanitarian leaders in Gaza, including a number of doctors, launched the Palestinian International Campaign to End the Seige. Kharma coordinates this “nonpolitical initiative to mobilize support from all those who believe in our right to live.”

In an October 22 e-mail to the CJP listserv, she wrote: “We will organize a media campaign, and we need your help and ideas… please, tell me that those who taught me about peace are ready to work for it.”

On November 27, she again wrote asking CJP’ers to sign and help circulate a petition to break the siege. Rania Kharma’s signature was No. 40 on the petition.

The 41st signature belonged to Gervais Condo, MA ’06, originally from Rwanda and now living in Virginia. No. 42 was Paulo Baleinakorodawa, MA ’04, in Fiji. No. 43 was CJP donor Clarke Reese in Waterloo, Ontario. And No. 44 was Anne Nyambura, MA ’06, in Somalia.

Less than a month later – on December 13, as the number of signatures on the petition hit 3,758 – a Gaza physician managed to make it through one of the two checkpoints to bring information to the Israeli peace group Gush Shalom.

“When there is a hole in the ceiling, it cannot be repaired,” Dr. Eyad Sarraj told Gush Shalom members. “It is impossible to go on building the children’s hospital which has been begun. A medical instrument that goes out of order cannot be repaired, for lack of spare parts. For example: incubators for babies.

“The severely sick cannot reach a hospital – neither in Israel, nor in Egypt or Jordan,” he continued. “The few permits issued are often delivered after a fatal delay. In many instances, patients are condemned to death.

“Practically all enterprises have been closed for lack of raw materials. Thus, the Coca Cola factory has closed down,” said Sarraj, who heads the End-Gaza-Siege campaign. “Students cannot reach their universities abroad. Palestinians who have contracts to work abroad are not allowed to leave.”

Israel’s crackdown on Gaza worsened after June 14, 2007, when militants from Hamas disregarded the pleas of their own elected leaders in Parliament and launched armed attacks on the other political party that held power, Fatah. After much bloodshed within Gaza, Hamas gained control of the entire territory.

After this, Israel further tightened its grip on the Gaza Strip, imprisoning the Hamas militants (regarded as terrorists by Israel), but also the entire civilian population. Dr. Eyad Sarraj noted that the Hamas militants, given their position of power, are able to find ways to keep themselves fed; it is the rest of the population that suffers acutely.

Kharma is asking her friends and colleagues “to utilize all methods available, to stop the collective illegal punishment imposed on the people of Gaza.”

Commentaries and letters submitted to newspapers around the world, posted online or broadcast would be one way of arousing concern for Gaza’s plight, as would letters to Israeli embassies and international humanitarian organizations, such as the Red Cross.