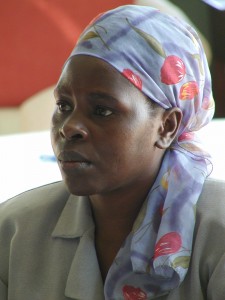 Dr. Tecla Namachanja Wanjala is a Kenyan peace advocate and social healing consultant. She holds a PhD in Peace and Conflict Studies from Masinde Muliro University of Science and Technology. She is a renowned consultant on matters related to Transitional Justice, Conflict Transformation, Social Healing and Reconciliation, among other things. She has a wealth of experience spanning over 25 years.

She served as the acting Chairperson of the Kenya’s Truth Justice and Reconciliation Commission (TJRC) that was formed to investigate the past injustices and human rights abuses that were committed in Kenya. Despite the turbulent times that the TJRC faced, Tecla was able to navigate the murky waters and eventually guide the commission to successful completion of its mandate and subsequent release of the final report in 2013.

Besides TJRC, Tecla has worked for various local and international organizations that promote peaceful co-existence. She is currently the Program Manager for Green String Network that promotes social healing and reconciliation among Kenyan communities.

She once worked for Pact International as the Chief of Party for Peace in East and Central Africa from 2014 to 2015. Between 2007 and 2009, she was Pact Kenya’s Deputy Chief of Party. She spearheaded the trauma healing processes in response to 2007/2008 Post Election Violence in Kenya.

Earlier on, between 1996 and 2003, Tecla worked as Coordinator for Peace and Development Network (PEACE-NET); an umbrella organization for Faith groups, NGOs, and CBOs working to transform conflicts in Kenya.

Tecla, who holds a Maters’ degree in Conflict Transformation from Eastern Mennonite University, USA, is recognized as a ‘Pillar of Peace’ for the intervention work she undertook during the ethnic clashes in Kenya (Mount Elgon region) in 1991, 1992 and 1997. Globally, she was one of the nominees for the 1,000 Women for the 2005 Nobel Peace Prize. She has travelled extensively across the world to attend trainings and offer talks on matters related to peace and conflict.

For other articles about Tecla, see: