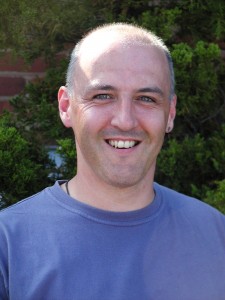 Since graduating in 2006, I have had the pleasure of working for Catholic Relief Services based in Baltimore, Maryland. CRS is the humanitarian aid and overseas development agency of the Catholic church in the United States.

I still smile at the irony of a bitter and twisted Northern Irish protestant working for one of the biggest Catholic agencies in the world! CRS is an agency that is seriously tackling the questions of how we incorporate the notion of peacebuilding into our work and indeed into our very being. We ask difficult questions of ourselves: such as what is the use of providing food and shelter to the internally displaced in Darfur if we choose to do nothing about the conflict which made refugees of them in the first place?

As part of my work with CRS, I have had the pleasure of traveling throughout the US sharing something of the vision CRS has for peacebuilding. However, more and more I am asking myself the question “So what?” What does what I learned about peacebuilding tell me about the world in which I live and the world in which I want our little boy Liam to live. Granted I have many fine-sounding theories of social change. But what difference can I make.

The point is I can make a difference. I needed to spend two years in Harrisonburg, Virginia to remind me that change can happen and that it starts with me and with the many, many wonderful and talented people I met at EMU and meet through Catholic Relief Services. Learning more about theories of social change and asking the “so what” question has made me more aware of the difficulty of the task of creating a world that is safe and secure for all of us. However, knowing the difficulty of the task has made me wiser but no less determined to make this a world in which we can all live in peace.

When I married Emily Stanton in 2003, (Emily is a graduate of the CTP class of 2000) we agreed that EMU was a good fit for me, not least because we could be in the United States, close to Em’s mom and friends. We remain in the US for those reasons and also because I needed a challenge to my professional peacebuilding work that I may not get by returning to my native Northern Ireland.

I had the pleasure of taking my theory class with Jayne Docherty. Let me clarify ‘pleasure’ – after a Wednesday afternoon in Jayne’s class, I needed to lie down in a dark room to get my brain back into some kind of functional order. Jayne had the audacity to demand an academic rigor from her students and I really appreciated that.

However, what melted my brain (more than trying to remember the many theories of social change) was the oft-asked question “So what?” Jayne was practical enough to know that theories don’t change the world, people change the world. She challenged us to make real what we learned in the classroom. My two years at EMU were extremely pleasurable and I miss the Shenandoah Valley terribly. I could have debated the merits of certain theories all day with colleagues who blew me away with their intellect. However, it is my responsibility and duty to take my acquired knowledge and be where God would have me share it with others.

See some of Hedley’s work here.