In Ghana this spring on her capstone project research travels, Talibah Aquil stepped into a slave castle-dungeon, where over the course of 400 years, hundreds of thousands of Africans were imprisoned by European traders before embarking on a terrifying, often deadly journey to a life of enslavement.

“It was one of the hardest yet most fulfilling moments,” she remembers. “Many African Americans know nothing of our family tree tracing even six generations back. Visiting the castle dungeons was one of the only times that I KNEW I was standing in some place where my ancestors stood.”

Particularly painful, she said, was the knowledge that in the space above, their white European captors worshipped God. She remembers a sign above the small door that the Africans were forced to walk through as they entered the ships that carried them away from their homeland: “It read ‘The Door of No Return.’ In that moment I knew. I returned for them. THIS was for them.”

THIS describes her moment of ancestral connection, historical trauma and suffering from long-borne scars. THIS also describes new wounds from her experiences at CJP and the healing that comes from new learning and understanding.

Months later, after creating and sharing a multimedia performance about that journey, Aquil moves confidently forward in her ministry.

Here is some of her story. 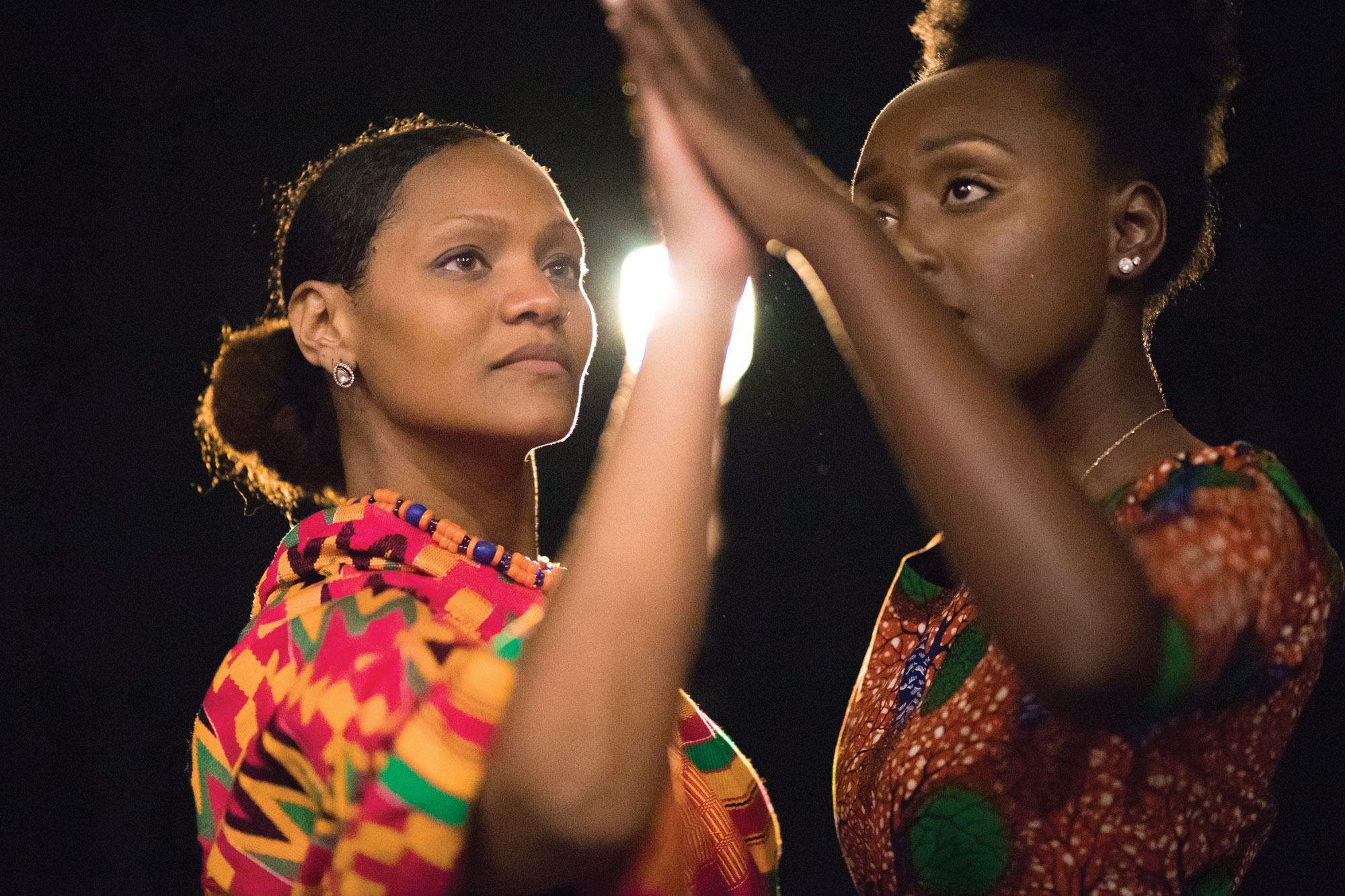 I grew up in a Mennonite church in Bronx, New York, called King Of Glory Tabernacle. The name Eastern Mennonite University has always circled many of the spaces I was a part of — I had even spent some time on campus with the seminary’s Learning, Exploring, Participating (LEAP) Program for high school students in 2003, before attending the Global Youth Summit and the 14th Mennonite World Conference Assembly in Bulawayo, Zimbabwe. However, I never thought or had the desire to attend the university itself.

I graduated with a degree in musical theater from Howard University, travelled worldwide as a performer with STEP Afrika, and served in the Peace Corps in Rwanda. As this term of service was ending in 2016, I realized my passion for listening and supporting people through their difficult trials and holding space for people to share and release their trauma. Among other experiences, as a member of the Peer Support Network for Peace Corps volunteers, I had spent many hours visiting my neighbors in my village to lend a supportive ear.

I began looking for graduate programs that incorporated performing arts therapy/healing. The Center for Justice and Peacebuilding kept coming up in my search engine. The flexibility to create my own capstone project at the intersection of arts and trauma healing was compelling. In my spirit, I just KNEW that I was supposed to come to CJP. It was one of the times in my life where God gave me clear direction of where I was supposed to be.

MOVING TOWARDS A CAPSTONE PROJECT

My studies at CJP led me into so many concepts around power and privilege and I gained the language and skill sets to begin to articulate many of the grievances I had around the way my identity as a Black person in America has always been portrayed. Many painful emotions arose around this.

I began to read up on some of the stories of other people of color who felt the same way … first Dr. Maya Angelou’s All God’s Children Need Traveling Shoes and then Homegoing by Yaa Gjasi. This is how Ghana first spoke to me. 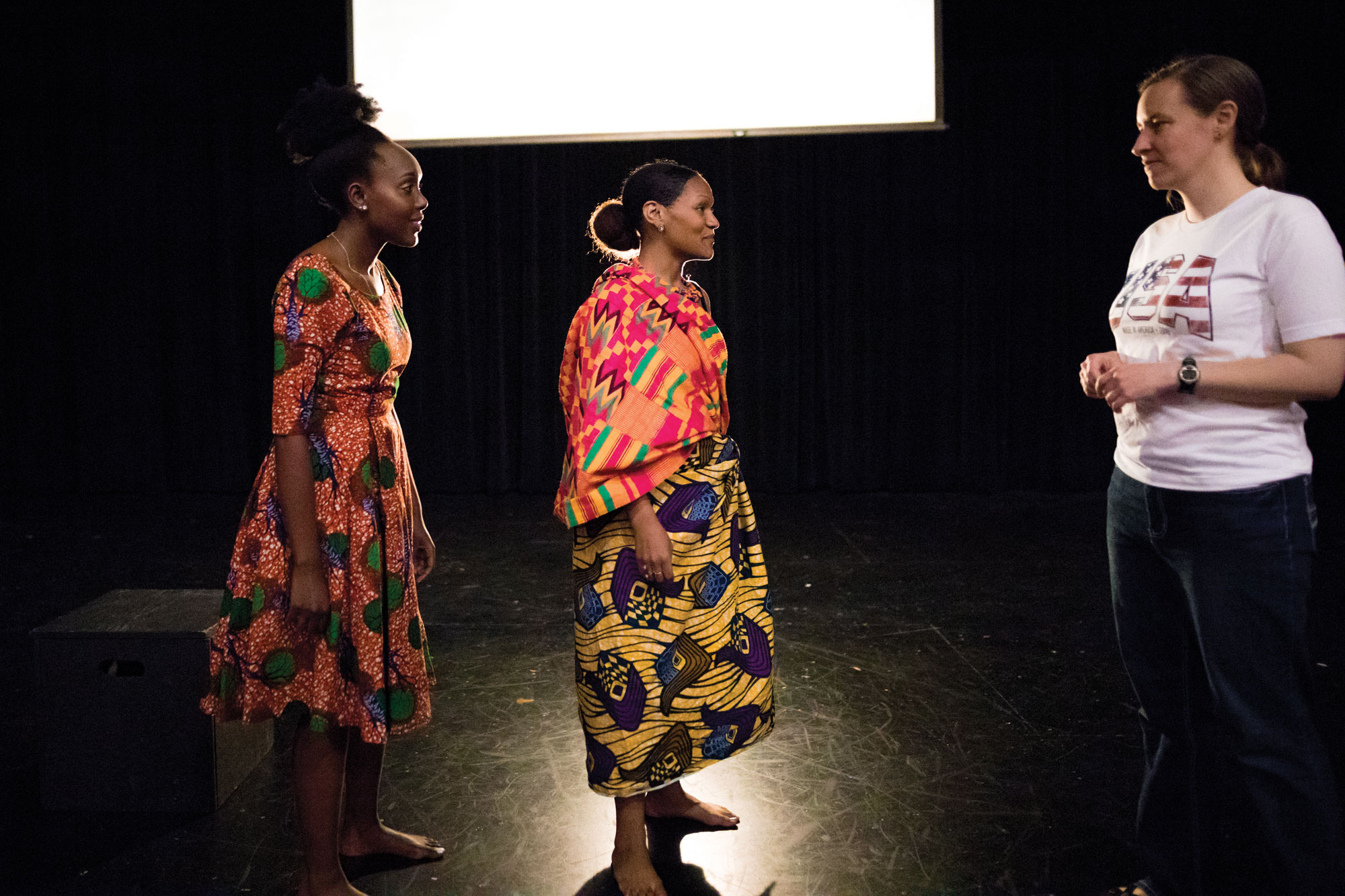 A major objective of my practicum was to learn about my ancestry pre-slavery – from a place that does not begin with pain and trauma but that also adds to the fabric of my identity. In Africa, I was often asked “where I was from” on the Continent. This question led me to conduct research with ancestry.com. I found out that out of all of the African countries that I was from, Ghana had the highest percentage. Ghana truly chose ME. It was a beautiful place to begin my journey of learning about my people and myself.

My arts-based independent research project centered around exploring healthy and holistic approaches to reimagining the “identity formation” of African Americans and people of the diaspora who are descendents of slavery. I spent three months in Ghana during the “Year Of Return” to document the lived experiences of people of the diaspora who decided to move to Ghana and how that transition and connection to their history has shaped how they see themselves now. I also documented my own personal journey of self-discovery and healing. Ultimately, this collected “data” was shared through the lens of poetry, music, dance and video in a performance titled “Ghana, remember me…”

I continue to reflect on this powerful experience. Ghana changed my life. It reshaped the way I see myself AND the way I show up in the world now. This experience was more than just fulfilling a practicum requirement for me, I was able to gain the power I needed to reimagine, retell and reclaim MY/OUR stories centered around being a person of color in America. This trip to Ghana healed historical trauma, broke generational curses and counteracted all of the incomplete and harmful narratives that were told to me about “who I am,” from the world…. I will forever be grateful.

Now, I must go out and create more spaces and platforms for others to experience this same kind of healing that was gifted to me, and to celebrate the magic and the power that comes from the beautiful Continent of Africa.

The performance truly opened up a door for myself and I believe for many who came to experience it. At the request of CJP, I’ll perform it again this fall. My preparations have included more reflection on how I can open space to much-needed healthy dialogue around identity, healing and storytelling.

CJP has asked me to co-teach a class this fall semester called “Reimagining Identity” and I am truly excited and honored about that.

In January 2020, I move to Ghana to partner with the Peace Corps in more trauma healing work and the start of a docuseries, “We Are Magic.” I will be journeying to different parts of the beautiful continent of Africa and sharing the stories of those I am blessed to meet.