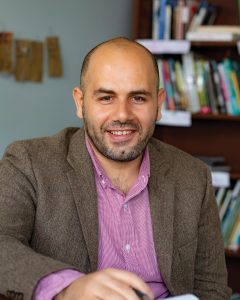 In spring’s weak sunlight, Danny Salim MA ‘11 enjoyed some fresh air on the busy Brooklyn street outside the ArabAmerican Family Support Center (AAFSC). In the windows above him hung large photo portraits of the city residents his organization serves. Service is a key theme in Salim’s life.

Before becoming a Fulbright Scholar at CJP, the Syrian native spent one year with the Vincentian Volunteers in Denver, Colorado, and a second year in Manchester, England, working in a variety of social services positions.

His first introduction to New York City was during a CJP practicum with the United Nations Development Programme. After graduation, Salim returned to the city to work for Nonviolent Peaceforce, an organization that advocates for the protection of civilians in violent conflicts through unarmed strategies.

Eventually, though, he wanted to delve into the root causes of violence at a community level – at a family level.

“To understand conflict, we really need to understand family dynamics because it’s all interconnected,” he said.

AAFSC, present in each of the five boroughs of New York City, offers many social, educational and legal services to new immigrants and citizens. In his role as director of the anti-violence program, Salim supervises a dedicated team of multilingual staff that works with victims of intimate partner violence, sex trafficking and sexual assault. He spends part of his time among the New York City Family Justice centers, which are operated by the Mayor’s Office to Combat Domestic Violence.

“Our partnership with the mayor’s office is to offer culturally competent, trauma-informed services to victims of all backgrounds, because we understand the challenges of the community and have the resources to be cultural brokers between the community and mainstream service providers,” Salim says.

Founded in 1994, AAFSC is the first Arabic-speaking social services organization in New York. With 13 languages spoken among nearly 60 staff, it serves the Arab, Middle Eastern, Muslim and South Asian communities, collectively described with the acronym AMEMSA. Though culturally and linguistically diverse, these communities have been subjected to similar oppressions and prejudice in the United States.

Salim started in the organization working on child protection issues, a space in which his conflict transformation training was helpful. One experience that “sticks in my head,” he said, was when he facilitated a parenting workshop with three men and three women using the circle process as its structure.

“This had not been done before, and after the first two sessions, I thought ‘What am I doing? Is this the right decision?’ It took two or three sessions before the participants began to open up, but everyone attended every session. And in the end, one person said, ‘I wish this was filmed or recorded because it could be a lesson to others.’ In the end, they wanted more,” he said. “They valued the experience to hear different perspectives and challenges the other person was going through and why that led them to where they were.”

That position also allowed him to follow the families of the participants, and see, first-hand, how their dynamics improved.

He repeatedly characterized his current work as “rewarding but challenging,” with its transformative impact less visible. Salim educates victims about their rights and options, empowering them to make their own choices, and offering support.

He deals with complex dynamics of gender, culture, language, power, relationship. Abuse, he said, comes from power differentials, “when one person has power over another.” Conflict is a power struggle. Thus transformation and resolution is more challenging in an abusive situation, “because intimate partner violence is abuse, not conflict, and the abuser has to first acknowledge the wrong, which is challenging.”

Yet, he said, “my background in conflict transformation is still with me. It doesn’t go away. Change happens over time but change can happen. It takes transformation and time. Justice can be challenging, because it takes time and effort. And justice can happen, too.”