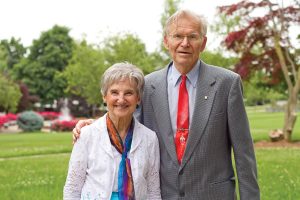 During the past year, we said goodbye to two wonderful individuals, James and Marian Payne, who played an integral role in the founding and sustainability of CJP. James and Marian leave the world a better place because of their commitment to peacebuilding. Their gifts have dramatically increased CJP’s impact in the world. Some 638 CJP alumni, including 84 Fulbright scholars, are now doing peacebuilding work in 65 countries. Many of these graduates received scholarship awards funded by the Paynes, and most of them studied in the classroom space renovated with a generous gift from James and Marian.

As Daryl Byler shared at James’ memorial service in May (held on EMU’s campus at James’ request), the Paynes were cheerful givers, generous givers and strategic givers. Cheerful: As James reflected in 2005, “We give out of commitment, cheerfully, out of our abundance, having more than enough.” Generous: Often, when we provided several options for funding projects, they responded “Why can’t we fund them all?” Their combined lifetime and estate gifts to CJP total over $2.7 million. Strategic: From the beginning, they pushed CJP to develop its funding base and not to rely on their gifts alone. That led to the creation of this very publication, Peacebuilder, and the addition of my position, a CJP-focused development associate.

Early on, James and Marian recognized that financial assistance for CJP graduate students was one of our greatest needs. In 2011, they established the James and Marian Payne Family Endowed Scholarship with a gift of $50,000. After additional lifetime gifts, gifts in memoriam and a significant portion of their estate, this scholarship is now funded to $700,000 and will be able to provide a full-tuition scholarship each year to a CJP graduate student. This is our first full-tuition endowed scholarship – and we hope it is the first of many!

A top priority for CJP in the coming years is to build our endowment to enable us to offer competitive, meaningful scholarships to graduate students from around the world. You have an opportunity to join James, Marian, and CJP in this great mission, and increase exponentially the global impact of our programs and alumni.

James and Marian wanted their giving to be a model for others: “In the right spirit, our giving should serve as a light and example. If we hide it, it cannot do so. We need to be an encouragement for others to give.” I hope this wonderful couple and their legacy at CJP inspire you, and I invite you to contact me with ideas for how you can give cheerfully, generously and strategically to CJP.