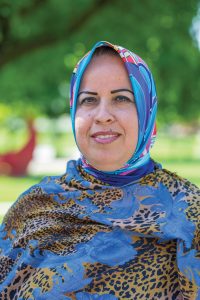 I RECENTLY HEARD Center for Justice and Peacebuilding (CJP) student Maha Mehanna tell her family’s moving story of being Palestinian refugees in Gaza.

Maha was one of several panelists invited to a post-production discussion of the play “The Vagrant Trilogy,” performed by the Mosaic Theater Company of [Washington] D.C. She described the limited choices – few of them good – she and her family have had living under military occupation. But despite the overwhelming odds, Maha holds onto hope. And she continues to build relationships with Israelis to work for a future of justice, peace and security for both peoples.

Maha’s experience reminds me of another Middle Easterner – the Apostle Paul – who wrote that suffering gives birth to resilience. Resilience gives birth to character. And character gives birth to hope (Romans 5:3-4). Hope, we know, is also vision.

Many CJP students come to us from situations of suffering and trauma – political oppression, war, poverty and the legacy of enslavement. But theirs are not stories of defeat and despair. Rather, their stories are of resilience and hope. The hardships they have experienced have given birth to powerful visions for justice and healing. Indeed, the most compelling visions are birthed from the deepest, darkest struggles in life.

In this issue of Peacebuilder, you will read many stories of resilience and hope – as CJP alumni engage a broken world. Despite encountering racism in Anabaptist institutions, Iris de León-Hartshorn has “stuck it out” with her brothers and sisters in Christ because of her vision to be part of God’s reconciling mission in the world (pages 4-5). And Tecla Namachanja Wanjala’s “new-dawn” dream of healing for Kenya grows from the country’s massive trauma (p. 31).

Still, getting students to Eastern Mennonite University is not without challenges. Visas are not the only issue. Graduate education is expensive and many of those who want to study at CJP do not have adequate financial resources to cover the costs. We are launching a major endowment campaign to boost our scholarship offerings. Our goal is to raise an additional $5 million by 2020. Will you help us offer more peacebuilders the tools necessary to birth visions of healing and hope in their communities?