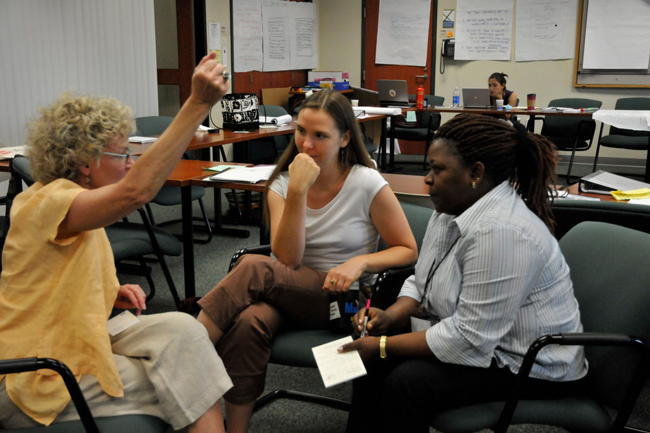 Doreen’s early life included schooling, becoming a teacher, entering marriage, and giving birth to two sons. In 1998, she lost her husband in the US embassy bombing in Nairobi. In subsequent years, she courageously continued her education, both in terms of participation in survivors’ groups and in formal education – ultimately coming to Eastern Mennonite University as a Fulbright scholar and completing a master’s degree focused on conflict transformation, restorative justice, trauma awareness and resilience. She engaged her own personal journey – including the gifts and challenges of the bigger picture in Kenya, East Africa and the world – and was a sharp and hungry teacher-learner at the Center for Justice and Peacebuilding. Read more…

Doreen was determined to use what she had learned to help shape peace and justice work in Kenya and the wider region. She applied appreciative inquiry in research and evaluation projects in Karamoja. She developed a learning community entitled “Justice that Heals” in Kenya, bringing together people from ten different ethnic groups, diverse professional, geographic and religious origins (from informal settlements, rural and urban, educators, peacebuilders, church leaders, military, police, emergency responders, donors, Muslims and Christians). She wanted to shape a different kind of conversation about justice and possibilities for long-term peace in Kenya, and she led that with her own story, creativity and relationships.

She and her organization, Daima Initiatives for Peace and Development (DIPaD), both engaged in long-term projects and responded to various crises in Kenya, including the Westgate mall and Garissa attacks, by offering STAR-based learning opportunities for survivors and responders. Many of the participants “came to see her as a second mother,” reports Carol Makanda, one of Doreen’s close colleagues working with the students from Garissa.

The personal vulnerability and compassionate listening Doreen infused into her work brought new life to many participants who worked with her.

Facilitating with Doreen, I witnessed a woman who could speak so many languages, not only Nandi, Swahili and English. She knew how to understand and make sense to people in the rural areas, how to resonate with highly educated, cosmopolitan urbanites, how to connect to urban youth who had not had access to education, how to bridge across cultures both local and international. She taught with her life, which traversed these many terrains – from the shamba (farm) to the city, from Kenya to the UK to the US, from quiet youths to high-ranking military and government officials.

She spoke and listened with her heart. She shaped spaces where people could encounter a healthy form of power, in her as facilitator and in themselves. She helped people understand the impacts of trauma and cultivate their resources for resilience. She started where she was, whether with her sons at home, with her team at the office, with loved ones in a foreign land, or participants in a healing circle.

Doreen passed away too soon on January 21, 2016. We dedicate this e-zine to her powerful memory, and we hope that the many seeds she planted may continue to bear nourishing fruit.