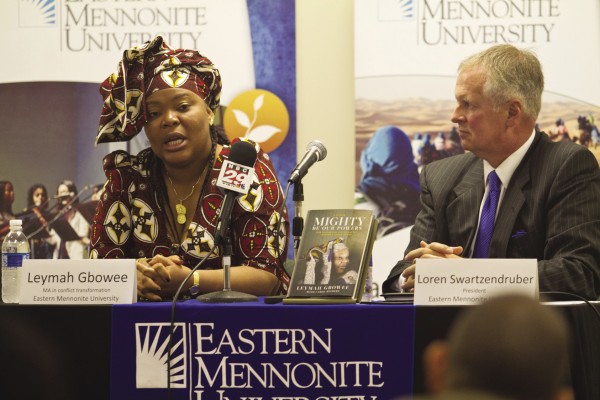 One week after Leymah Gbowee was named a winner of the 2011 Nobel Peace Prize, she returned to Eastern Mennonite University over the weekend of October 14-16 to be honored as EMU’s 2011 Alumna of the Year.

During that weekend Gboweee, a 2007 graduate of the Center for Justice and Peacebuilding (CJP), spoke frankly about her fear of losing touch with the suffering women she desperately wants to serve, as she tries to handle the overwhelming attention emanating from the Nobel Peace Prize.

She told students, staff, faculty and alumni gathered in Lehman Auditorium that she prays every morning and every night to do God’s work with humility, because that is how she will do the most good for the most people.

Since that weekend Gbowee has been a keynote speaker at major international gatherings, such as a TED conference in March 2012. The video of her TED speech had been viewed nearly 200,000 times as of April 19, 2012.

In her TED talk, Gbowee focused on her desire to educate and otherwise empower girls and women. This proved to be a curtain-raiser for her announcing in early April the launching of a new non-profit organization, the Gbowee Peace Foundation Africa.

At EMU’s Homecoming and at TED, Gbowee spoke of being a low-earning, single mother in the late 1990s and of having no choice but to ignore appeals to personally care for bright young girls who hungered for education but were abused instead. She spoke of a girl raped by her grandfather for six years and of villages where nearly every girl was exploited sexually.

She referred to Liberia’s teen pregnancy rate of three out of every 10 girls. “I was at that place and somehow I am at this place, and I don’t want to be the only person at this place. I am looking for ways for other girls to be with me.”

She spoke of traveling 13 to 15 hours per day on dirt roads throughout Liberia to hold meetings with groups of girls. “We go into rural communities, and all we do — like has been done in this room [at TED] — is create the space. When these girls sit … you unlock great leaders.”

She spoke about seeing 50 girls in one village become energized to the point of launching a voters’ registration campaign, with the slogan “even pretty girls vote,” which led to the defeat of an incumbent who had disparaged Liberia’s national legislation against rape.

“I am troubled when I see there’s no hope [among village girls], but I’m not pessimistic because I know it doesn’t take a lot to get them charged up.”

With USAID funding, the Gbowee Foundation is providing scholarships to four women to be part of the Women’s Peace Leadership Program, beginning at the 2012 Summer Peacebuilding Institute (SPI).

Gbowee’s honor was in recognition of her leadership of the Women of Liberia Mass Action for Peace, which brought together Christian and Muslim women in a nonviolent movement that had a key role in ending Liberia’s 14 years of civil war in 2003. The movement is chronicled in her memoir, Mighty Be Our Powers, and in the award-winning documentary, “Pray the Devil Back to Hell.”

Gbowee’s journey from being a destitute and depressed mother of four to being an assertive campaigner for peace began in the late 1990s when she received training in trauma healing and reconciliation from Lutheran church workers in Liberia during that country’s civil war. These workers had been trained by Barry Hart, a Mennonite peace worker in Liberia in the early 1990s and now a professor at CJP.

Encouraged by close colleagues in West Africa who had been educated at CJP, Gbowee first came to CJP in 2004 for SPI and returned in 2005 for a session of Strategies for Trauma Awareness and Resilience (STAR). In 2006-07, she was in residence at EMU as she finished her master’s degree in conflict transformation.

In her memoir, Gbowee credits another Liberian, Sam Gbaydee Doe, who earned a master’s degree from CJP in 1998 – along with CJP professors Hizkias Assefa, John Paul Lederach, and Howard Zehr – with particularly influencing her journey to peacebuilding.

“EMU opened my eyes that I was not the only crazy person in the world… It brought in a perspective of global conflict,” said Gbowee. Meeting fellow students of peacebuilding from around the world “put a face to those conflicts.” She added, “It has made the world a village for me.” Now when she hears about oppression and violence in other regions, she asks herself, “How I can help and how I can get helped by some of my other colleagues in this area?”

Gbowee co-founded Women, Peace and Security Network (WIPSEN) in the spring of 2006, with a fellow SPI alumna, Thelma Ekiyor, and a third woman, Ecoma Alaga, who previously worked for an organization founded by two CJP alumni, the West African Network for Peacebuilding. Due to the growing demands on her time, Gbowee has announced that she will relinquish her position as executive director of WIPSEN in December 2012.

Gbowee is now the mother of six. Her first-born son, Joshua Mensah, is a rising junior at EMU.