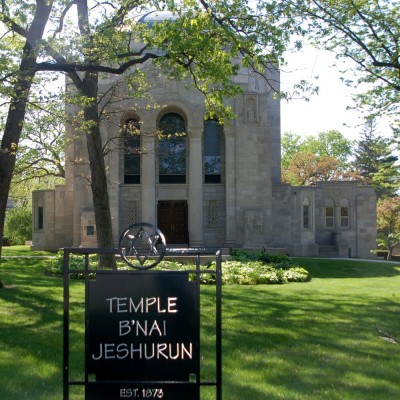 In March of 1994, in my former role as Bureau Chief in the Criminal Bureau of the Polk County (Iowa) attorney’s office, I read a troubling police report.  A few days earlier, members of the Temple B’nai Jeshurun in Des Moines awoke to find neo-Nazi graffiti scrawled on the side of their synagogue. There were no immediate suspects but there was anguish, anger, and outrage.  At one level, the incident was a galvanizing experience, bringing together the religious community of Des Moines in a way that I had never witnessed.  However, the incident also brought forth shadows normally hidden within many good and well-intentioned people, who cried out for a justice that had the character of that sought by vigilantes and lynch mobs.

After two weeks of uncertainty throughout the community, police made two arrests.  Charged with felony criminal mischief were an 18 year old male and his 17 year old girlfriend.  I decided to hold onto the case rather than assign it to one of the felony prosecutors.  I did so less because of the facts and more for the possibilities.

In 1991, I had been “irreparably damaged” by restorative justice, after reading Howard Zehr’s Changing Lenses at the suggestion of a friend. Since encountering restorative justice, I would pick up a file like this and ask questions such as: “assuming he or she did it, what is the best resolution, where do we go from here?” rather than the traditional questions of “who did it?” and “how can it be proven?”

After reviewing the file and considering the evidence, I placed a call to Rabbi Steven Fink.  I asked how he and members of the Temple were doing, and how they were moving forward.  He told me that he was angry, that others were angry and afraid, and that collectively they were stuck, unable to move forward.  I asked him if he had ever heard of restorative justice and of its potential for healing, and if he would consider meeting with the young offenders.  He said that my description of restorative justice made sense to him, that it was consistent with his tradition, but that in this instance he thought neither he nor other Temple members would ever consider meeting the young man and woman.  We left it at that.  I thanked him for his time, gave him my number, and encouraged him to call if he should ever have questions.

He did, one week later to the day.

There had been much discussion following our phone conversation.  He said that there were Temple members who immediately saw the wisdom of a meeting, but others who said that such a meeting would be used to minimize the harm done and would result in the offenders receiving just a slap on the wrist.  Rabbi Fink said that Temple members had met more than once and that by the end of discussions a consensus was reached that the Temple should go forward, even in the face of uncertainty and possible re-victimization. We talked about next steps and I told him that a staff member from our Restorative Justice Center, Betty Brown, would be in touch with him. Rabbi Fink and Betty talked a number of times over the next couple of weeks.  Others from the Temple were involved in the meetings as well.  It was agreed that an evening meeting would take place in the basement of the synagogue and that Rabbi Fink, two Holocaust survivors, a former member of the Israeli Army, and three Temple elders would represent the interests of the Temple at large.  Prior to the scheduled meeting Betty also met with the offenders and their attorneys.

The evening came and we found ourselves seated around a large conference table in the basement hall of the synagogue.  Candles and flowers formed centerpieces and low lighting set a tone appropriate for the seriousness of the gathering.  Following the requisite introductions, explanation of the process, and other formalities, the stories began.  They flowed out – hesitatingly, in a rush, with tears and anger and fear.  Old memories were resurrected.  Details of childhood nights in the concentration camps rose to the surface.  Stories were told of the struggle to survive, to grow up, to make a life, to raise a family, despite the scars and the nightmares.  This night, for everyone present, there was no escaping what had happened fifty years earlier, in a foreign land, to those who had died and to those who had survived.

And the offenders had stories of their own, as young as they were.  The young man had run away from home two years earlier, and had been abused physically and emotionally by his stepfather.  He suffered from a significant hearing loss and a speech defect.  He was taunted at school.  After running away, he made his way to Alabama where members of the Aryan Nation took him in and where, for several months, he was indoctrinated in the ways of bigotry and hate.  His education completed, he returned to Iowa where he hoped to recruit and nurture his own community of neo-Nazis.  His success was limited.  His only recruit the young girl, not yet an adult, who fell under the spell of his perverse vision.  They came up with a plan to spread their message and draw attention to their cause.  The synagogue was a logical target.

And so the stories were exchanged and the gulf narrowed.  After nearly three hours of revelation, self-awareness gave way to awareness of other.  Faces of wisdom and suffering replaced those of the nameless Jews in the photo albums that the young man had been required to study daily at the Aryan Nation school.  And the Temple members, slowly at first and not in unison, came to see the two for what they were – lost, abused, and frightened children.  Early calls that the “book be thrown” at the two gave way to compassionate understanding that there must be a better way.

One of the Holocaust survivors asked the young man what he wanted from the Temple members.  He replied that he wanted to be forgiven.  Rabi Fink, who had been silent for much of the evening, spoke.  He said that in his tradition, the tradition of Abraham, Isaac, and Jacob, that forgiveness had to be earned and that, in this instance, nothing had yet been done to earn it.  He spoke of atonement and its importance to the Jewish community.  And he said, finally, that should the two atone for their transgressions that then, and only then, would forgiveness be possible.  The Temple members wanted the two to succeed; they wanted them to earn their way out of the guilt that had, for the first time that evening, overtaken them.

It was decided, following a dialogue befitting the tradition that the synagogue honored, that the two would each perform 200 hours of service to the Temple – 100 hours of service would be under the supervision of the Temple’s custodian and 100 hours under the supervision of Rabbi Fink who agreed to meet with the two weekly to study Jewish history and the history of the Holocaust.  It was also agreed that the Temple would help the young man find a hearing specialist, that he would have the Nazi tattoos removed from his arms, and that he and his girlfriend would each obtain job seeking skills, psychological assessments, and their GED’s.  Finally, it was agreed that a second meeting would be held in six months and that if the two had atoned in the manner agreed to that forgiveness would be given and that the Temple, through Rabbi Fink, would recommend that the pending charges be dismissed.

The young man and woman worked hard and exceeded the expectations of both the custodian and Rabbi Fink.  They gained confidence in themselves as the result of both their physical and intellectual labors, and from the formation of new relationships.  They passed their high school equivalency exams, secured employment, got married and had a child.  Rabbi Fink and the custodian were both invited to the wedding which the custodian was able to attend.  The Temple gave the young couple a wedding gift, and nearly five years later at a gathering of local restorative justice practitioners, supporters and police, Rabbi Fink spoke of his friendship for the two while holding back tears.

As for the system, Judge Glenn Pille, following the first meeting at the synagogue, continued the case so that the offenders would have time to complete the conditions of the agreement reached with the Temple members.  Six months later, at the hearing set for their guilty pleas, Judge Pille accepted the admissions of the two young people, heard the recommendations of Rabbi Fink and the custodian, and entered an order deferring judgment so that neither offender would have a record of conviction.

I am now taking an online class at the CJP called “Conversations on Restorative Justice,” where I am linked with restorative justice practitioners from North America and around the world.  We are asking why it is that the U.S. has the highest incarceration rate in the world, how our communities can be engaged in a dialogue with justice system professionals to look critically at what works and what does not, whose role is it to commence this dialogue and sustain it, and many other questions.

This story from my professional past, as a practitioner “in the system,” seems like a good case study from which to see the possibilities that restorative justice can offer existing justice systems, and begin addressing these big questions in our various communities and jurisdictions. [Fred Van Liew is the Director of Mediation Services for Employee and Family Resources in Des Moines, Iowa.  He also has a small consulting firm:  Restorative Justice Services.  He is a mediator, a lawyer, the father of five, and a part-time student in EMU’s Center for Justice and Peacebuilding.

Editor’s notes: A follow-up post on the photography for this piece is available at my personal blog. Also, a slightly different version of this story appears in the Des Moines Register’s opinion section. -BRG]