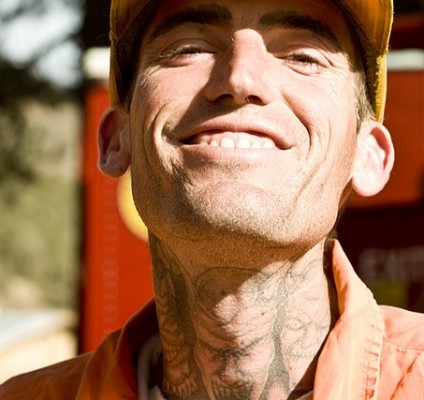 In an impassioned op-ed piece over at NationofChange, Christopher Petrella paints a troubling picture of the state of corrections in the United States and the paths which brought us here. Particularly troubling is what Petrella calls “the circuitous pathways between race, citizenship, containment, and profitability.”

Not only is the phenomenon of for-profit prisons becoming more common, in the midst of state budget crises across the nation, California is even suggesting that inmates pay for the services of the correctional facilities to which they’re being sent. How inmates from predominantly impoverished backgrounds would actually be able to pay for those services (they couldn’t) is part of the scheme. Even after leaving facilities, ex-offenders would then be financially indebted to the facilities, effectively shifting their “incarceration” to another form, economic. As Petrella point out, these people cease to be “criminals” in the eyes of the system and now become “consumers.”

But it doesn’t have to be this way. One of the most important aspects of restorative justice is its emphasis on rehumanization of all involved in instances of wrongdoing, criminal or otherwise. A privatized corrections system assumes an anthropology of literally captive consumers (structured economic individualism), whereas restorative justice assumes an anthropology of relationship and responsibility amidst community. Restorative approaches seek to heal the personal and social wounds done in instances of wrongdoing, whereas a privatized corrections approach seeks to extract capital to buoy the ailing state. Therefore, restorative justice  entails an implicit critique of systems such as privatized corrections but also the assumptions that underwrite such approaches at levels social, political, and economic.

So to use capitalist jargon, the “return on investment” of restorative justice is a return to pre-modern understandings of justice, rooted in embodied, accountable relational networks rather than abstract ideals and institutions. Such a return is well worth the investment.

[Brian Gumm is co-editor of the Peacebuilder Online blog and in his final month of studies at the Center for Justice and Peacebuilding, with an emphasis in restorative justice. He also blogs at Restorative Theology, where this piece was cross-posted.]