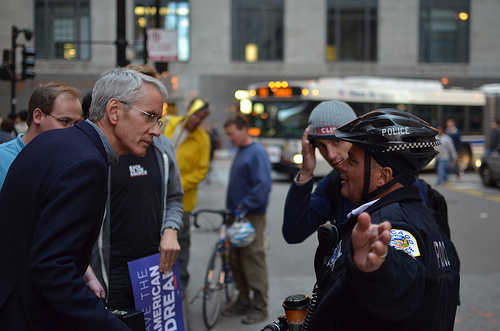 James Cavanaugh, a retired ATF executive, offers a good picture of the role of police in the #occupy movement in this op-ed piece posted to Tickle the Wire, a site focused on federal law enforcement.

Most notably, he encourages the “greatly underutilized” resources of police negotiators to form relationships and build trust with #occupy movement leaders, and to coordinate plans on a day-to-day basis. As Cavanaugh states, “It does not mean that the police will do everything that the protesters want, but it insurers that police will not act without first building trust and communication.”

This to me seems right on. Part of the problem I’ve seen in citizen coverage of police presence in the #occupy movement is the militarized/SWAT stance. Granted, there is also a problem with how many in the movement view and antagonize police (including in said citizen coverage), so it’s not like protesters are beyond implication. Less emphasis should placed on militarized police forces and more placed on building collaborative relationships with protesters, and a segment of protesters/citizen journalists should stop demonizing the police. Such moves could encourage an already mostly-nonviolent movement to stay that way, and keep them on course toward substantive change.

I part ways, though, with Cavanaugh’s final assessment, that the movement needs to “(transmute) itself into an occupy the voting booth movement.” Here he conflates “public” with “political” (in the governmental sense) and ignores how deeply corporatized government has become in the U.S., which is part of what the #occupy movement is protesting in the first place.

While I’m not opposed to voting per se, part of the genius of the #occupy movement is its inchoate awareness that the government is not the public savior, providing for all of our society’s needs. Indeed, as political theologian, William T. Cavanaugh (no relation to James, I assume) has shown, one of the problems with the contemporary nation-state is that very view of the state, sucking out all sociality from public life and arrogating it unto itself. The #occupy movement by its very praxis combats this. Some instantiations of the movement setting up ad hoc food systems, for instance.

Complexifying public space, restoring sociality to non-government-mediated public life, is one of the strongest forms of witness the #occupy movement has to the powers that be. Sure, go to the voting booth, but stay in the square. For good.

One of the topics we’ve covered on the Peacebuilder blog in recent months is the potential role of social media in peacebuilding. In particular, we have two alumni who are trainers of the Ushahidi conflict monitoring platform. I haven’t seen any conversation about how Ushahidi and the #occupy movement may intersect, but perhaps this #occupy/police relationship may have potential. If both movement leaders and police are contributing information to (via SMS texting) and monitoring situations on the ground via Ushahidi, the use of that platform could be part of the day-to-day review, which could follow an action-reflection model. [Brian Gumm is co-editor of the Peacebuilder Online blog and is completing his MA in Conflict Transformation at CJP this fall. He is also a licensed minister in the Church of the Brethren, with a special interest in the intersections of peacebuilding and theology, on which be blogs regularly at Restorative Theology.]

2 comments on “The occupation of policing social movements”