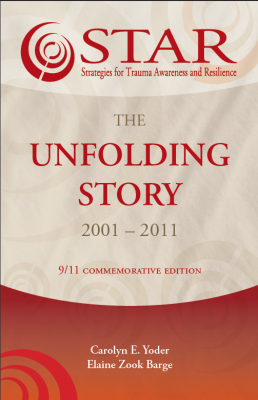 STAR was born from the ashes of 9/11. Who can forget the haunting images of that September day, the sky balmy, the smoke rising?

Soon after, Church World Service asked Eastern Mennonite University’s Center for Justice and Peacebuilding (CJP) to design a trauma training program for civil society leaders of all faiths whose communities, in the US or abroad, had been impacted by 9/11. Thus began STAR: Strategies for Trauma Awareness and Resilience, a week-long training program. Ten years later, this unique program continues to increase awareness of the links between trauma and cycles of violence. It provides tools for addressing trauma that go beyond the psychological, and include restorative justice, conflict transformation and spiritually/faith processes.

As the director of STAR for the first five years, I had the rich experience of facilitating over 50 week-long trainings with nearly 800 people from more than 60 countries. One thing that still amazes me is how a group of diverse individuals come together on Monday morning, strangers, and over the course of the week, forge a bond of human connection rare in our fragmented world.

Even though I marvel, I also know it doesn’t happen by accident. Two early seminar groups nearly shipwrecked, rocked by diversity, differences, and insufficient guidelines to handle it all. STAR staff learned as we went, consciously applying the processes and tools we were teaching to the way we structured the week and facilitated the sessions.

That’s what allowed us to navigate the rapids of the March 2003 seminar which gathered under the cloud of the impending US led invasion of Iraq. Pro- and anti-war divisions in the group mirrored the divide in the country. Mid-week, the war began. Tension abounded. But following the session on the links between unhealed trauma and cycles of violence, a person who supported the war posed a question to the group: “Did you notice that all of us who are offended by the anti-war sentiments are from New York? Look at this model,” motioning to the victim/aggressor cycle handout. “Do you think we support the invasion because we still are pretty traumatized by 9/11 and the economic after affects?”

The tension began to morph into thoughtful reflection. By the end of the week, people on both sides expressed gratitude for what they had experienced and learned. Two participants with opposing views said it well on the written final evaluation:

I came with an us/them mentality. Now I see what I must do: face the trauma so that it doesn’t come out in escalating cycles of violence. We all must work together if we are to be secure and live in peace.”

“I leave with a feeling of humility. I was challenged by my own feelings of tolerance/intolerance, and I grew through the process of facing a dark side of myself.”

Questions remain: Where will STAR go over the next ten years? How can it be made more available to larger numbers of people? How can it become more than a training, but processes embedded and lived in communities and organizations? In what new settings can it be applied: To the bitter political divide in the US? To citizen discussions in emerging democracies? To organizations struggling with diversity issues? To preventing violence in times of crisis?

We are grateful for the ecclesial bodies that sponsored STAR for five years through Church World Service:

Because of this support, STAR has made a difference around the world. More stories on the impact of STAR can be found in our 9/11 commemorative e-book: STAR: The Unfolding Story, 2001-2011.

[Carolyn Yoder – MA, LMFT, LPC- was the STAR director during the first five years of the program, 2002-2006, and is the author of The Little Book of Trauma Healing. She and her family have lived and worked in Asia, the Caucasus, East and Southern Africa, and the Middle East. She holds an MA in linguistics from the University of Pittsburgh and an MA in counseling psychology from the U.S. International University of San Diego.]

3 comments on “Sharing an anniversary with 9/11”