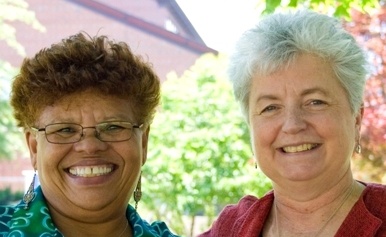 Coming to the Table, a program of the Center for Justice and Peacebuilding, seeks to heal the persistent wounds of racism related to the legacy of American slavery. The name of the organization harkens to Dr. Martin Luther King’s “I have a Dream” speech in which he states his dream that “the sons of former slaves and the sons of former slave owners will be able to sit down together at the table of brotherhood.” I am descended from slave owners and for the last four years have been working with the descendants of the people my family enslaved to bring about racial healing between our families and within their community.

When I began my quest to determine if my family had owned slaves, I initially focused on slavery alone and my family’s involvement in it. But when I discovered descendants of my family’s slaves, I quickly learned that racial wounds inflicted during the Civil Rights era were much more important to them than any scars left from slavery. They had been denied equal educational opportunities and had been terrorized for demanding change. If I were to do something to nurture healing, I would need to address these more modern wounds.

Unequal access to education is a legacy of slavery. Most slave owners barred their slaves from being educated because they thought education could lead to insurrection. After the Civil War, this reluctance to provide a proper education to African Americans continued. Many U.S. communities offered schooling to African Americans but in separate facilities with inferior resources.

This is exactly the situation that the descendents of my family’s slaves experienced. Betty and James Kilby attended segregated schools in Warren County, Virginia. After 8th grade, there was no local high school for them. Their father, James W. Kilby, sought the help of the NAACP in filing suit to open the local high school to his children. This was 1958, four years after the landmark U.S. Supreme Court ruling in Brown vs. Board of Education.

When the courts ruled in the Kilbys’ favor, the Governor of Virginia closed Warren County High School to prevent its integration. The Kilbys received nightly death threats on the phone. Their house was shot at and their farm animals poisoned. I cannot imagine the fear this created. Eventually the Federal court ordered the school reopened. Betty and James Kilby and 21 other African American children entered the school for the first time on February 18, 1959.

On learning of this history, I was at once proud of my Kilby cousins and ashamed of what Warren County and Virginia leaders had done to them. I searched for ways that I could help them heal from these wounds. My cousin James Kilby has formed a group called the Historical Education Movement (HEM) to honor his father’s work to integrate the local high school. He welcomed me to join and I worked by his side to petition the current school board to name the former high school after his father. We were not successful in that effort but we were able to convince the school system to allow us to host a commemoration of the 50th anniversary of the desegregation of the school in February 2009.

After James expressed an interest in hosting a “community conversation on race,” I applied for funding from Coming to the Table to organize such a dialogue. It included both African Americans and whites from the community, many of whom had experienced the desegregation events first hand. At the end of the dialogue, the group came up with an action plan to foster healing from those wrenching events.

Two important action items were to support erection of a historic marker at the school and to host a reconciliation event in the community. These were both accomplished with the dedication ceremony for the marker on June 8, 2011, as documented in local TV coverage: Unveiling a Marker that Commemorates Integration at Warren County High School – TV3 Winchester.

Through these actions, I believe some healing has begun. James, Betty, and I have shared our family histories. We have worked together to honor their father and their family’s bravery during school desegregation. We have reached across the racial divide, inviting others to join in dialogue. And we have become friends. In that, I see progress towards racial healing and reconciliation in our families and in the community. [In addition to the important work described here, Phoebe Kilby (GC ’04), is the Development Associate for Eastern Mennonite University’s Center for Justice and Peacebuilding.]