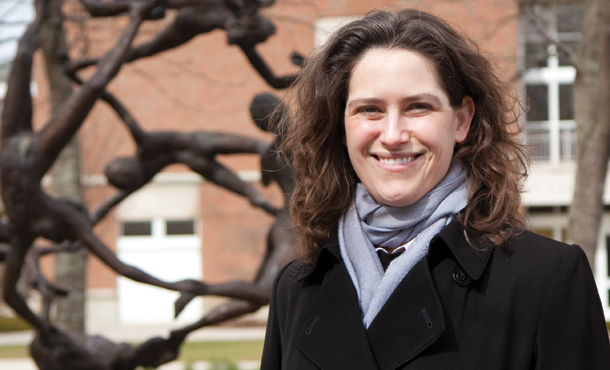 After completing a bachelor’s degree at EMU in 1996, Laura Brenneman joined Lutheran Volunteer Corps in Chicago where she was an activist for human rights through 1998. She was among delegations that visited the US Congress, advocating for a change in foreign policy in Latin America to reduce human rights abuses. She also organized delegations to Cuba and Guatemala, and she “went after Nike, The Gap, Disney, and other corporations with sweatshops around the world.”

Today, as a professor who explores the intersection between religion and conflict transformation work, Laura values the way CJP is willing to deal with the “tension” between the concepts of peace and justice. Pushing for justice tends to cause disharmony, at least in the short term, she says. “Folks who feel comfortable with the way things are will see you as an irritant if you point out that the existing structure is unjust, that oppression is structuralized.”

Laura is not the type to parse her words. She views the lack of access to health care for all US citizens as “scandalous,” adding that it is “egregious to be willing to throw away the most vulnerable in our society.” Laura supports activism more than engaging in it these days: “It takes a lot of time to be an activist, and I can’t do my teaching job and that too. I have to trust that other people are doing what I can’t do.” Concurrently with earning her MA at CJP, Laura earned a second MA at Associated Mennonite Biblical Seminary, followed by a PhD from the University of Durham in the United Kingdom.

In her classes, she never misses the opportunity to highlight “the economic disparity between the rich and the poor, and what systems lead us to this disparity.” But she also tells her students not to feel that the problems are so big, they are impossible to solve. “The trick is not to be immobilized by the fact that we can’t do everything or see quick results. I tell my students to start at the local level by breaking down the barriers in our own community between the rich and the poor and by working to get food, shelter and clothes to those who need it.” Laura is also working to establish restorative justice and mediation programs in the Bluffton area.