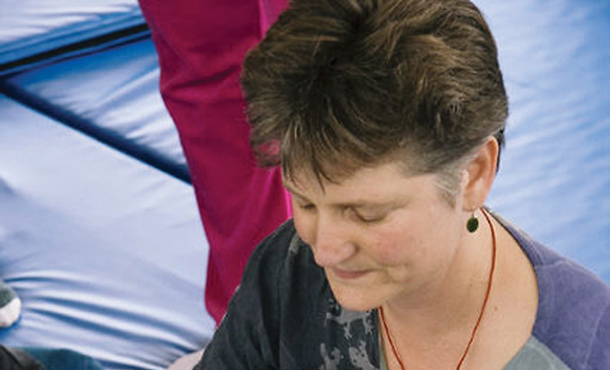 Janet Evergreen says she was encouraged to enroll in CTP in the late 1990s by her mentor, Louise Diamond, PhD, co-founder of the Institute for Multi-Track Diplomacy, founder of the Peace Company, and now founder and director of Global Systems Initiatives.

Janet commuted an hour from her home in Charlottesville, Virginia, and attended the Summer Peacebuilding Institute for three years.

She has had a lifelong focus on what she calls “heart connections”: caring for her and her husband’s biological, adopted and foster children; traveling to learn and teach holistic health; growing spiritually with practice and extended retreats; mind/body training, including continuum movement, yoga; and doing advanced bodywork such as cranial-sacral therapy, embryology and neuroscience. She also enjoys writing and publishing poetry about her life and adventures.

In 2004 Janet traveled to India. After teaching at the Dalai Lama’s Village for Handicapped Children, she met an Ecuadorian who had become a Tibetan Buddhist monk. He encouraged her to travel to Quito, Ecuador, to teach at a school called INEPE.

Since 2007, Janet has been the spiritual director for INEPE, a community school inspired by Paulo Freire’s principles to honor the whole child, their culture and spiritual development. The school educates 600 children at its main location and has outreach programs that reach over 1,800 indigenous adults from Amazonia and other remote areas. Janet spends two to three weeks annually at the school, teaching peacebuilding, mediation, bodywork and meditation. She has also made a commitment to help raise funds for INEPE.

“My training at EMU brought all my skills together and prepared me to teach internationally,” she told Peacebuilder. “EMU helped develop my faith to hear the calling, and respond.”

Janet closed her 25-year holistic healing practice in 2008, to allow “for a ripening of my learning and growing.” She says she needed the time to take better care of herself and to further explore her Tibetan Buddhism. For more information on Janet, INEPE, and Janet’s other activities, visit her website, www.janetevergreen.org.