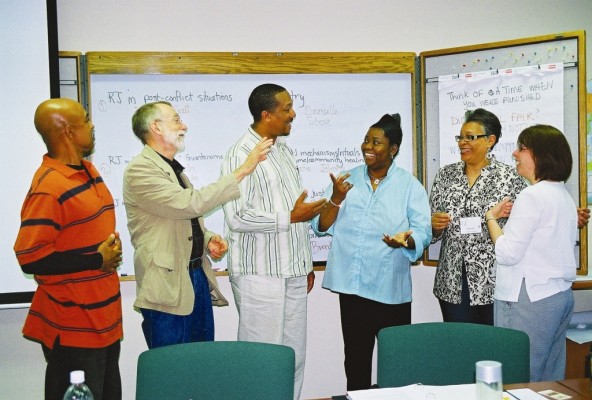 At age 65, Howard Zehr muses with friends and colleagues about retiring and spending more time on his photography and kayaking, but he shows no signs of slowing down. If anything, Zehr’s schedule seems fuller than ever as he mentors successors.

Zehr’s propensity to function “outside of the box” could be seen as early as his undergraduate days, when he was the first white to graduate from historically black Morehouse University in Atlanta. (He earned his master’s at the University of Chicago and his doctorate at Rutgers University.)

Zehr has made RJ presentations in 35 states and 25 countries. He puts high priority on: (1) responding to former students who want his help in launching initiatives and (2) accepting speaking invitations that might encourage a national shift away from harshly punitive judicial practices that feed cycles of violence.

In 2008, Zehr visited Brazil where he spoke to more than 500 people gathered at the law school of the University of Sao Paulo, the largest law school in the country. Zehr also addressed judges and law professionals at the Sao Paulo Court of Justice and gave two keynotes in an overflowing auditorium at the Higher (Supreme) Court of Brazil. He was a keynote speaker at the Congress of the Brazilian Association of Juvenile Justice Judges and at another meeting of justice professionals in Porto Alegre. About 4,000 people in total came out to hear him in these five venues. Zehr also was covered by Brazil’s media, including a guest appearance on its most-watched TV talk show. Zehr’s Brazil visit corresponded with the publication of a Portuguese edition of Zehr’s seminal 1990 book Changing Lenses: A New Focus for Crime and Justice.

In the fall of 2009, Zehr made his eighth speaking tour of New Zealand, a country that (not coincidentally) has restructured its juvenile justice system to put restorative conferences at its core, with remarkable results.

In 2008, Zehr applied a $30,000 award he received – part of the International Peace Award from the Community of Christ – to the Koru Project, which collected the experiences of CJP graduates in restorative justice.  Since 2002, Zehr has also received awards from the following: the Journal of Law and Religion; the Restorative Justice Association of Virginia (the first annual Howard Zehr award); the New York Dispute Resolution Association (annual Peacebuilder Award); and Prison Fellowship International (the Restorative Justice Prize). His longevity in the field and early book on the subject (Changing Lenses) has caused him to be dubbed the “grandfather of restorative justice.”

Zehr’s public work is partly supported by an EMU endowment fund set up by Kathryn and John Fairfield, which provides “faculty release time” for disseminating the principles of conflict transformation more widely in the world.