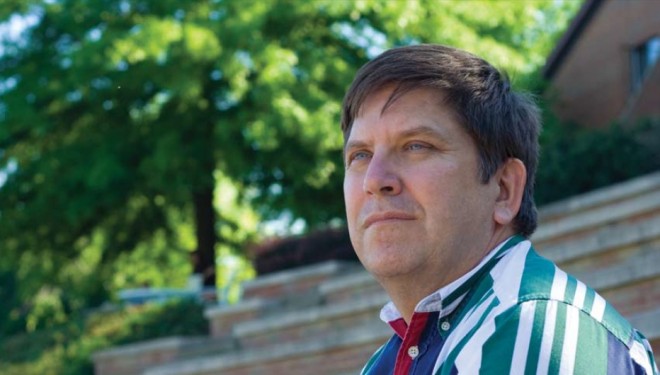 I was awed and humbled by my 2008 Summer Peacebuilding Institute (SPI) session at Eastern Mennonite University (EMU) where I met, studied, and reflected with students from 46 countries. I spent most of my week with a group of people who share a unique connection to historic slavery in the United States. Almost all of us are descended from the enslaved, the enslavers, and the slave traders; all are committed to confronting, and helping, people – ourselves and others – heal from the legacy of slavery.

In this special SPI session, called Coming to the Table, I joined 15 others to consider and mourn the lingering damage we have inherited – collectively and individually – as a result of slavery. We also explored potential paths toward healing. It wasn’t my first Coming to the Table experience. My first was in January 2006, where I first met white and black descendants of Thomas Jefferson and other families connected to historic slavery. One of the Jefferson descendants was David Works, whose love and transparency was evident even then.

It was more palpable this time, because David had recently experienced severe trauma and was clearly on a healing journey. On December 9, 2007 – just six months before coming to SPI – David’s family was leaving their New Life Church in Colorado Springs when a 24-year-old man went on a rampage and began shooting people in the church parking lot. David and his wife Marie lost two beloved daughters – 18-year-old Stephanie and 16-year-old Rachel – in this attack. David was also shot twice by the gunman.

David shared with us that he didn’t know that Stephanie had been shot and died until he was in the recovery room after his own surgery. Later that night while in the ICU he learned that Rachel had succumbed to her wounds. “As a father and as a Christian, I was trying to sort this through in my mind and my heart,” David said. “I remembered the snail image of the victim/oppressor cycle (a trauma-healing graphic that was introduced at our 2006 Coming to the Table session), and I told myself: ‘I can choose to lose my mind and go down the path of anger and retribution, or I can use the tools I’ve been given and my theology to find something good in this, to break the cycle. I can use this to teach the rest of my family.’ It will not honor Stephanie and Rachel to be angry and bitter about this.” *

David said the grief his family members are experiencing is messy, unpredictable, and may never go away. It is unique to each individual. Yet David, Marie, and their two remaining daughters – 19-year-old Laurie (Stephanie’s twin) and 12-year-old Grace – chose not to go to a place of vengefulness.

Less than a month after the shooting, David and Marie agreed to meet with the Murrays, the parents of the young man, Matthew Murray, who killed their daughters and injured David. In a pastor’s office at the New Life Church where the shootings occurred, the four parents hugged and cried together. Earlier the Murrays had met with the families of two other victims of Matthew’s shootings at another church site. Afterward the Murrays issued a statement: “Thanks to God, these remarkable families and their pastors and churches, healing and reconciliation have begun.”

As David showed us by his example, a key component to healing is understanding trauma and its potentially infinite, destructive cycles. Natural responses to trauma include reacting with aggression and/or feeling like a victim. The “survivor/victim” response can result in a cycle of physiological changes. Instinctual reactions include fight, flight or freeze. We feel shock, injury, denial, anxiety, and fear.

The “aggressor/enemy” response can result from seeing one’s self as victimized. We may feel shame and humiliation. We can develop a good-versus-evil narrative and dehumanize and demonize the enemy. If I eliminate the human qualities of those who harmed me, revenge is easier.

We may justify using violence and see it as redemptive. We may decide to pursue our own needs, even at the expense of others. There may be social and cultural pressures to do so. We act in selfdefense and believe we are restoring honor and justice.

Healing and reconciliation require us to break out of these cycles and pursue a different path. The path to reconciliation – either individually or as a community – includes truth-telling (facing all the facts within their historical context and considering the impact on, and feelings of, both victims and victimizers), justice (acknowledging the harm and taking action – agreed upon by the victims and the victimizers – to repair it), compassion (accepting one’s self, having empathy for “the other,” and forgiveness), and peace (relationship-building, communication, understanding).

As if hearing David Works’ story were not enough, I heard a second story at EMU last summer that provided another living example of the ability of people to experience ultimate harm and grief and to choose grace and forgiveness on their path to survival and healing.

Angelina Atyam from Uganda spoke at a luncheon about the kidnapping of her 14-year-old daughter, Charlotte, by the Lord’s Resistance Army, a rebel guerrilla army fighting against Uganda’s government. During her nearly eight years in captivity, the daughter gave birth to two children fathered by her captor. During this period, Angelina visited the mother of the rebel commander holding her daughter, came to understand that this mother had lost many members of her family too, and extended her hand in friendship and forgiveness. Now that Charlotte is free, Angelina is focusing on caring for her grandchildren and helping her daughter to resume her education.

At Coming to the Table, we recognized the challenge of comprehending collective trauma (such as the holocaust of WWII or the transatlantic slave trade) because the magnitude is on such a large scale. Getting a handle on healing from such large-scale trauma can feel overwhelming and unlikely. Yet we participants in Coming to the Table were committed to using the model of facilitated dialogue, study, and reflective encounter to bring together people who are normally isolated from each other. Coming to the Table is an effort to identify the harms of slavery and its aftermath and work toward healing.

As for other summer classes taking place at the same time as Coming to the Table, I had heard that EMU has international appeal, but I figured that meant a small percentage of students come from outside the United States. One morning at a “gathering celebration” where all 105 of us students joined together for breakfast and announcements before beginning our various classes, each of us stood and shared our name and where we are from. I wrote down as many countries as I could. I didn’t catch them all. If you can resist the inclination to skip through the list in the next paragraph and actually read the names of each country you’ll get a sense of just what an international gathering this truly was.

At EMU’s Summer Peacebuilding Institute, all are dedicated to serving others with an emphasis on peace and non-violence. Students come to learn and to share, exchanging wisdom and energy.

I was, and remain, in awe. I am grateful to have been part of this transformative learning experience. [Thomas Norman DeWolf is the author of Inheriting the Trade: A Northern Family Confronts Its Legacy as the Largest Slave-Trading Dynasty in U.S. History (Beacon Press, 2008), a book about his family’s quest to face the true history of their ancestors and the founding of the United States. DeWolf and several of his cousins now tour the country speaking about our nation’s desperate need for honest dialogue and healing. For more information visit www.inheritingthetrade.com. DeWolf also participated in the making of the documentary “Traces of the Trade: A Story from the Deep North,” which first aired on PBS in June, 2008. For more information visit www.tracesofthetrade.org.]