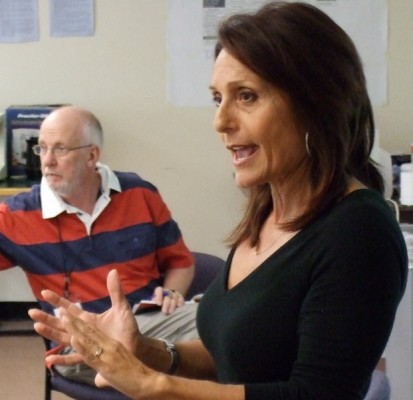 From her base as Baptist chaplain at American University in Washington D.C., “Marinetta” Cannito Hjort, MA ’05, has been flying frequently to Mexico and her home country of Italy to promote judicial reform along restorative justice (RJ) lines.

On invitation of USAID-Mexico and a partner organization Pro-Derecho, Hjort headed to Mexico for three weeks in the fall of 2006, after a number of Mexican states reformed their judicial and legal processes and showed themselves willing to use some restorative justice processes.

“My task was to train people working in the judicial system, along with some leaders of human rights organizations and other community groups, on the principles and processes of RJ,” said Hjort. “The ultimate goal was to inspire and empower all sectors of the community to collaborate to prevent crime and create a culture of change.”

Hjort was a featured speaker at USAID-supported conferences in various settings. She addressed law professors, magistrates, judges, and attorneys. She conferred with the president of a university, the president of a tribunal and state attorney generals. She also gave press conferences and interviews for television and newspapers in all the states where she traveled.

Hjort returned to those two states in Mexico in January and March 2007 to participate, as a speaker and a panelist, in conferences celebrating the judicial reforms in both states. Each conference was attended by more than 500 people. She sought to educate the public and the media on the vulnerability of victims, the laws that can help protect them, and the strategies for crime prevention.

In another human rights effort, Hjort went to Mexico City in October 2007 to train leaders working on behalf of rights for indigenous and immigrant groups.

Hjort also works with the anti-mafia movement in Sicily, Italy, training some members of a Sicilian group in RJ. As part of this work, Hjort has done research on RJ as a potential tool for social change in the context of a protracted conflict, and the challenges posed by organized crime to RJ practice.

On her home turf in the U.S. capital, Hjort regularly gives RJ presentations at the Washington Semester Program and the School of Public Affairs of American University.