24 February 2019
The twenty days that we have been scheduled to stay in Beit Sahour are concluded – we depart this afternoon. This is the longest amount of time that we’ve been headquartered in one spot, and some would say it’s been just long enough to start really digging in and adapting to the lifestyle here before being uprooted. That’s the nature of this semester’s journey. We hop from place to place in bursts, taking in the environment, natural and human, and the stories, old and new. Sometimes we linger enough to reflect, and sometimes we must process on the go as we shift into what can seem like one entirely different cross-cultural after the other. Each time, a piece is added to either clarify or complicate (usually both) our understanding of the puzzle that is the Middle East, with all of its beauty and struggle.
This final week in Palestine has had many puzzle pieces to contribute to our experience. On Sunday morning, our group drove out into the wilderness to begin our hike to Jericho, the lowest city in the world and debatably the oldest. The hiking was a welcome change of pace from the classroom studies and lectures that we were becoming accustomed to. The weather was wonderfully sunny and warm, perfect for the basking, wading, and exploring we did at the spring we came across. This spring morphed into a pretty ancient aqueduct that we followed for the next several hours. Some of us decided to really test the reliability of our WaterBasics filter bottles and took advantage of this available running, but not particularly translucent, water source. Thankfully, no adverse effects tarnished our time of appreciation for the gorgeous landscape throughout the rest of hike. When we reached Jericho, it was now more than comfortably hot – perks of being the lowest city in the world. We spent the late afternoon visiting Zaccheus’ sycamore tree, doing some downtown meandering, and hunting for cheap snacks before taking a bus back home. 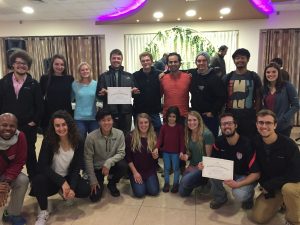 At first, I believed the Monday group had it the roughest; the Arabic final exam was that morning.  The rest of the day was pretty open besides an afternoon lecture and an evening soccer game. The lecture was on the influence of international funding in the occupation and the USA’s place in that. The game was a challenge issued to our whole group by the Beit Sahour city league girls team. These were high schoolers, and despite our best efforts, they beat us 3-1. Johnny, our very passionate de facto coach, kept us entertained with his yelling how bad we were from his sideline perspective.

“She’s not your grandmother! Don’t ever let her do that to you again!”
“I am going to kill you all after this!”
“That Austin… all he cares about his hair.”
A rematch was scheduled for Friday.
It was then that I learned that I was not alone. A wave of sickness had rippled throughout our numbers, displaying the same symptoms at around the same time. We have our suspicions. Remember that aqueduct from 36 hours previous? Trust us, they said. The filter will protect you, they said.
Throughout the remainder of the week, there were many more speakers. With the Badil organization, we had a pretty uplifting discussion concerning finding creative solutions to the plight of Palestinian refugees. We visited the Tent of Nations, a olive tree-planting organization whose project leader offered an extremely insightful message of non-violent 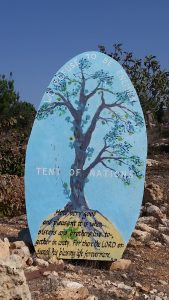 resistance to the occupation. Its mottos include “We Refuse to Be Enemies” as well as “We Refuse to Be Victims”. Those of our group who were healthy even helped clear some bushes for future planting (while the rest of us sat pathetically in a cave). From the organization of Kairos Palestine, we heard about the call to Palestinian Christians and perspective of a religious movement in resistance. The energy and intention behind all of these different groups and all of the various approaches to the problem is most empowering. So much of what we’ve been seeing and hearing is only angering, saddening, or both, and the exposure to some strong forces of hope has given us something to help bear the weight of the reality here.
Two additionally positive notes to close this week on: First, EMU won the rematch 5-0, and Johnny did not kill us all. Second, we had a lovely farewell dinner party on Saturday night with our friends from ATG. It also served as a graduation of sorts from Arabic studies. The food was fantastic, as usual, but the live music was perhaps even more spectacular. What is reportedly one of the best bands in Palestine jammed out on the oud, bouzouki, and kanun as we did some mightily awkward dancing. That’s a good memory to end our stay here with – the memory that beautiful Palestinian culture can still shine through the conflict that has overshadowed so much of its identity in the world’s eyes.
Next stop: Israel, the other main player in this conflict. What stories will we see and hear there, I wonder? How will we be able to reconcile them with that which we now carry with us?
Stay tuned.
-Silas Clymer