After leaving the hustle of Mexico City, we were pleasantly welcomed by the more relaxed atmosphere in Puebla. As soon as we arrived at the Spanish Institute of Puebla, we had a brief orientation to the Institute, then if was off to our new host families. In contrast to our host families in Guatemala, we were 2 or 3 students to a family. This helped to ease the transition, and took some pressure off of our Spanish skills.

END_OF_DOCUMENT_TOKEN_TO_BE_REPLACED 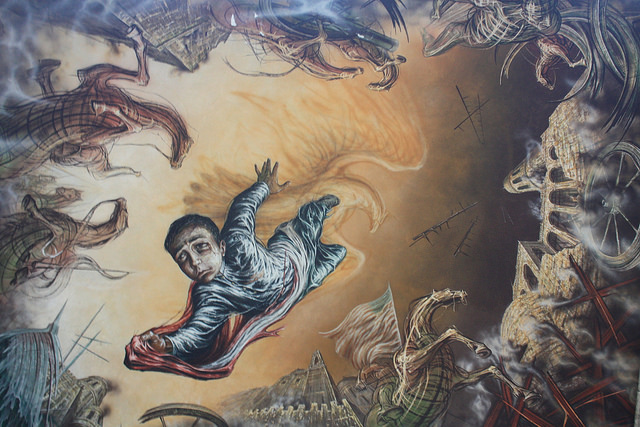 As the plane began to descend we saw just how vast and colorful Mexico City is. Some were sad to have departed from their lives in Guatemala City, others were ready for a new adventure, but no one knew what to expect here. We arrived at a Quaker guest house, Casa de Los Amigos, exhausted and hungry from our long expedition to Mexico City. We were welcomed with warm hospitality as we found that we would be eating chili and corn bread, a more westernized meal, after eating beans, eggs, and tortillas for the past couple of months. That evening, some went to the revolution monument that is lit up with red lights at night. We watched a beautiful fountain of lights while being serenaded with typical music of Spanish guitar and flutes. We all were content with not having a strict schedule there, which allowed for a better transition to Mexico.

The next day we explored the city and all of the locura that it embodies. While walking down the street we saw an entertainer with floating balls, and a flash mob take place. We made our way to the famous Zocolo where we visited the Cathedral and the Palacio Nacional. The Palacio Nacional is filled with murals of the famous artist Diego Rivera. We had a guide explain to us the rich Mexican history from Mesoamerican times until the time of the Revolution, that Diego Rivera incorporated in his paintings.

After the palace, we ventured up seven flights of stairs to a restaurant where we got to see a great view of the Zocolo and taste the picante of authentic Mexican food.

We then took public transportation to Coyoacan, birthplace of Diego Rivera’s wife and also famous painter, Frida Kahlo. Some decided to stay and visit her home which is now a museum of artifacts from her life. Others went to the plaza where there was un chorro of people relaxing and enjoying their weekend.

I personally decided to go to the Frida Kahlo Museum. After doing several projects and learning about her, she has become an inspiration for me. Never in my life did I think that I would get to go to her Casa Azul in the corner that I first learned about in 8th grade, and yet there I was, filled with excitement. In a time when women didn’t have a say, Frida spoke her opinion and went against the current. She experienced so much pain in her life from Polio, and an accident she had when she was a teenager. She expressed this pain through paintings, mainly of herself. She embraced her suffering and found a positive outlet to express it, which is something admirable. She was an outspoken woman of courage and talent and I am pleased to say I got to cross something off of my bucket list by going to visit her house. and learn a little history about where famous events took place. One night we dressed up and went to see a Baile Folklorico, or a folkloric dance in the Palacio de Bellas Artes. We watched in awe the women in their colorful traditional dresses accompanied by men in their sombreros float around the stage as they tapped and danced to Mariachi music. None of us wanted to blink in fear of missing out on the amazingly beautiful dances.

After four wonderful days in the city, it pained us to leave, but we were ready for our next adventure in Puebla, Mexico. 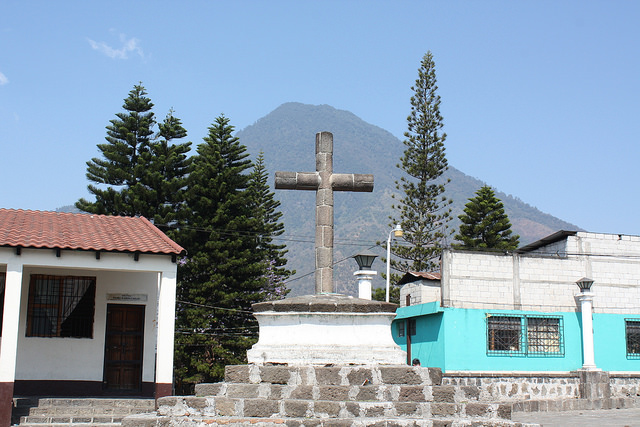 “Like doing death-penalty cases in a traffic court setting,” one immigration judge said in testimony before Congress about the job.

This is hard to read and I felt like I might cry, especially after meeting families that have been in these situations.  There are so many stories like this one I’m sure.  So many families broken apart.  I can’t even imagine but that doesn’t mean I’ll stop trying.  I don’t want to [return home and] act like I don’t know what I do know.”

On February 28, our group left our Spanish classes early to get a head start on our weekend trip to Lake Atitlán.  After a warm and humid bus ride, we stopped at a cooperative called Campesino Committee of the Highlands.  While walking to the storehouse, Rebecca was happy to see a group of children playing soccer in an open building with a sign saying, “Se prohibe jugar fútbol.”

Once inside, many of us were surprised to see the logo of the cooperative superimposed onto chalkboard-sized, professionally printed tarps with Hugo Chavez’s face and the phrase “Continuemos la lucha!”

END_OF_DOCUMENT_TOKEN_TO_BE_REPLACED

On Friday, February 14th we travelled to Tikal for our second weekend trip in Guatemala. We had a really early start to the day – we needed to be up and ready to leave CASAS at 4:30 a.m. so we could catch our flight to Tikal at 6:00 a.m. The flight to Tikal took us about 45 minutes and we arrived safely in our 30 passenger propeller plane. From there we went straight to the Tikal National Park where we toured the Mayan ruins. We hiked to five different sites and our tour guide gave us some background history about the ruins along the way. It was really fascinating to see these ruins and to learn about the Mayan culture in such an interesting place.

END_OF_DOCUMENT_TOKEN_TO_BE_REPLACED Last week we heard from two speakers, the first speech was focused on Neo-Pentecostals and this movement involves a new Pentecostal form as opposed to the old.  Neo-Pentecostalism originated after the strong earthquake in 1976 when destruction occurred in Guatemala City, and churches and communities came together as they saw hope in the Neo-Pentecostals. During this time the country became more conscious of God, and the Neo-Pentecostal churches grew from 2% of the population to nearly 40% today.  The second speaker was Rafael Escobar, who is the Dean of the Anabaptist seminary, Semilla, where we are studying Spanish. He discussed the Mennonites in Guatemala. The discussion revolved around the distinctives of Anabaptists including peace and non-violence, which is different than the Dispensationalist theology of many other Guatemalan churches. Throughout his speech he encouraged us to explore how we express our faith, where we come from and how we should apply this to our calling here.

END_OF_DOCUMENT_TOKEN_TO_BE_REPLACED

On our first adventure outside of Guatemala City, we took a three hour bus ride that was split in half. Our first stop where we ate lunch was the Mayan ruins of Iximche. This was an interesting place to see because prior to this we have been learning about the Mayan people. During the week we had visited a Mayan museum close to CASAS where we were able to see and hold artifacts that were 1,500 years old!  We also learned about the Mayan cosmovision which embraces the balance of nature, and their precise calendars which accurately correspond with astronomy.  While we took a walk around the ruins we were able to see people practicing their Mayan prayer ritual. In the ruins we saw the ancient Mayan soccer field where people played using their elbows and chest to hit the ball. This game was the deciding factor of who would be sacrificed to the gods at the end of the game. We then took a winding road through the beautiful Guatemalan mountains to arrive at our destination, Chichicastenango. In this town we focused our learning on Mayan culture, markets, and Catholicism.  We were able to meet with a women’s widow co-operative that helps them sustain themselves and their families by creating textiles as their sole income. This opportunity allows them to work with an organization specifically like Ten Thousand Villages who are able to buy their products and allocate fair prices. In this co-operative there are twelve women from the K’iche village. This was a fascinating experience to be able to buy items from this co-operative and meet with the women who made them. We also had the opportunity to visit another co-operative called Ruth and Naomi. It was amazing to see that there is hope for people in small villages to make a living for themselves. END_OF_DOCUMENT_TOKEN_TO_BE_REPLACED