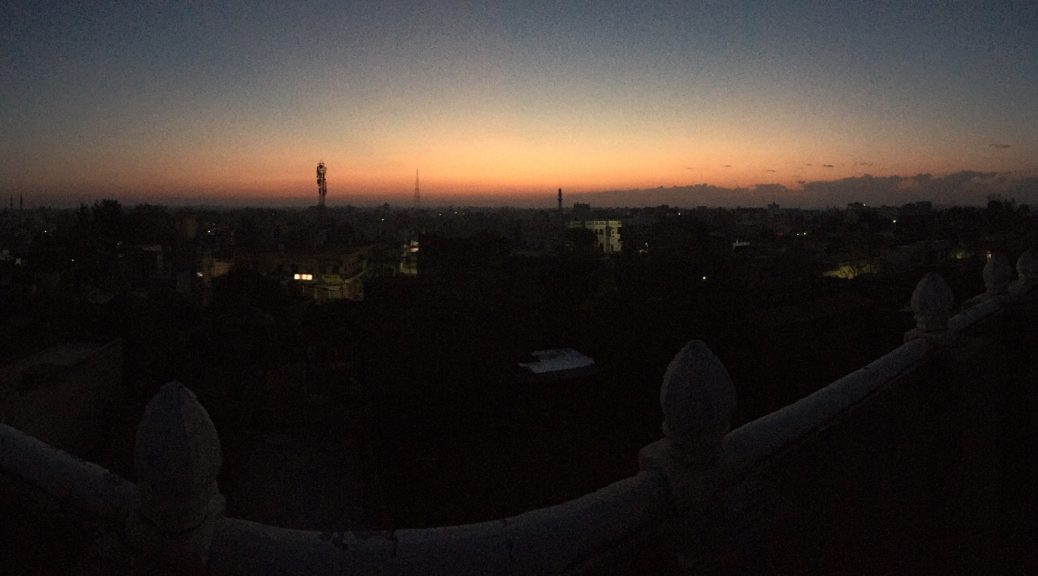 Location: Roof of a Haveli in Mandawa, Rajasthan, India. 6:15 am.

The sound of music drifts through the brisk March air towards me from some unknown source. The city seems still and sleepy. Occasionally, I catch the moo of a cow and the chirp of a bird. Audible all around me is the sound of street cleaners with their handheld straw brooms as they push large clouds of dust and piles of trash.
The sun rises slowly from behind a layer of thick haze in the distance. The haze causes the sun to cast a gradient of pinks, reds, and oranges onto the sky. Slowly, the city awakens. The sound of distant horns begins first, slowly increasing to shatter the stillness with their harshness. People are visible now in the streets, leaving their shops and homes to begin their day under the pale orange light.
All around me, I see a mass of temples, havelis, and buildings in various states of disrepair. The honk of horns increases still, now interposed by humorous jingles. A bus rumbles slowly down the narrow street, struggling to turn the sharp curve of the road as a stream of motorcycles and mopeds pass it on either side. The sun has arisen and in response, the city has awaken. 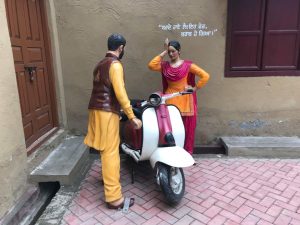 India is well known for its hectic traffic and rightfully so. My scariest experience on wheels, however, did not occur on the roads of India. It happened while being pushed around in a wheelchair at a simulation of a Punjabi village.
Train stations create an environment in which you need to stay alert; it seems anything can happen in the chaos. With 32 students, the shuffle from the train to our next mode of transportation adds to the discombobulation. As we rushed through the station after a long train ride, around 9pm, fatigue from a bug being passed around drained my energy to a critically low level. I struggled to put one foot in front of the other and could barely see over my backpack. We approached a curb and I sadly did not see the piece of gravel that my foot was about to land on. Little did I know that my next step would impact the rest of my trip.
My ankle bent at an unnatural angle as the extra weight on my front and back made me unable to recover as I normally would. I saw spots and did not know how I would make it to the bus. The next 20 minutes are a blur. I remember fighting off a desire to pass out and drift into a world of sleep where I could ignore the pain. I told myself, you’re just tired you’ll be better in a few days, but, a few days later, I found myself being pushed around in a wheelchair by a maniac, Yelisey Shapovalov. The name still sends the sensation of falling surging through my gut. As we explored the “authentic Punjabi experience,” the claim still causes skepticism, I was pushed up hills, where my caretaker would let go just long enough to cause panic. My wheelchair, with me still in it, was picked up and carried over curbs. By the end of the trip, I was convinced I would teeter off either the edge of the wheelchair or my sanity. Fortunately, Yelisey only wanted to incite trepidation and not true fear. We watched the acrobats, dancers, and warriors twirl in the grass, dazzling us with their heritage. I longed to have the physical health to move as they did. Despite my ankle and the frustration it brought, I made it through Sadda Pind as intact as I arrived and enjoyed the spectacles of the “authentic Punjabi experience.”

I had anticipated our time in Mussoorie since the start of our travels and the day had finally come. Mussoorie is situated in the Himalayan foothills at about 6,600 feet. The ride up to Mussoorie was wild! We climbed on winding roads for about an hour and as we got higher the roads got narrower and steeper. As we drove up, we could see the city of Mussoorie built into the mountainside. I was in constant awe of the view and atmosphere. 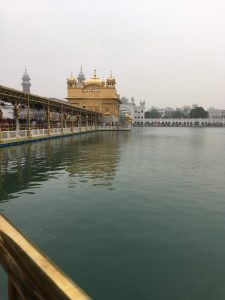 We eventually got to Doma’s Inn which is owned by our guides family. The Inn is quite colorful and represents or guides well. It is small but unique in many ways, and includes a sweet view down to the slopes below Mussoorie. After getting situated here, a group of us took a walk. This was a cool loop that gave us views of the surrounding peaks and valleys. The walk gave us a better understanding of how steep the roads are in Mussoorie. We were able to see tall evergreen trees, monkeys and some small shops. Unfortunately, it was hazy and so we could not see the Himalayas. Even with this being the case, I continually said “unbelievable” on the walk. It is exciting to have finally arrived in Mussoorie. This is the place where our leaders lived and/or grew up in, and we are eager to have them share their home city with us. I look forward to understanding the culture here as well as going on hikes to try and see the Himalayas. 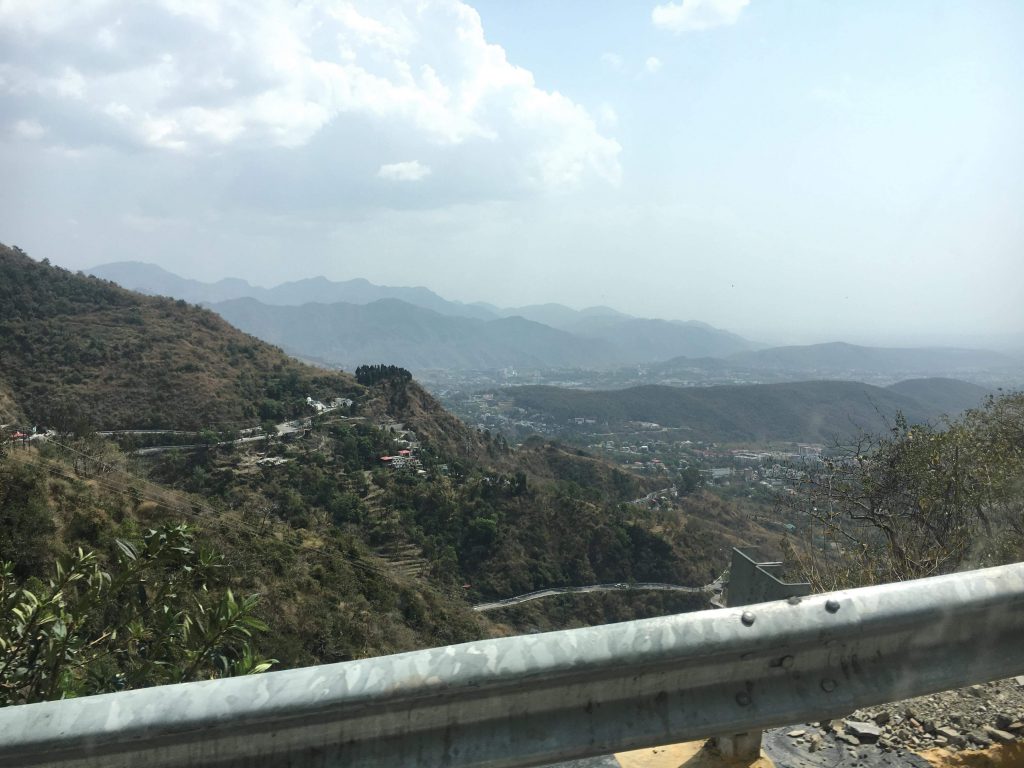 I do not mind walking for coffee
and finding shops within the clouds of trees
and sweating in the cold. All for coffee.

I say to myself, just Keep going.
Natives with impressive lungs pass me breathing
steadily, but I have to stop moving.

With struggling breath I look down and see
tiny specks that I know are bigger than me.

Do I really need coffee?
My energy level says yes,
but my unmoving feet know best.