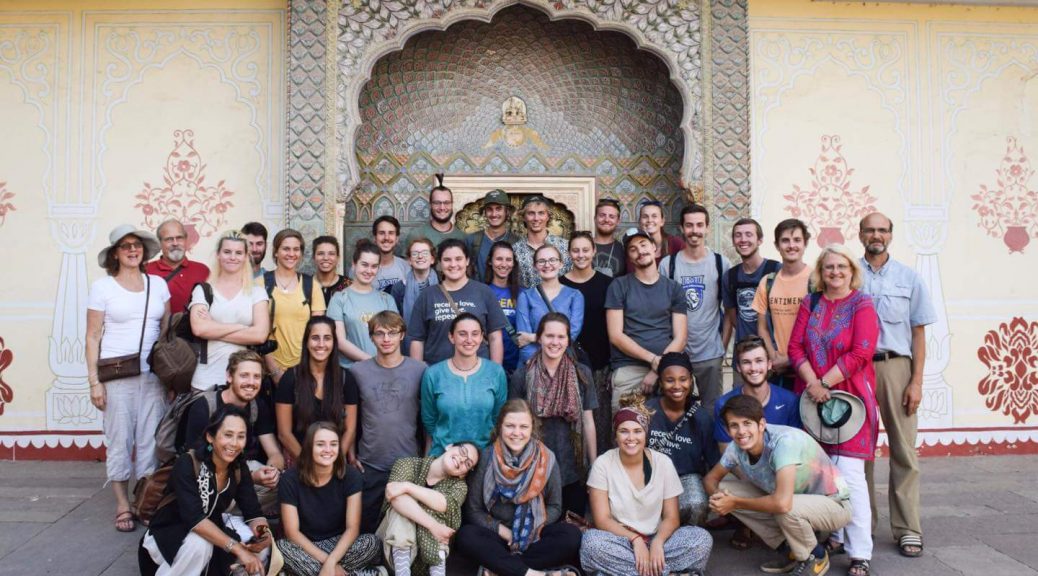 El Classico, or A Day in Jaipur

An account of perhaps the most comically representative full-day experience of our entire trip. It all began with a man wearing a straw hat and a winning smile who stepped onto our bus that morning and invaded our lives forever. “Goodmorningmynameis[incomprehensible]butyoucancallmeJiJi––” he said breathlessly. “It’s a good thing you have me, because I’m the best tour guide in Jaipur! Here are the things Jiji will show you today.” [Winning smile] Emerson and I looked at each other – it was clear this day was going to be something special. 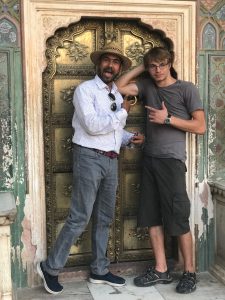 An endless stream of burbling chatter from Jiji kept us entertained (“I would be a perfect human being, except I’m a couple inches too short – look, there’s a lake!”) until we pulled up at the Amber Fort ante-parking lot, which is kind of like an antechamber except less like a waiting room and more like a holding tank for tourists. “Jiji.com!”* said Jiji cheerfully. “Also, we aren’t actually at the fort yet, so we need to use jeeps to get there. There’s plenty of room!” We proceeded to smush ourselves into as few jeeps as possible – all the while being hounded by a bagpipes man trying to sell us something, ostensibly bagpipes – and suffered a 15-minute ride, avoiding dogs, hawkers, and elephants alike, before arriving at the actual fort.

After the typical scuffling involving student I.D.’s and cost bartering, while continuing to avoid the trinket-sellers descending like birds of prey, we finally arrived inside the palace. Fast forward through a half-hour lecture, concubine passage adventuring, and several more references to Jiji.com, and we’re on our way back down the mountain for lunch. After the customary 45-minute traffic delay, we arrived at a relatively normal lunch buffet – to be one of our last average experiences of the day.

Just as our group began heading into the dangerous realm of pleasantly-full post-lunch doldrums – nap time, in other words – Jiji leaped up energetically and joyously announced two items: 1, We are about to watch a traditional authentic (two of his favorite words, coincidentally representative of tourism in India) Rajasthani puppet show, and 2, We have only seven more things to see today [ticking off on fingers, his smile now beaming comically ominous overtones]: A jeweler, a linen warehouse, a ceramics store, Jantar Mantar, and the city palace – “Then home, and then to bed!” he laughed.

And so we went, trudgingly and grudgingly – although not before our puppeteer tried to sell us some of his puppets (again, representative of Indian tourism). 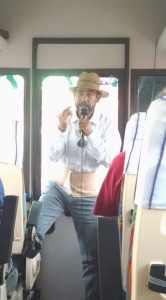 We piled into our deluxe air-conditioned coach, then piled out into the upstairs workshop of Jiji’s friend, the jeweler (“I never bring other tourist groups here!”) for an admittedly interesting glimpse of behind-the-scenes jewelry-making…but not too long of a glimpse, lest we forget about the chance to shop for jewelry in the store immediately downstairs.

The cycle continued. We piled into our deluxe air-conditioned coach, newly laden with shopping bags and jewelry, before piling out into a linen-printer’s workshop for a short but interesting demonstration. And again, we were led into the adjacent linen store, returning after a short while to our bus with a few more additional pounds. Deluxe air-conditioned coach…ceramics demonstration…shopping…coach…and then, suddenly, we are standing outside the most famous astronomical observatory in India, Jaipur’s Jantar Mantar. Due to our afternoon excursions, we barely make it to Jantar Mantar before closing time, and we are in the midst of the typical entry-fee scuffle when four military jeeps screech to a halt outside the park entrance. A dozen serious-looking men with rifles jump onto the street, lock down the area, and shuttle all 38 of us into the park before you could even say “Namaste.” 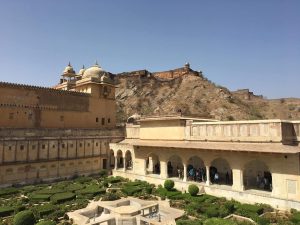 “Important political visit,” grunts the entrance guard when Jiji asked him. Well, that seemed safe enough, so we begin walking towards the world’s largest sundial, when all of a sudden, Hillary Clinton glides through the park entrance, less than 50 feet away from us. Madness and hilarity ensue, as the absurdities of the day begin to catch up with us, and the anciently grand astronomical instruments lay forgotten.

Though our day was far from over, I will end my narrative here, at the pinnacle of our confusion. These types of overwhelming days, where the strange and familiar swirl together in intensely chaotic ways, are the norm, not the exception, on cross-cultural. Responses to days like this vary. Sometimes we laugh; sometimes we cry. Sometimes we ruefully admit to each other, “India wins…again.” Sometimes we lash out in defensive anger. Sometimes we simply shake our head in bewildered wonder. And sometimes, when we don’t know what else to do, we give each other knowing smiles and say, “Jiji.com.”

*We don’t actually know why he was such an advocate for Jiji.com, considering the domain belonged to a Chinese app store, but we are guessing he thought it made him look cool.

Observation of Space –  A Compilation of Sporadic and Mismatched Thoughts

Bustling city. Dusty streets full of rickshaws and cyclists, tour buses and zippy little cars. Snack shops spotting the edges with the typical strips of chips and peanuts and assortments of odd Indian Chex-mix of sorts, butter cookies and other couple-of-rupee treats. Stray dogs picking through bits of trash, the occasional cow confidently making its way down the street. A cricket game down a side road drawing in a  crowd of young boys and spectators. The chorus of honking.

Arriving in Agra just an hour before, the novelty of a new city drew me out of my hotel room and into the color and chaos of the streets. Because what’s better than a walk after sitting on a bus all morning?

“If we walk down this road for about a mile, we’ll reach the Taj,” my trusty navigator, Abigail, told me. So we turn off the main road down a side street, shifting our gaze from the bustle of the busy street to the sight in front of us, an entirely new type of bustle. The road narrowed, only fitting cycles or small cars, carts or cows among the people walking through. A small school to the right in a block cement building, kids in uniform leaving in little chatty groups, hand-in-hand with a parent or on the front seat of a motorcycle between the arms of a brother or father. Women in bright saris sitting in doorframe, men standing in small clusters on the side of the road.

Meandering down for some time, my eyes never knew quite where to focus. Do I stare back at the wide eyes of the small girl playing in the street, at the young man who turns on the back of the motorcycle until we’re no longer in sight? Do I look at my feet to avoid stepping in piles of manure or look up to avoid the 1,000 kilo cow lumbering towards us with no presumed plan to change its path? Ahh, but how can I not focus on the small pig that suddenly scurries a foot below me in the concrete slab-covered drainage system of the road? Laundry hanging across rooftops, vegetable cart rolling through, steam rising from an open wok.

As the road narrowed and drove us deeper into the heart of life in Agra untouched by tourists and outsiders, our presence became more and more of an anomaly. Retracing our steps, we returned through the commotion of evening activity back towards the chorus of honking, left the ‘village life’ tucked between the blocks of cement buildings and hopped on a rickshaw with the understood one word request, “Taj!” 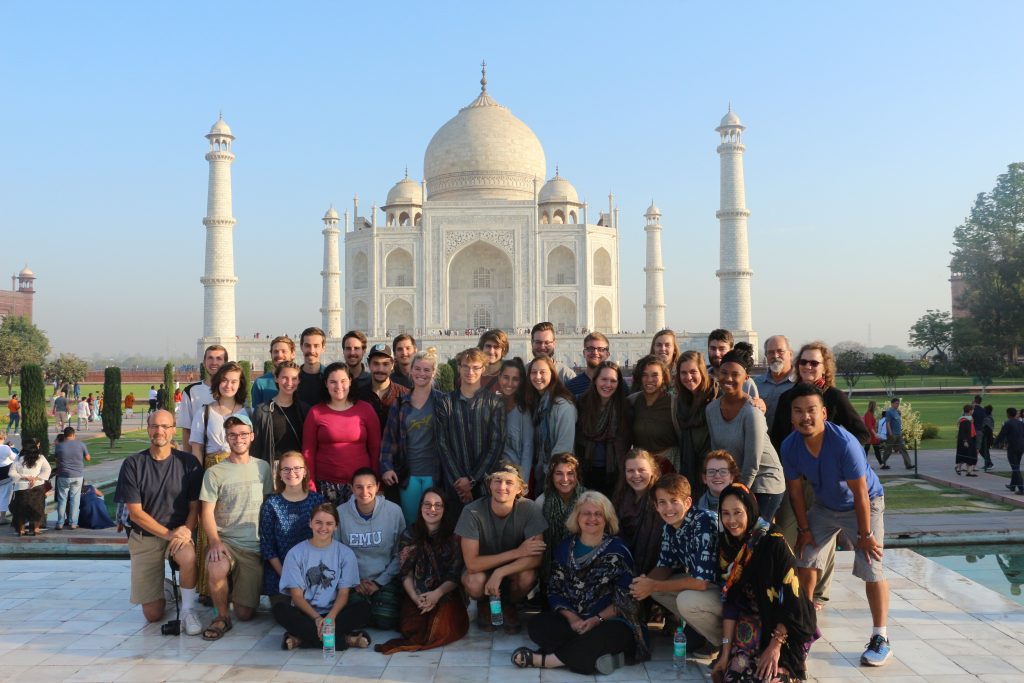 Five minutes later, our rickshaw driver dropped us along the outskirts of the Taj, a paved, well maintained area blocked off to vehicles. We were no longer an anomaly as we walked along the identical, over meant constructed shops filled with all of the Taj trinkets you could ask for – t-shirts, magnets, small replicas, pieces of the marable used for the Taj Mahal itself, caps with its outline stitched on front. The streets full of sunglass-donning, visor-wearing tourists glowing in their sight-seeing-best attire from their recent visit and, no doubt, photoshoot in front of the Taj.

Drifting from the clean, well-swept streets, we found ourselves in a bazaar outside of the Southern gate of the Taj. Congested and chaotic, each step was met with a new smell, a “shopping?,” called in our direction, children rushing to our legs, hands to their lips asking “chocolate?,” rickshaws pulling into our path and a swirl of people and color. After wandering through random streets for some time, a navigational nightmare for poor Abigail but a whirlwind of energy and excitement for us both, the setting sun cued our meandering return to the quiet of the Taj and throngs of hopeful rickshaw drivers. Fifty rupees and a short few minutes later, we made it back to the quiet of our hotel.

The next morning we woke at sunrise, waited in the long line of tourists, got our passes, water bottles and shoe-socks and walked through the main gate of the Taj. As it entered our view, first thoughts included “wow, that’s big,” “wow, that’s small,” “wow, that’s white” and “dang”* coupled with feelings of awe at its magnificence. Inlaid stones and Arabic script embellished with intricacy, striking symmetry, and mosques on either side paying homage to the radiance of its white marble against the blue sky.

Taking the trademark India tourist ‘I’ve been to the Taj’ photos, we spent the rest of the morning admiring this symbol of love, the love of the emperor Shah Jahan for his wife, before returning to the hotel for breakfast.

The beauty of the Taj was spectacular. Mesmerizing. Yet in that space, I was reminded that the magnificence of India does not lie solely in its iconic wonders, but in its energy and noise, bustling streets, the swirl of people, the smells and contrast and color.

After a day of sights, we loaded up and headed to our next destination, Amritsar, redefining what India looks like once again.