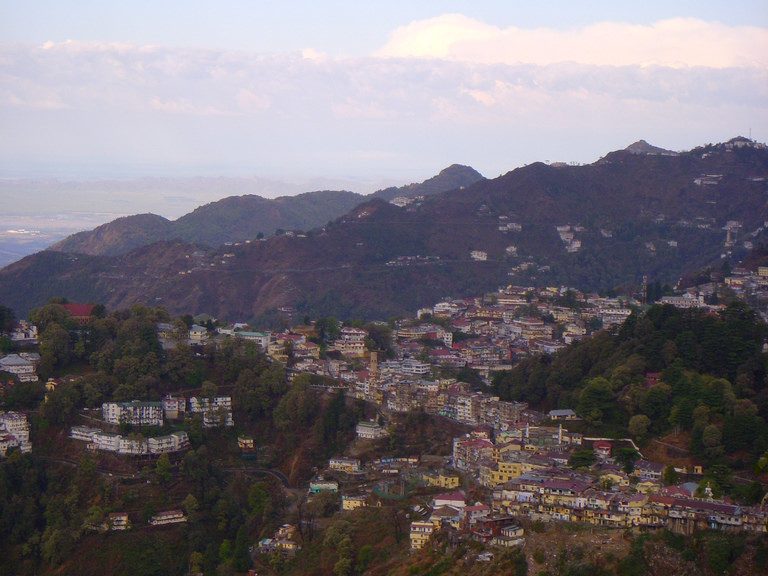 Mussoorie has carried with it more anticipation than any other stop on this trip for me. Although I enjoyed our racing around Rajasthan for two weeks, my mind and body were exhausted and looking forward to resting in one place for some time. As we boarded our third and final overnight train ride, I couldn’t help but picture vast expanses of the Himalayas, and nestled right in the middle of all the grandeur, Mussoorie.

The train itself brought with it some challenges. My nose was assaulted with the scent that only sitting directly next to a bathroom can provide. My bed was chronically slanted towards the wall, subtle enough that it was unnoticeable when I was sitting up or pressed against the wall, but extreme enough that I would slide back into the wall whenever I eventually forgot about my situation  and rolled over. However, even though it may have been grimy and uncomfortable, I knew in that moment having a bed and roof over my head with a guaranteed breakfast in the morning was more than mass amounts of people could say – a thought that has been ever present on my conscience since arriving back in January.

After a long night of restless sleep and a lot of skidding into the wall, I was greeted with the alarm of our tour guide, Tsering, running up and down the halls playing “Country Roads” by John Denver and singing along very loudly, only stopping to surrender into laughter and tell us to wake up. As is custom in India, the train was delayed 40 minutes, giving us time to relax and watch the country go by. Time passed quickly and we were soon shepherded across the road from the station into five vans, which carried us through manic traffic until we were soon on our way up the long, winding, steep roads into Mussoorie.

Upon arrival, we were greeted at Doma’s Inn – owned by our tour guides, the Nima’s – which did not disappoint. The inn was anything but bland. Outside was primarily bright red with streaks of blue and yellow, not much changed on the inside. We immediately began exploring and understanding the pristine landscape we would be able to call home for the next two and a half weeks. I was ecstatic because I, as well as many of our group, thrive when surrounded by mountains. Being drawn to its beauty, adventure, and challenge, I’ve

had a fascination and desire to visit this mountain range since early elementary school. Downtown Mussoorie was a stone’s throw away, but we learned quickly that going anywhere meant negotiating long, steep hills. Battling exhaustion but fueled by curiosity, we soon saw shops lined one after another ranging from shoemakers, hair stylists, fabric benders, restaurants, and many more! After climbing into bed, exhausted from a combination of walking and altitude, I quickly fell asleep. We then began a routine of breakfast at 8, Hindi lessons from 9-11, and our cross-cultural class from 11:30-12:30. With afternoons absent of classes, they ranged from total freedom to different excursions, such as guided hikes and tours from Tashi and Tsering.

Our rafting adventure was broken into two days. The first day we had a safety briefing and went over basic rescue techniques with our instructors. We had a rather lazy day only navigating one technical class 4 rapid called “the Wall.” We had a few opportunities to jump into the Ganges River and float around. It was very cold, coming down from the Himalayas. After a few minutes, when your body goes completely numb, it becomes much easier to enjoy the beautiful surroundings. For the most part, everyone was nervous to go swimming. At the end of our first day we played the paddle game – a game where everybody stands in a circle with a paddle. The leader calls out “left” or “right,” and you have to grab the paddle beside you before it hits the ground. As people get eliminated the increasing gap moves and it is harder to get to the next paddle. We had a fantastic day on the river and I am sure most of us were wiped.

The second day was packed with much more action. We went through a lot more rapids, some of which were named “Return to Sender,” “Roller Coaster,” and “Golf Course.” While navigating one of the class 3 rapids, our instructor told us to jump out and go swimming. I was a little shocked at first when Ben and Aaron first jumped and decided to jump out myself. The water was very turbulent and powerful. It was exciting and even a little scary being thrashed around so violently in the whitewater. Later, we got an opportunity to do a little cliff jumping. The rafting trip was a ton of fun and we got to do things that would not have gone over well in the States. Rafting will surely be one of the more memorable parts of the trip.

Perched on the counter,

as there’s no chairs,

Monkeys terrorize as I

take up my new friend:

How I adore your adventurous spirits

How your innocence and energy radiate.

A three hour trek both to and fro, just to gain

knowledge and growth in not only

academic studies, but in character.

How I adore your enthusiasm

Never let that spark in your souls die.