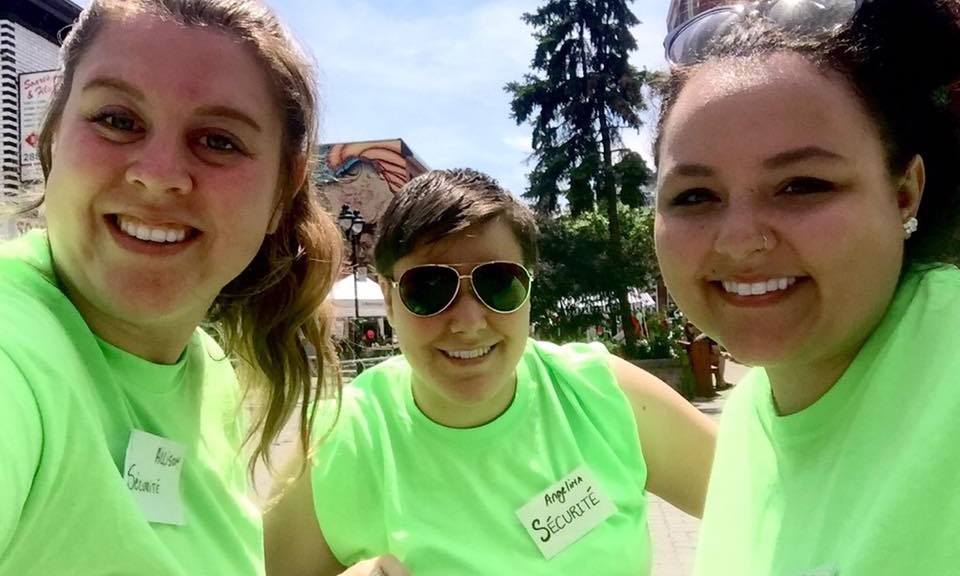 At the urban agricultural fair, I had two roles; I was security and a replacement.  As security, my job was to let people and cars through the barrier that were setting up booths for the fair and to prevent other cars from driving through the street while the fair was being set up and going on.  I was wearing a green t-shirt to signify that I was a helper, so I had a lot of people come ask me questions about where to go to find certain things or what exactly the fair was for.  A struggle with this job was that some of the people (especially some older people) did not speak any English, so when they asked me a question I could not give a good answer; I would occasionally talk to someone that spoke only French that would be frustrated with me because I could not speak French, but thankfully that did not happen very often.  As security I also greeted people as they came and went from the fair, and I counted at each hour of my shift roughly how many people were at the fair.  As a replacement, I walked around the fair for about an hour and asked any of the volunteers if they needed anything like water or a break to use the restroom.  I also went around and counted the number of people for one of the security people so she could record it without having to leave her post.

There were several interactions that I would like to share.  The first interaction was early this morning at around 8 am when there were cars trying to get through so the people could set up their booths.  I approached a car that was stopped in front of the barrier and he started to explain, in French, what his booth was or why he needed through.  I smiled, apologized, and said I am sorry but I do not speak very much French.  The gentleman laughed in a light way and said, “No French, huh? How old are you?”  I replied that I was nineteen years old and currently learning French and he said, “In five years I expect you to be completely fluent in French.”  I smiled and said, “I’ll do my very best!”  The gentleman smiled and laughed, and I moved the barrier so he could get through to set up his stand.  Another interaction I had was with a woman that spoke both French and English very well.  She initially started talking to me in French after I said bonjour, but I apologized and told her that I did not speak very much French.  She smiled and said no problem; she spoke English extremely well, which was really neat after hearing her talk so fluently in French.  Then the woman asked me what exactly the fair was, and I explained that it was an agricultural fair that the Masion de l’Amitie organizes each year.  I said there are presentations, food, and plants that people can watch or buy, and that the fair is just an attempt to make the city a little greener.  She smiled and thanked me for my help and continued on her way.  Although both of the interactions may seem fairly commonplace, they were both similar in several ways and were interactions I had not yet experienced during my time here in Montreal.  First, both of the people were asking for my assistance in some way, and secondly they both initially started out talking to me in French after I said hello in French; fortunately, both quickly realized that I could not understand them.  They were both new experiences for me because I have not actually had a real conversation with any of the people here in Montreal, so it was nice to be able to talk to them and help them with any questions they had.  Also, during my time here I have been so used to asking other people for help when it comes to getting around, so it was really nice to be able to be a part of the agricultural fair and feel like I was helping out.

In our neighborhood, La Maison de l’Amitié was responsible for organizing the urban agricultural fair. As a volunteer, my job lasted from 7:30 – 9:00 a.m. on Saturday. The work consisted of getting tents and four water bottles to the proper areas, setting up the stereo for the microphone, putting the tents up, providing a chair at each tent, and cleaning up the front of La Maison de l’Amitié. Basically, I was the right hand man for one of the people in charge. Though I do not know why I was chosen, hopefully the person felt my help was sufficient. Whenever he needed something completed, he would always look at me. The fair was ready for attendees, and it did not disappoint. There were probably hundreds of people in line for free plants, free compost, and mango. After my shift and breakfast, it seemed like the best thing to do would be to see if additional help could be provided. This must have been a good idea, because Lauren and Alli needed assistance greeting people into our event. It was the perfect opportunity to practice my French speaking skills. Most of my conversations were basic; however, like “hello”, “how are you”, and “have a good day.” Most people appreciated my attempt to speak in their language. They would say “merci” or use another phrase that I did not understand. At first, I could not pronounce “bonne journée,” but I figured it out later on in the day.  A vegan lunch was provided for volunteer members at 11:30 am.  Overall, the urban agricultural fair went well for the street of Duluth, in my opinion. It made the city even more green and beautiful. The atmosphere was light-hearted and everyone seemed happy.